In the South Korean market, shares in Asiana Airlines soared 11.9% on Friday (despite the Korea Composite Stock Price Index slipping 0.5%). Over the week, Asiana's shares rose 40.2% and are now trading at the highest level since Jun-2008. The carrier stated it expects record 1Q2010 results, with passenger and cargo traffic reportedly increasing 31.2% and 27.6% year-on-year, respectively.

The result is reportedly prompting creditors in the parent Kumho Group to consider giving Asiana more time to recover without creditor involvement. A decision regarding Asiana is reportedly expected to be announced at the end of Apr-2010. However, a key concern remains Asiana's high debt levels, currently standing at KRW3.7 trillion (USD3.3 billion), and reportedly increasing by KRW200 billion (USD181 million) p/a due to interest expenses.

The "worst is over" with premium demand recovering: ANA CEO

Also in North Asia, All Nippon Airways President and CEO, Shinichiro Ito, in an interview with Bloomberg, stated the "worst is over", with premium demand showing signs of "recovery". ANA's shares surged 5.2%.

Qantas CEO, Alan Joyce, also reiterated that Business demand is recovering, but added that some markets are improving more strongly than others, with the UK and US remaining relatively weak. Leisure demand has also remained strong for the carrier, despite repeated interest rate increases in Australia. Qantas' shares rose 0.7% on Friday.

Meanwhile, shares in Air New Zealand gained 2.1% (setting a new two-year high in intra-day trading) on optimism that the Rugby World Cup will stimulate demand in 2011. The carrier also signed a codeshare arrangement with Continental Airlines. 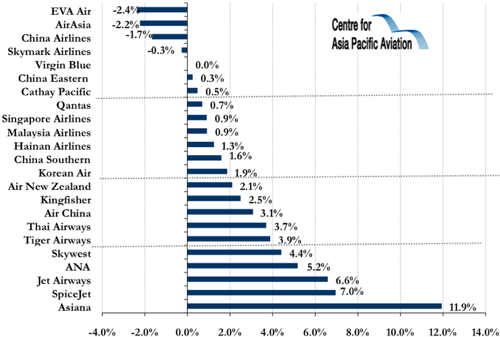