Asiana Airlines’ shares slumped 5.7% yesterday, on fresh concerns regarding the outlook for its parent, Kumho Asiana Group, after the Group’s owners rejected a demand by creditors that they offer their stockholdings and assets as collateral for fresh loans by a 07-Feb-2010 deadline.

Stock trading of Kumho Industrial shares was suspended by the Korea Exchange yesterday (but will resume trading today) on mounting speculation that the ailing firm would undergo court receivership from the current debt rescheduling programme.

However, subsequent to the market close yesterday, the company’s creditors and controlling family reached an agreement in an emergency meeting that private assets of the group’s owners would be put up for collateral for fresh loans, as a means to save the group from a liquidity crisis.

On the other end of the spectrum, Hainan Airlines’ shares jumped 4.8% yesterday, on news that the Beijing Municipal Government signed a strategic cooperation agreement with HNA Group on 07-Feb-2010, to inject capital, reportedly through Beijing Tourism Group (BTG), into HNA subsidiary, Deer Jet, and to relaunch the carrier as Capital Airlines. HNA Group and BTG are reportedly still negotiation the amount of investment and the shareholding structure although HNA Group is expected to remain the controlling shareholder.

China Eastern “actively pushing ahead with introducing a strategic investor”

Also in China, China Eastern Airlines' GM, Ma Xunlun, stated the carrier is “actively pushing ahead with introducing a strategic investor”. The carrier added that it is attempting to remove its domestically listed shares from the Shanghai Bourse’s “special treatment” list (the carrier received special treatment, a daily trading cap of 5% in either direction, after reporting two straight years of losses. The usual cap is a 10% movement).  To be removed from the list, China Eastern must secure profitability in its main operating business.

Goldman Sachs has revised its earning outlook to reflect a “swifter than expected recovery in domestic yields, as well as an improved outlook for V Australia”, while RBS commented that "management continues to paint a cautious picture for the remainder of FY10 given volatility in the markets, but we note the increasingly positive tone of outlook commentary and we see conditions continuing to strengthen”. RBS added, “we therefore wouldn't be surprised to see the FY10 result come in at least towards the top end of the guidance range”. 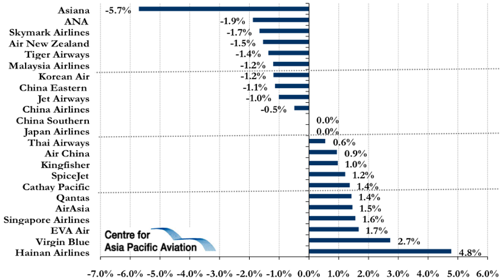