Asian carriers continue to record healthy passenger growth as demand in the region increases rapidly enough to keep up with the additional capacity. But the cargo market, which Asian full-service airline groups rely on more than carriers from other regions, remains weak, impacting overall profitability. Asian low-cost carriers are in a better position relatively as they carry limited amounts of cargo and nearly all their capacity is allocated to the fast-expanding intra-Asia market.

Asian carriers of all types continue to benefit from rapid passenger growth in short-haul and medium-haul markets within Asia. The weaker economic conditions in Europe and North America impacted long-haul traffic in 2012 but overall there was still healthy growth. 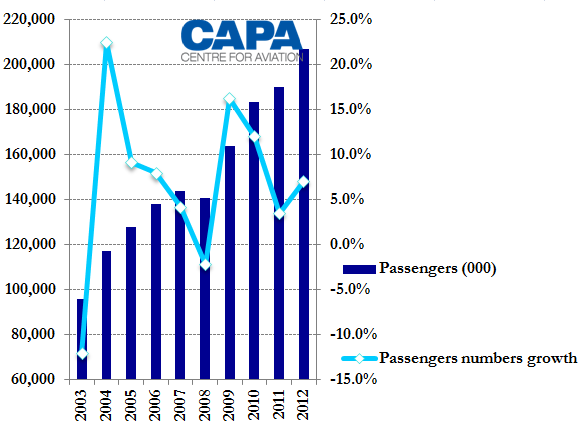 No signs yet of over-capacity in Asia

Encouragingly, warnings from early 2012 of potential excess capacity and lower load factors for Asian carriers proved to be false. The average load factor reported by AAPA grew by 1.5ppt from 76.4% in 2011 to 77.9% in 2012 as the 6% RPK increase outstripped the 4% ASK increase. This essentially reversed the 2ppt load factor decline from 2011, when there was a 6% ASK increase but only a 4% RPK increase. 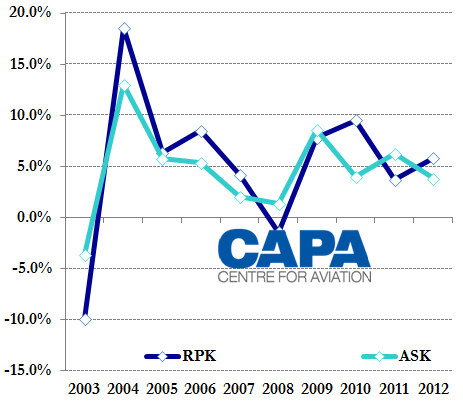 The faster passenger growth compared to RPK growth illustrates the relative strength of the short-haul market. The faster growth of traffic within Asia compared with to/from Asia, a trend which continued in 2012, reflects in part the stronger economic conditions in the region compared to other parts of the world.

Growth of LCCs contribute to growth on intra-Asia routes

But the rapid growth of Asian LCCs over the last decade also has been a major contributor to the relatively faster growth in the intra-Asia market as lower fares have stimulated demand. In 2012, LCCs accounted for about 24% of seat capacity within Asia-Pacific, compared to only about 2% in 2003, according to OAG data. 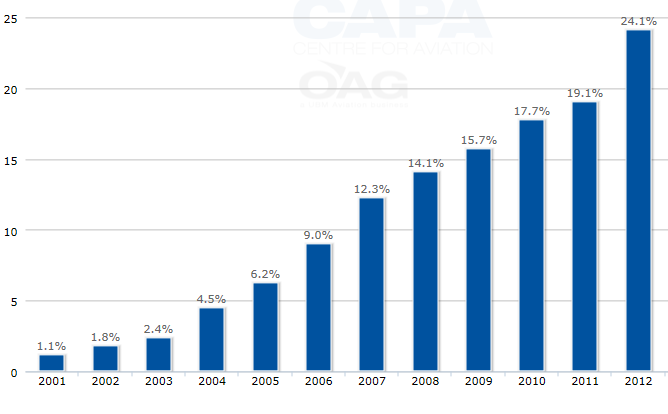 Source: CAPA – Centre for Aviation & OAG, a UBM Aviation business
Note: the jump from 2011 to 2012 was driven primarily by OAG’s re-classification of Indonesia’s Lion Air from FSC to LCC.
Lion is the second largest LCC group in Asia, accounting for about 15% of all LCC capacity within Asia-Pacific.

AAPA figures include 25 airline groups, including its full-service carrier members and LCCs which operate international services and publicly report their traffic figures, such as AirAsia. The AAPA figures also include major full-service airlines in China, Australasia and Vietnam, where the group currently does not have members. South Asia is not included as the AAPA representation area only includes East Asia and Australasia.

While LCCs now account for nearly one-quarter of total capacity within Asia-Pacific, most of this capacity is allocated to the domestic market. Several Asian countries – including Indonesia, Malaysia, the Philippines and Thailand – have large domestic markets with LCCs accounting for over half of total capacity. The continued growth of LCCs in these countries is expected to drive overall rapid growth in the dynamic Southeast Asian market in 2013.

See related article: Southeast Asia poised for another year of growth in 2013

Therefore the LCC portion of AAPA’s international passenger figures reported is rather small and the LCC portion of the association’s RPK figure would be almost negligible. AAPA, which does not represent any LCCs, often points out that LCCs have only about a 10% market share globally when comparing revenues or RPKs.

Only full-service carriers, however, are exposed to the current weaknesses in long-haul markets and in cargo. The continued weak cargo market is particularly a concern as it significantly impacted Asian carriers’ performance in 2012 and will again in 2013. “This is a big headache for Asian carriers,” AAPA director general Andrew Herdman said at an AAPA media briefing on 06-Feb-2013.

Mr Herdman pointed out that Asian carriers account for over 40% of global FTKs and in “good years” cargo accounts for 30% to 40% of revenues at some AAPA members. AAPA reported a 3% drop in FTKs for 2012, which followed a 5% drop in 2011. These declines wiped out a big increase in 2010, when a need to re-stock inventories created a nice rebound and provided what has proven to be false medium-term optimism. AAPA’s FTKs also dropped in 2008 and 2009, meaning cargo traffic among Asian passenger carriers have now declined four out of the last five years. 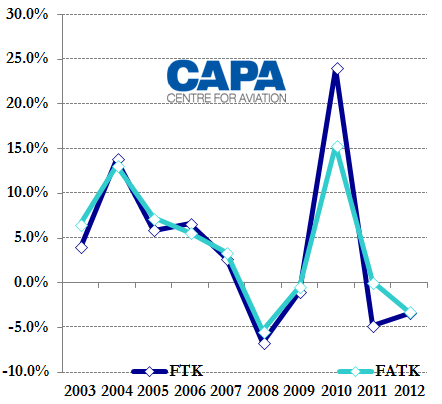 Asian carrier cargo traffic in 2012 was only 5% higher than 2007. Mr Herdman pointed out that this five year period of essentially no growth is challenging to manage because Asian carriers five years ago had fleet plans which envisioned cargo growth of about 5% per annum. As a result, the industry is now faced with excess cargo capacity, even with carriers parking a large portion of their dedicated freighter fleet.

The situation is exacerbated by the gap between the cargo and passenger growth. Since 2007 AAPA RPK figures have grown by 29%. Asian carriers have added aircraft to accommodate this growth, including a large number of widebodies, resulting in more space for belly cargo. Asian carriers have had to lower cargo rates to fill up the capacity, leading to a steep reduction in cargo yields.

Mr Herdman warned that cargo yields are unlikely to recover in 2013 because even if demand improves, which is possible in the second half of the year, there will still be a demand-supply “mismatch”. He said this has put Asian carriers which have large cargo businesses “in a very tough spot”.

While there are indications the global economy is improving, the growth is not fast enough to create any surprises at the retail level. Mr Herdman explained that without such "surprises" supply chains will continue to be run at minimum levels, leading to continued weak demand for air cargo.

Demand on the passenger side, however, continues to grow – even in the relatively weak European market. Global economic growth of about 3% may not be sufficient to lead to changes in the way supply chains are managed but are sufficient for people to not forego holidays or business trips. “I think continued growth in passenger traffic is reasonably predicable,” Mr Herdman said.

But he added that intra-Asia growth will likely continue to be faster than long-haul growth. Some Asian carriers also have been increasing marketing activities, through sales and promotions, to stimulate enough demand to keep aircraft full, particularly on long-haul routes. While this could potentially impact yields, overall the outlook for the Asian passenger market remains relatively bright. As CAPA reported in Nov-2012, following the AAPA annual general meeting in Kuala Lumpur:

Asian airlines have continued to be more profitable than their counterparts in other regions and are again expected to account for about half of the global industry’s profits in 2012 and 2013. “Asia Pacific generally is more profitable,” Mr Herdman says.

Asian carriers are fortunate to be in the region with the most robust passenger growth. The 5% growth in passenger traffic for 3Q2012 may seem weak by Asian standards but is strong relative to other regions. Mr Herdman points out that half of the world’s traffic growth over the next two decades is forecasted to be to, from or within Asia. 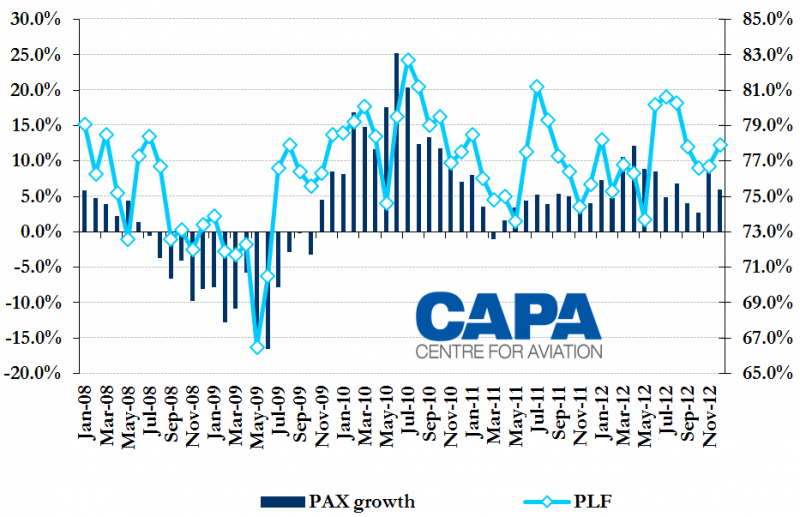 Mr Herdman said, “altogether it was a pretty good year” given the economic situation in Europe and the threats of the fiscal cliff in the US. The outlook for 2013 is still positive even as some Asian carriers continue to turn to promotions to maintain their relatively high load factors.

Singapore Airlines (SIA), for example, reported on 07-Feb-2013 a 6% drop in yields for the quarter ending 31-Dec-2012 as “promotional activities” were initiated to boost traffic levels. RPKs at SIA were up 7% for the quarter as the carrier’s load factor improved 2.1ppt to 79.3%.

Asia’s all-important premium market seems to be holding up

Some long-haul carriers in Asia, or serving the Asian market from other regions, have also been engaging in steep discounts for premium travel. But AAPA remains relatively upbeat about the premium market as local business demand remains strong, including in the intra-Asia market, and there is still a need for corporations in other parts of the world to come to Asia to do business.

AAPA is also not too concerned about the potential prospect of over-capacity as a result of the large number of aircraft on order by Asian carriers, including LCCs. Mr Herdman pointed out that new aircraft tend to “trickle in” rather than arrive in one big batch and that “aircraft are movable” if market conditions change. “I really don’t buy the argument of excess capacity,” he said.

While Asia was somewhat surprisingly the second slowest growing region after North America in 2012 (based on IATA figures), over the medium and long term Asian carriers will almost certainly grow faster than carriers from most other regions. As a result Asian carriers will see their share of global RPKs increase significantly from their 31% share in 2012.

The outlook in Asia remains bright with more passenger growth and overall profitability for 2013. Cargo and certain long-haul markets may be challenging but local passenger demand remains strong. 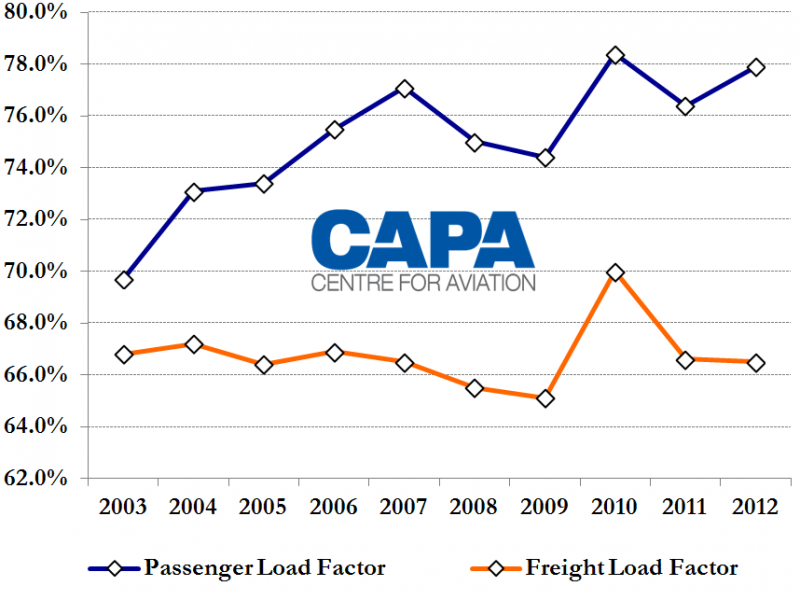 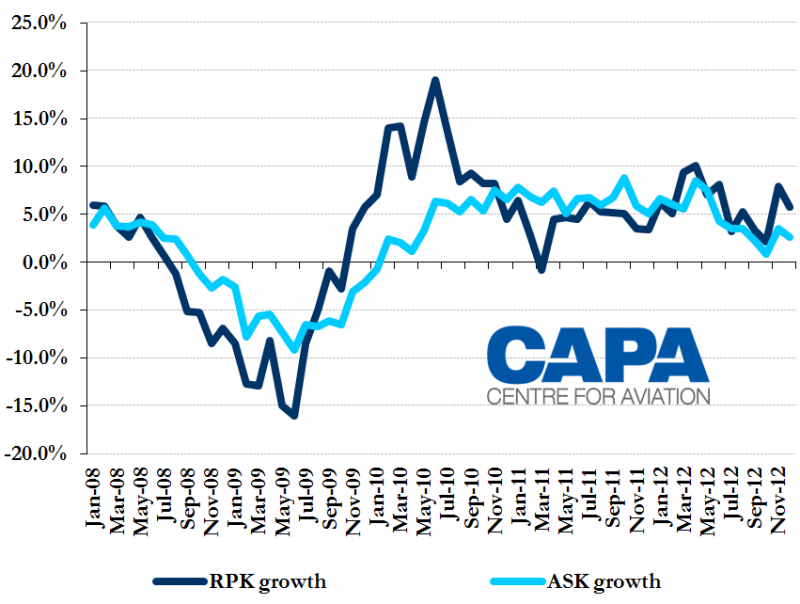 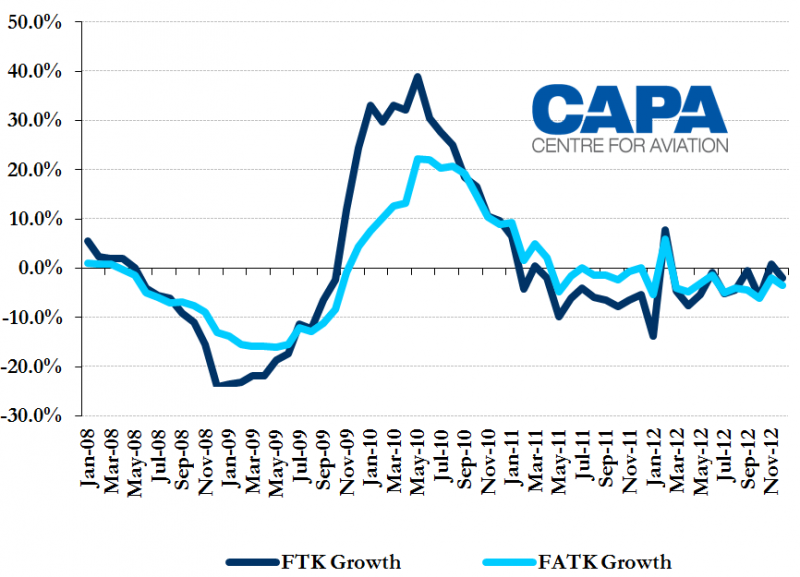