While other parts of the world are beginning to open up to international travel, in most of the key Asia-Pacific markets there is very little progress in restoring cross-border air traffic flows. This represents a major headache for Asian airlines anxiously waiting for revenue opportunities that could help spark recovery.

European countries have been removing some international travel restrictions as their COVID-19 vaccination rates have reached high levels - although progress is lumpy and largely uncoordinated.

But in the Asia-Pacific region, vaccination rates have generally been much slower. New waves of more infectious strains have also made Asian governments more cautious about opening borders, and in many cases even the gains made in domestic markets have eroded due to heightened restrictions.

Vaccination programmes are crucial to airlines’ recovery hopes, as they are widely considered the best avenue for resuming travel. When countries reach herd immunity vaccination levels of 70% or higher, their governments will have more options for removing restrictions.

A cross-section of leading Asia-Pacific aviation executives discussed these issues during the Jun-2021 edition of CAPA Live. They outlined the scale of the challenges faced by airlines and airports, and provided some insights into their short term prospects.

Hong Kong is an example of a market where vaccination rates have been lagging. According to government figures, only 26% of the population had received their first shot as of 15-Jun-2021, and just 17.7% had been given their second dose. While the rate has picked up recently thanks to incentive programs, reaching herd immunity appears a distant target. The Hong Kong government has imposed quarantine restrictions or bans on travel from almost all other countries.

Hong Kong Airlines is a good illustration of how the lack of international traffic has affected the local aviation industry. The airline is down to 10 passenger flights per day, compared to more than 100 before the pandemic, said Ben Wong, the airline’s vice president-operating. It is also flying cargo-only services, which boost its total to 18-20 flights per day.

Hong Kong Airlines is not planning a significant increase in passenger flights until at least the end of 2021, although it may add more cargo services, Mr. Wong said. He confirmed that the airline is currently only operating eight Airbus A330s. Before the pandemic the airline had more than 30 aircraft in its fleet, including 18 A330s.

With revenue from passenger operations in the doldrums, Hong Kong Airlines – like many other airlines – is heavily reliant on its cargo income, said Mr. Wong. The company has already reduced its workforce, and is believed to be planning deeper staff cuts. The challenge for Hong Kong Airlines is balancing its manpower needs to match the company’s weakened condition, while also maintaining key positions and skill levels to prepare for an eventual resumption of services, Mr. Wong said.

The Japanese air travel market has also slumped due to the most recent wave of COVID-19 cases. Domestic passenger numbers in Japan have dropped back to 30% of pre-pandemic levels, with international at 5%, said Japan Airlines Director Tadashi Fujita. The Japanese government imposed a state of emergency in Apr-2021, which has been extended through 20-Jun-2021 for many of the country’s most populous prefectures.

Japan’s vaccination programme has been slow to gather momentum. About 15% of the population had received at least one shot, and just over 5% were fully vaccinated as of 14-Jun-2021, according to the Our World in Data website.

This represents one of the lowest vaccination levels among the world’s major economies. The Japanese government is planning to broaden and accelerate the vaccination program in Jun-2021, with universities and large corporations allowed to set up their own vaccination centres.

The upcoming Tokyo Olympic Games have put extra scrutiny on Japan’s COVID-19 response. The games are due to start on 23-Jul-2021, although foreign spectators will not be allowed to attend. The attendance of domestic spectators is currently to be limited to 10,000 at outdoor events - despite strong objections from many quarters.

While entry into Japan is currently strictly limited, transit demand between Asian countries and North America via Tokyo is gradually increasing, Mr. Fujita said. He predicts that international recovery will start with such transit flows, followed by outbound business travel, then finally inbound travel by foreigners. Leisure travel in general will rebound once vaccination rates increase in the region, but some of the pre-pandemic business travel demand will be replaced by virtual meetings, Mr. Fujita said.

JAL has not had to lay off any staff as a result of the pandemic, Mr. Fujita notes. However, the airline has sent more than 2,000 employees to work in other industries “to diversify their abilities and skills,” he said. This is expected to help the airline’s efforts to broaden its business strategy to new areas when the employees return to JAL.

AirAsia domestic capacity has been kept low by COVID-19 resurgence

Air Asia's international operations are “negligible”, at 0.2% of pre-pandemic numbers, Mr Malik said. For the broader AirAsia Group, which also includes airlines in other Southeast Asian countries, domestic capacity is at approximately 6%, and international at 1%. AirAsia is operating just 7% of the aircraft in its Malaysian fleet, and 10% of its group fleet.

Malaysia is another country where vaccination rates remain low. Approximately 10% of the population has received at least one vaccine injection, with 4.2% fully vaccinated.

The Malaysian market has been severely affected by the country’s third major lockdown, which began 1-Jun-2021 and has been extended until 28-Jun-2021.

A prohibition on most interstate domestic travel will remain in place much longer, however, as the lockdown will be phased out in stages according to progress on vaccination rates and infection numbers. The government estimates that the domestic travel restrictions may not be lifted until the end of Oct-2021.

AirAsia normally flies to 17 domestic airports, but services will probably not be resumed to all of them until late in 2021, Mr. Malik said. In the longer term, a return to pre-pandemic levels of traffic will likely not occur until at least the second or third quarter of 2022, he said.

Singapore’s vaccination rate is a standout in Asia, with 43% of the population having received at least one shot and 32% fully vaccinated. But as with Hong Kong, Singapore’s aviation industry has been particularly hard hit by the COVID-19 crisis due to its lack of a domestic network.

Passenger traffic at Singapore’s Changi Airport is only about 3% of what it was before COVID-19 struck, said Lim Ching Kiat, the airport’s managing director for air hub development. Overall aircraft movements are at approximately 25%, including cargo and other flights as well as passenger services.

Changi has closed some of its terminals and consolidated operations to about a quarter of its normal terminal space, said Mr. Lim. This has allowed it to conduct renovation work on Terminal 2 while it is empty. 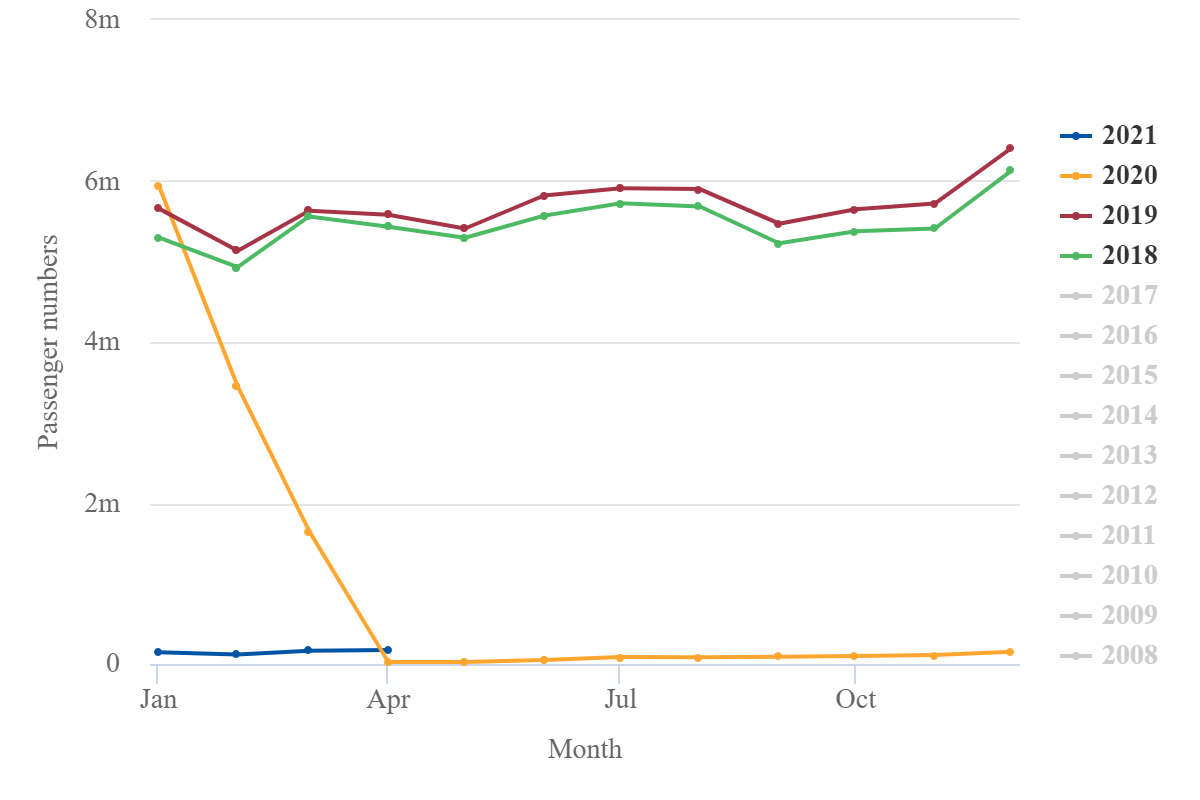 Changi has had to strengthen some of its COVID-19 protocols since a cluster of infections emerged involving airport workers. This has meant separating incoming passengers into “even more precise risk tiering,” Mr. Lim said. Staff practices, training and protective equipment have also been improved.

Looking ahead, Mr. Lim noted that IATA is projecting that international traffic will not fully recover globally until around 2023 or 2024.

However, Changi is looking at a near term interim goal of reaching 30-50% of pre-pandemic levels in the next year or two. “We think that will give us and our airline partners a critical mass to at least move towards cash neutrality”, said Mr. Lim.

A proposed travel bubble between Singapore and Hong Kong will be important to both countries. The arrangement was agreed in Nov-2020, but its launch has been repeatedly delayed due to COVID-19 outbreaks in either country.

Hong Kong was consistently among Changi’s top markets before the pandemic. As recently as Jan-2020, Hong Kong was ranked fourth on the list of Changi’s routes as measured by weekly seats, according to data from CAPA – Centre for Aviation and OAG.

The bubble will be significant in terms of number of travellers, but even more so as a demonstration of how governments can establish quarantine-free travel, said Mr. Lim. It will be one of the first two-way bubbles in the Asia-Pacific region, following the Australia-New Zealand arrangement that was launched in Apr-2021.

Mr. Wong agrees that the benefits of the Singapore travel bubble will be more than just economic. When it is finally established it will increase travellers’ confidence in such bubbles, and will help prove to other countries that mechanisms and safeguards can be put in place to resume travel, Mr. Wong said.

However, Mr. Malik (AirAsia) does not believe bilateral bubbles are the answer to restarting international travel. “Vaccination is the key", he said. “Travel bubbles are too much of a short-term and restricted type of travel.”

AirAsia’s business model is heavily based on its network within Southeast Asia and giving people the option to fly to multiple destinations on the same trip, Mr. Malik said. For this approach “you need the ability to travel [freely] around the region”, rather than just between a few city pairs.

As cases surge in Japan, Malaysia, Taiwan and grow in Indonesia, the Philippines and elsewhere in the region, the willingness of governments to open up to international travel remains limited. But the region's largest market (domestic and international), China, remains highly conservative in its reopening outlook - a position reinforced by a recent outbreak in the key port region of Shenzhen. Even the extremely limited categories of traveller allowed entry to China must undergo several COVID tests and strictly enforced 14-21 day quarantine.

Despite a reasonably well-progressed vaccination programme and very efficiently controlled infection rates, reports suggest that herd immunity cannot be reached before the end of 2021 and that great sensitivity will continue around any significant reopening prior to the Feb-2022 Olympics.

As "a diplomat from an Asian country" was quoted recently as saying in the South China Morning Post, “We don’t foresee China opening borders soon with the pandemic still going on in much of the world and opening for the Winter Olympics is just a maybe. Opening the borders is not only about whether China has achieved herd immunity through vaccination, but also about Covid-19 prevalence in other countries. It will be a reciprocal agreement.”

The perceived success of the Asia-Pacific region in combatting the pandemic has changed dramatically, at least in relation to other regions. Last year many Asian countries were considered models to emulate as they managed to get the initial outbreak under control, while the pandemic swept through the U.S. and Europe.

Soaring COVID-19 infections in the U.S. and Europe have created a greater sense of urgency to accelerate vaccination programmes there. Now, countries in these regions have a high enough vaccination rate that they are able to remove many domestic restrictions, and even contemplate resuming international travel. But most countries in Asia remain much further away from that point.

Admittedly, many Asian nations do not have the same level of health services or resources as in Europe or North America, which makes vaccination rollouts more challenging. However, it is crucial that Asia-Pacific governments – and populations – display more urgency in ramping up vaccination levels. Even a much accelerated programme across the region would be unlikely to create a platform for even limited multilateral reopening of borders before the end of 2021.