Although it has been a dire three years for the Asia-Pacific aviation industry, recovery momentum is finally beginning to build.

The lack of international travel stunted progress in this region relative to other parts of the world. However, most Asian markets have reopened their borders, including three major ones in recent months.

The most significant one remaining is Mainland China.

The following analysis examines some of the trends occurring within the Asia-Pacific recovery, and was presented during CAPA’s Asia-Pacific Aviation Summit in Singapore on 3-Nov-2023.

First we’ll take a big-picture look at system capacity in the Asia-Pacific region.

The chart below shows weekly seat capacity in each of the past four years. The yellow line shows how capacity dropped sharply in early 2020, then recovered to around 60% of 2019 levels later in 2020.

However, this recovery was almost all due to domestic markets.

Then we see a noticeable bump from around mid-2022, as international services begin to increase, thanks to borders opening. 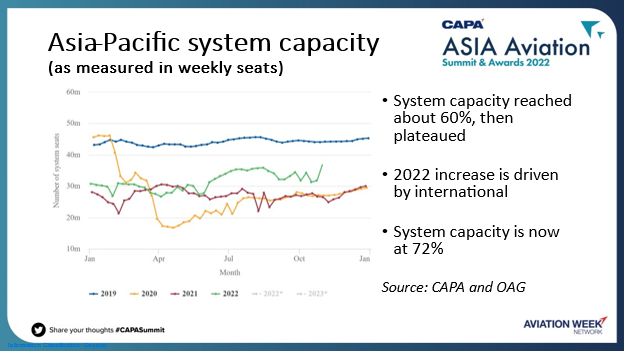 This next chart shows just international capacity in Asia-Pacific.

We can see there is very little growth through 2020, 2021, and early 2022. Then recovery starts to gain strength from around the second quarter of 2022, as more international markets reopened.

International capacity has now recovered to 47% of 2019 levels, and this improvement will continue as some more important markets have dropped their restrictions. 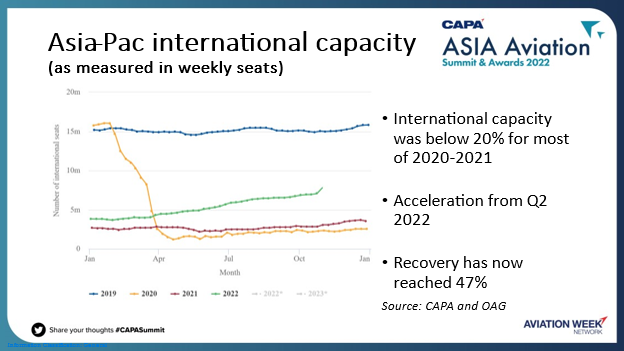 While this international recovery has been welcome, Asia-Pacific countries have generally still been slower to reopen than those elsewhere.

This chart below shows international capacity trends by region since the beginning of 2020.

The bottom purple line represents Asia-Pacific, which is far below the other regions.

In comparison to the 47% international recovery in Asia-Pacific, North America is at 88% and Europe at 86%.

International capacity, by region, as measure in weekly seats, 2022 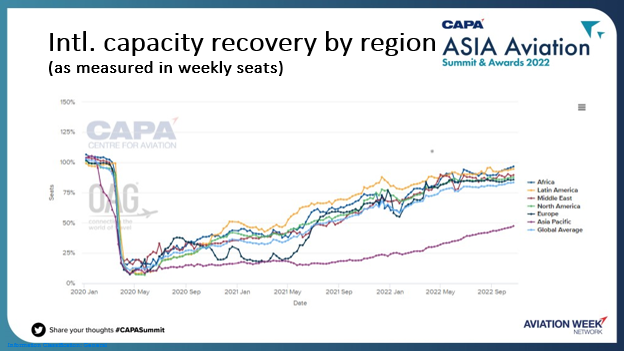 Of course, Asia-Pacific is a very large and diverse region, so there are significant differences amongst its sub-regions.

For example, below are two sub-regions where the recovery is at or above the Asia-Pacific average.

Southeast Asia, on the left, is at 49% of pre-pandemic levels. This sub-region includes markets such as Singapore that wanted to re-establish links because of the importance of their hubs, and others like Thailand where tourism flows are very important to the economy.

The Southwest Pacific sub-region, on the right, has recovered to 58%. When Australia and New Zealand opened their borders there was a quick growth in capacity, although it has plateaued somewhat. 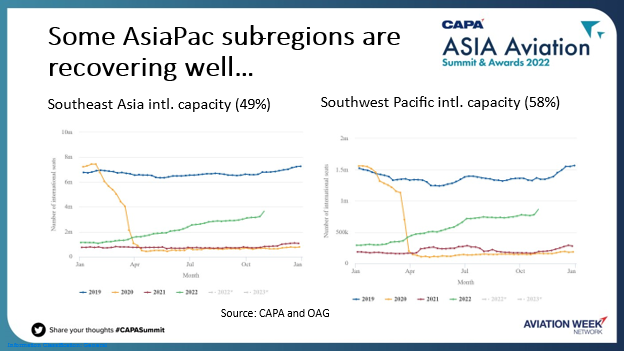 On the other hand, we also have the Northeast Asia sub-region, which is trailing behind. This includes markets where restrictions remained in place longest, such as Mainland China, Hong Kong, Japan and Taiwan. Therefore international capacity is at just 24% of 2019 levels.

Northeast Asia should catch up somewhat as Japan, Hong Kong and Taiwan have recently removed restrictions, although a mainland China reopening remains uncertain. 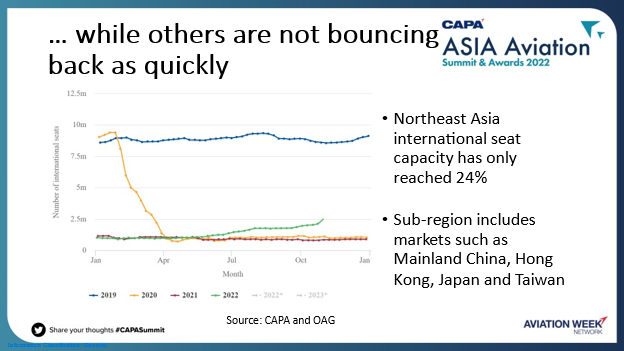 The two ranking lists below show the world’s top-10 domestic routes – before the pandemic and now.

The 2019 list on the left shows that Asia-Pacific domestic routes comprised nine of the world’s top 10 at that time.

The current list, on the right, is actually remarkably similar, which emphasises that the Asia-Pacific domestic markets have recovered well compared with those elsewhere. 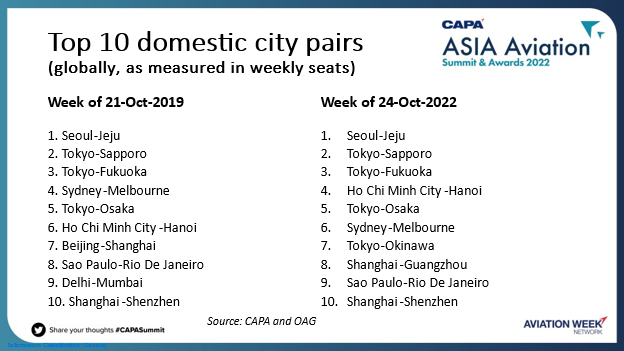 The picture is different for the top 10 international routes, however.

The lists below show that before the pandemic, seven of the world’s top 10 international routes were in Asia-Pacific, including the number-one ranked route.

But fast forward three years, and there are only two from Asia-Pacific in the top 10, both involving Singapore. 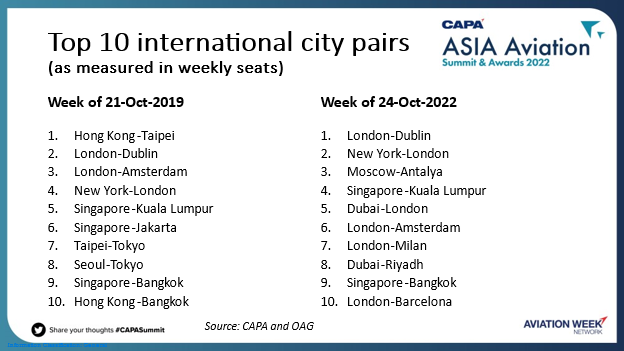 This next chart shows the top Asia-Pacific markets, ranked by international capacity to, from and within the region.

The pre-COVID list, on the left, is led by mainland China and also features Japan, Hong Kong, and Taiwan.

However, Japan is the only one of those four still in the current top 10.

Now, India and Singapore are at the top of the table, indicating their faster recoveries in international capacity. 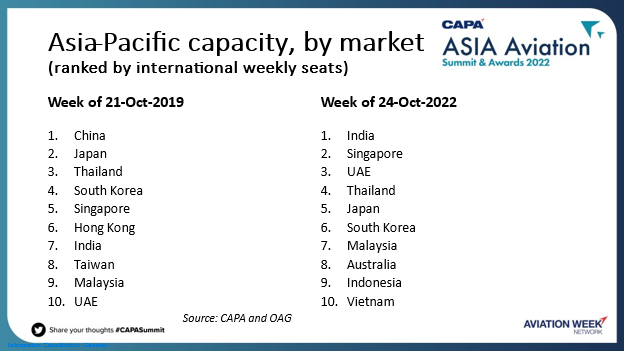 Mainland China is a vital market for the region, but shows little sign of reopening

Now we will take a closer look at the mainland China market, which is very important to a number of Asia-Pacific airlines.

Because China has maintained strict COVID-19-related border rules, international capacity has not recovered. It remains at just 7.3% of 2019 levels. 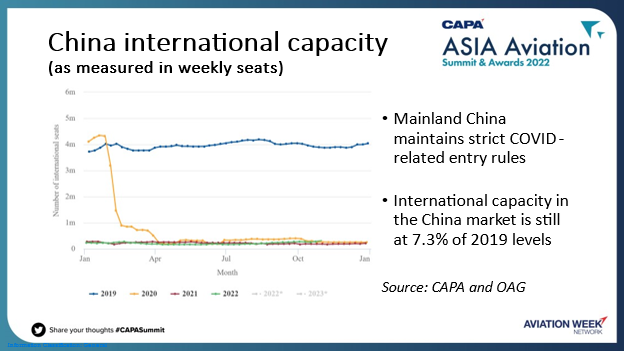 The next charts illustrate the importance of the Mainland China market to some Asia-Pacific countries.

We have picked out Thailand and Vietnam as examples, but the same could apply to any number of other markets.

In both these countries, China was the leading source of visitors before the pandemic. 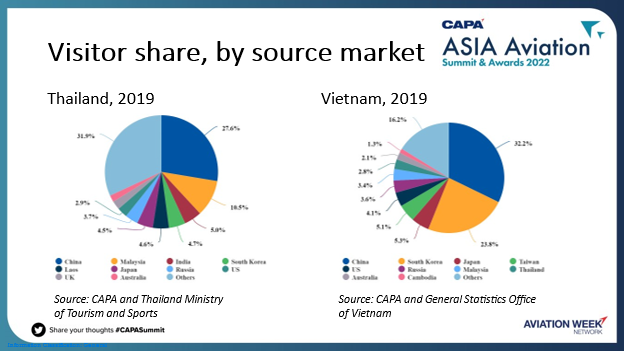 Sources: CAPA and Thailand Ministry of Tourism and Sports/General Statistics Office of Vietnam.

Finally, progress is occurring in Hong Kong, Japan and Taiwan

As mentioned previously, there were three other big Asia-Pacific markets that were slow to ease COVID-19 restrictions.

The next charts illustrate one of the effects of that dynamic.

Depicted below are rankings lists for the top 10 international routes within the Asia-Pacific region.

The chart on the left, for 2019, shows that seven of the top 10 routes touched either Hong Kong, Tokyo or Taipei.

But three years later, only one of these routes makes the list (Seoul-Tokyo).

This situation will change as we move into next year. With Japan, Hong Kong and Taiwan finally relaxing restrictions, routes to their main hubs should start rising up the rankings list again. 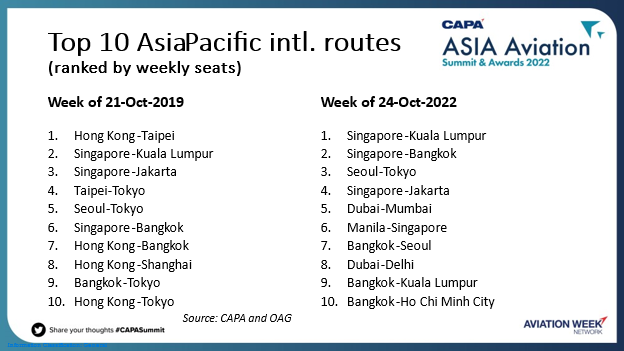 There has been a lot of talk about how the Hong Kong hub, in particular, has been affected by the relatively cautious approach of its government.

We can see on the chart below that capacity remained at skeleton levels in Hong Kong until fairly recently.

There is a noticeable uptick at the right of the green line, representing the increase in airline service following the lifting of quarantine requirements. This momentum should accelerate as more airlines add flights.

It is worth noting that Hong Kong still has some major underlying advantages as a hub, which will reassert themselves eventually.

Something else to note – the dip in capacity in the second half of 2019 was caused by the demand drop that occurred during the wave of protests in Hong Kong. 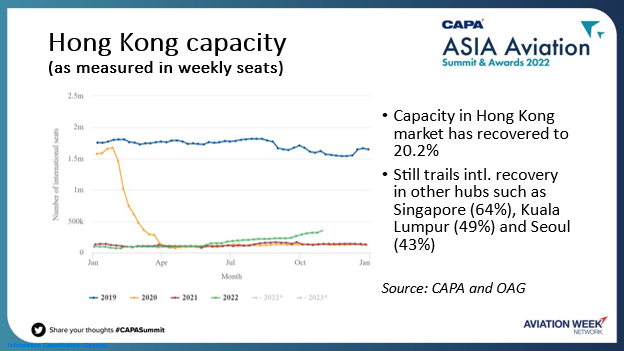 The next chart looks at one traffic flow more closely, between Hong Kong and Japan. While restrictions were in place at both ends, capacity remained at basement levels.

However, there was a slight uptick from mid-2022, followed by quite a sharp climb from Oct-2022 as both markets eased entry rules at roughly the same time.

Cathay Pacific, All Nippon Airways and Japan Airlines are all boosting services in this market, so the rise should continue. 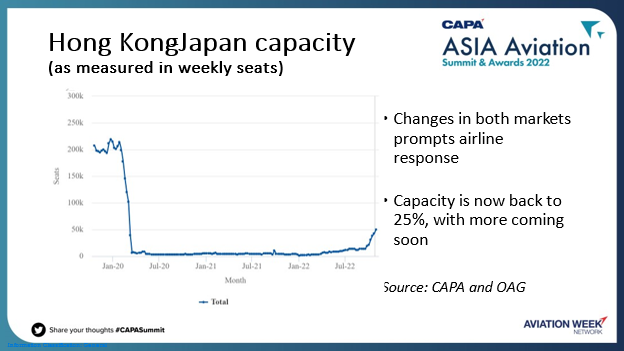 Fleet charts highlight that narrowbodies have returned faster than widebodies

Turning now to some charts derived from the CAPA fleet database.

This one, below, shows the Asia-Pacific narrowbody fleet, and how active and inactive totals have changed through the course of the pandemic.

Narrowbodies were returned to service most quickly, as they were more useful on domestic routes. The total – net of deliveries, retirements etc., has essentially reached 2019 levels.

Asia-Pacific: narrowbody fleet, passenger, in service and inactive, since Dec-2019 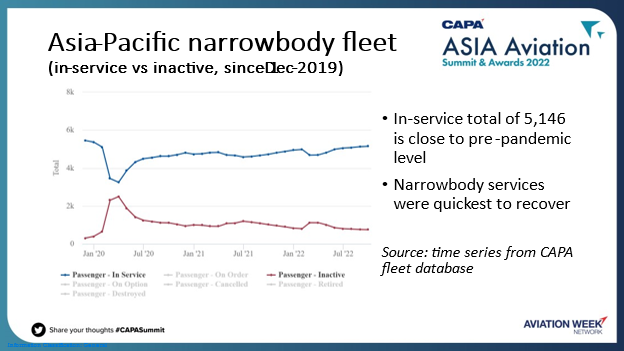 The widebody fleet, on the other hand, has recovered more slowly.

Widebodies generally remained parked longer than narrowbodies, because international and long haul routes were more restricted during the pandemic.

Unlike narrowbodies, the active widebody total is still significantly short of pre-pandemic levels.

Asia-Pacific: widebody fleet, passenger, in service and inactive, since Dec-2019 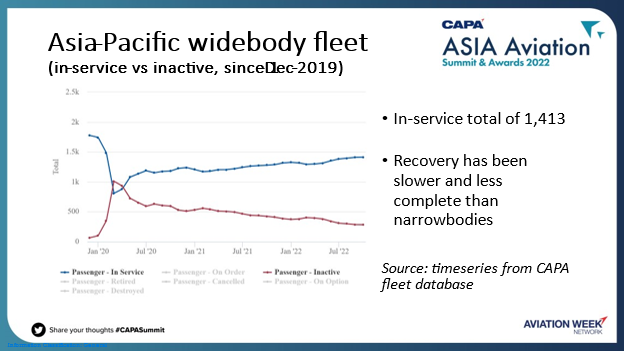 Despite positive trends, some major issues still loom for the industry

In conclusion, there are some longer term questions and challenges facing the Asia-Pacific aviation industry.

The reopening of this market will be key for the recovery of many of this region’s airlines and tourist industries. But the question is: when, and how, it will happen?

A major external risk is the possibility of a financial downturn globally, or in key Asia-Pacific markets. The continuing Ukraine conflict adds to an uncertain economic outlook, and avoiding Russian airspace is posing operational headaches for many Asia-Pacific airlines.

A third issue is the service disruptions and workforce shortages that have already created bottlenecks in air travel in some parts of the world. This has affected airlines, airports and many other related aviation sectors.

Finally – what does the longer term international demand picture look like?

What happens when the initial wave of pent-up demand and so-called “revenge travel” subsides, and more capacity enters the market?

And also, will business and premium travel fully return to pre-COVID levels, or has there been a structural shift?

We will probably have to wait until well into next year until the answer to these becomes clearer.