Asia Pacific full service airlines are expecting a “broadly positive” 2011 according to the Association of Asia Pacific Airlines (AAPA) with the region’s airlines witnessing continuing “robust” demand in both the passenger travel and air cargo markets. Profitability is also returning for the region’s full service carriers, which are driving the industry recovery in 2010.

AAPA Director General Andrew Herdmann stated: “Asia Pacific-based airlines have led the industry recovery this year, benefitting from robust demand for both business and leisure travel, particularly in markets to, from and within Asia. Air cargo has also rebounded very strongly this year, although the reported monthly growth rates are beginning to moderate as supply chain inventories are rebalanced.”

The growth in Nov-2010 follows a 4.5% increase in Nov-2009. Comparatively, every other month of 2010 so far has been off a negative comparison in 2009. November and December were the only months in 2009 that witnessed positive passenger growth. 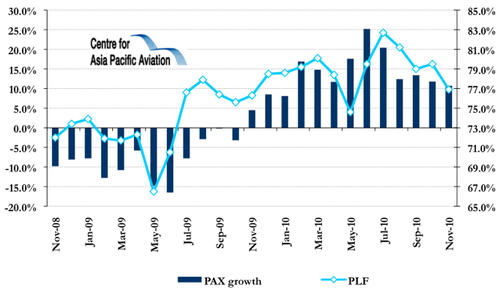 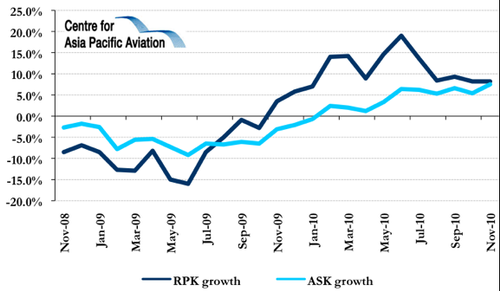 As a result of this demand-supply balance, load factors increased a modest 0.5 ppts to 76.9% for the 16th consecutive months of load factor growth.  Growth is however moderating notably with this trend to continue as carriers in the region add capacity into their systems. 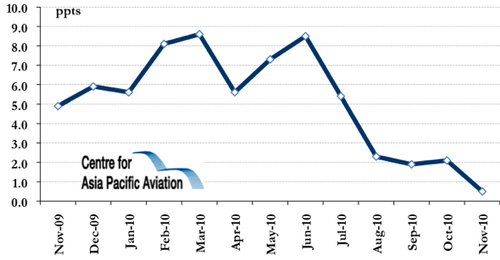 Double-digit passenger and freight growth for year to date

In the 11 months ended Nov-2010, AAPA carriers have witnessed a 13.8% increase in passenger numbers and an even more dramatic 26.3% increase in international air cargo traffic, driven by the sharp rebound in global trade.

International air cargo demand (FTKs) for Asia Pacific airlines increased 10.6% year-on-year following growth of 12.0% in Nov-2009. Freight capacity (FTKs) increased by a similar level – by 10.5% following a 0.9% reduction in the previous corresponding period – resulting in a stable average cargo load factor of 70.7% in the month. 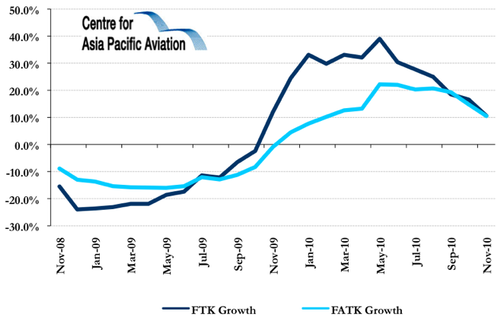 This year has been much improved for Asian carriers which have witnessed an amazingly rapid recovery from the lows of 2008 and 2009. Asia Pacific carriers have successfully managed their way through the downturn and are now on track to report significant improved financial results in 2010. Asia Pacific will be the most profitable region for airlines in both 2010 and 2011 according to IATA.

The double-digit growth rates seen throughout 2010 are however easing back towards their more moderate long-term growth trends. AAPA noted that the outlook for 2011 remains broadly positive given expectations of sustained demand growth.

However, AAPA warned that carriers “need to remain vigilant, and will be carefully monitoring the progress of economic recovery in the major developed markets, as well as the threat of higher oil prices, amongst other challenges, including unwelcome increases in government taxes and charges which undermine the important role played by aviation in promoting positive economic growth and social development”.