Asia Pacific full service airlines are well positioned for a strong performance in 2011, according to the Association of Asia Pacific Airlines (AAPA). The organisation's members saw continued strength in passenger and air cargo demand in Oct-2010, while profitability is improving.

AAPA Director General Andrew Herdman stated: “The dynamic economies of Asia are powering ahead and so are its airlines. Passenger are back in numbers and the return of premium class passengers and freight in particularly welcome. The improving mix of business, coupled with disciplined capacity management, has seen Asian airlines leading the industry in returning to profitability”.

In the latest month of data, AAPA members carried 15.9 million international passengers, an 11.8% year-on-year increase, with “robust” demand for business and leisure travel, supported by particularly strong demand on intra-regional routes. This marks the 12th consecutive month of traffic growth and the sixth consecutive month of double-digit growth. 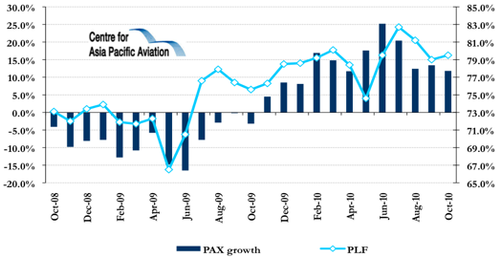 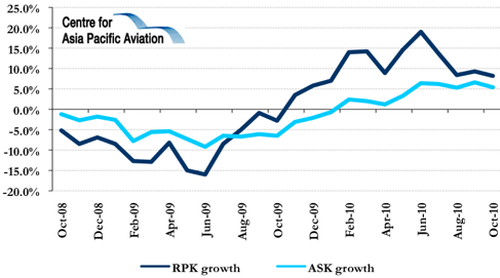 As a result of this demand-supply balance, load factors increased 2.1 ppts to 79.5% for the 15th consecutive month of load factor gains.

In the ten months ended Oct-2010, AAPA carriers have witnessed a 14.2% increase in passenger numbers and an even more dramatic 28.5% increase in international air cargo traffic, driven by the “sharp rebound” in global trade.

International air cargo demand (FTKs) for Asia Pacific airlines increased 16.6% year-on-year. Freight capacity (FTKs) increased 14.8% resulting in a 1.1 ppt increase in average cargo load factors to 71.1%. The trend is easing and capacity is catching up rapidly with demand. The Nov-2010 numbers will be closely watched as to the strength of this year's pre-holidays build-up. 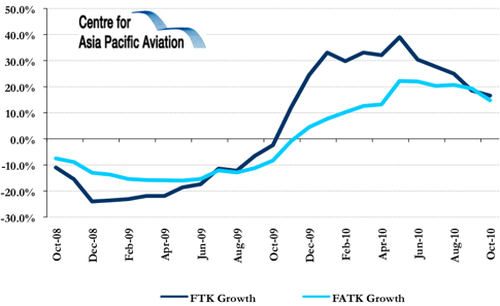 2010 has been a much-improved year for Asian carriers. After the lows of 2008 and 2009, when carriers were forced to rigorously cut capacity, aggressively reduce costs and discount fares to simulate demand, 2010 has provided a welcome recovery.

While the double-digit growth rates seen throughout 2010 are expected to “gently ease back towards long term trends”, the region is still expected to deliver “dynamic growth”, meaning the “overall outlook for Asian carriers for the coming year remains very positive”, according to AAPA.