European airline and airport shares were mostly down yesterday as expected – some heavily – but losses early in the trading session were pared back in afternoon trade as European Transport Ministers decided to reopen most airspace by 06:00 GMT, Tuesday 20-Apr-2010. Only Aer Lingus benefited while Dublin was excluded from the airspace restrictions and Ryanair remained grounded.

However, after trading closed, UK air navigation services provider, NATS, stated that the volcano eruption in Iceland has strengthened and a new ash cloud is spreading south and east towards the UK – raising a whole set of new questions about the likely duration and impact of the volcanic eruption.

According to NATS, “this demonstrates the dynamic and rapidly changing conditions in which we are working”, adding, “latest information from the Met Office shows that the situation is worsening in some areas”.

NATS stated the situation for Northern Irish airports for the morning is “uncertain”, due to the new ash cloud, noting “the latest information shows that Scottish airports should be available from 07:00 and more airspace over England may become available from 13:00, although not as far south as the main London airports.

NATS concluded, “we will continue to monitor Met Office information and the situation is likely to change overnight. We will make a further statement at approximately 03:00, tomorrow, Tuesday 20 April and again at 09:00". 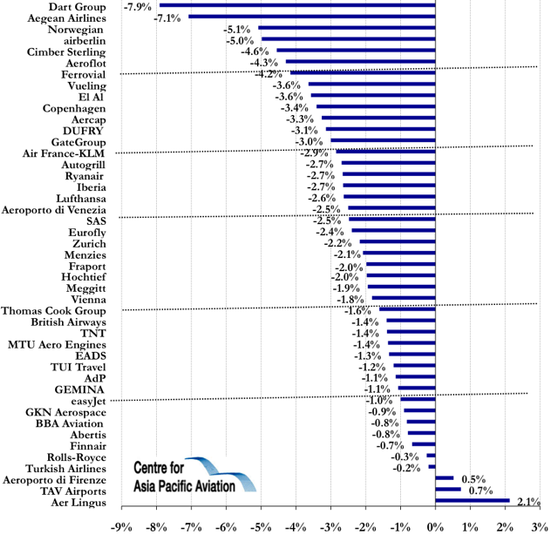 Yesterday afternoon, the heads of ACI EUROPE and the Association of European Airlines, Olivier Jankovec and Ulrich Schulte-Strathaus, stated, “we commend the Ministers and the European institutions for their approach of maintaining safety whilst ensuring that European mobility is no longer compromised. Today’s decision has paved the way for the resolution of what remains the worst disruption to European aviation since World War II. The situation now calls for a full assessment of the financial impact on the aviation industry at large, with an adequate support response at European level.”

IATA was much more stinging in its assessment. Director General, Giovanni Bisignani, sharply criticised European governments for their “lack of leadership” in handling airspace restrictions in light of the Icelandic volcano eruption and urged a re-think of the decision-making process.

Bisignani stated, “we are far enough into this crisis to express our dissatisfaction on how governments have managed it - with no risk assessment, no consultation, no coordination, and no leadership. This crisis is costing airlines at least USD200 million a day in lost revenues and the European economy is suffering billions of dollars in lost business. In the face of such dire economic consequences, it is incredible that Europe’s transport ministers have taken five days to organise a teleconference”.

Mr Bisignani criticised Europe’s unique methodology of closing airspace based on theoretical modeling of the ash cloud. He called for an urgent meeting of ICAO to define government responsibility for the decisions to open or close airspace in a coordinated and effective way based on real data and special operating procedures.

Intense period of recrimination ahead

IATA stopped short of requesting financial support for the industry. But this is almost certainly going to become a theme of future discussions, as airlines, airports, airways and thousands of businesses seek some compensation for a multiplicity of losses.

Law firms will undoubtedly be queuing up for class actions in what will become an intense period of recrimination. The magnitude and variety of financial damage resulting from Europe’s airspace closure will ensure that every aspect of the decision making process and the airspace closure is examined in minute detail in coming months.

It is no surprise that Europe’s Transport Ministers wanted to stay as far away from the process as possible. This was, as Mr Bisignani suggested, a time for leadership and the politicians were found wanting. Hopefully they will now be moved to play more effective roles. Sending warships to fight this battle is not going to win the war.