Argentina airlines: high potential, but a tangle of obstacles

Argentina’s aviation market is a study in contrasts. The more liberalised stance of President Mauricio Macri has resulted in a flood of interest by new operators, and in 2018 Flybondi debuted as the country’s first fully fledged LCC, followed by Norwegian Air Argentina’s market entry as a second low cost operator.

Those airlines, and other Latin low cost start-ups are also working to enlarge their presence on international routes to and from Argentina, even as currency pressure has depressed international demand in the back half of 2018.

But opportunities for growth in Argentina are undermined by infrastructure constraints, economic uncertainty and mounting union opposition. As new airlines work to expand in the country during 2019, they will need to craft strategies to face those challenges in order for Argentina to reach its potential.

According to calculations by the LATAM Airlines Group, Argentina’s trips per capita in 2017 were 0.6 compared with 3.0 for the mature US market. That result suggests numerous stimulation opportunities for airlines operating in Argentina, particularly in moving passengers from bus to air travel.

Up until Mr Macri took office in late 2015, Argentina’s flag carrier Aerolineas Argentinas had a solid wall of protection from the previous government. And while there are no plans to privatise Aerolineas, there have been regulatory changes that have made it easier for airlines to expand domestically and internationally in Argentina. Mr Macri’s government has allowed international airlines to serve Argentina’s secondary markets, and the country’s second largest airline, LATAM Airlines Argentina, was given the freedom to expand.

The more liberalised policies, coupled with Argentina’s low trips per capita, resulted in a slew of new operators aiming to capitalise on the country’s growth potential. Synergy Group launched Avianca Argentina, and the LCCs Flybondi and Norwegian Air Argentina have both launched in 2018.

Flybondi launched flights in late Jan-2018, and by Oct-2018 had built up an 8% share in Argentina’s domestic market. Company management has told the Financial Times that Flybondi aims to end 2018 with a 12% share. 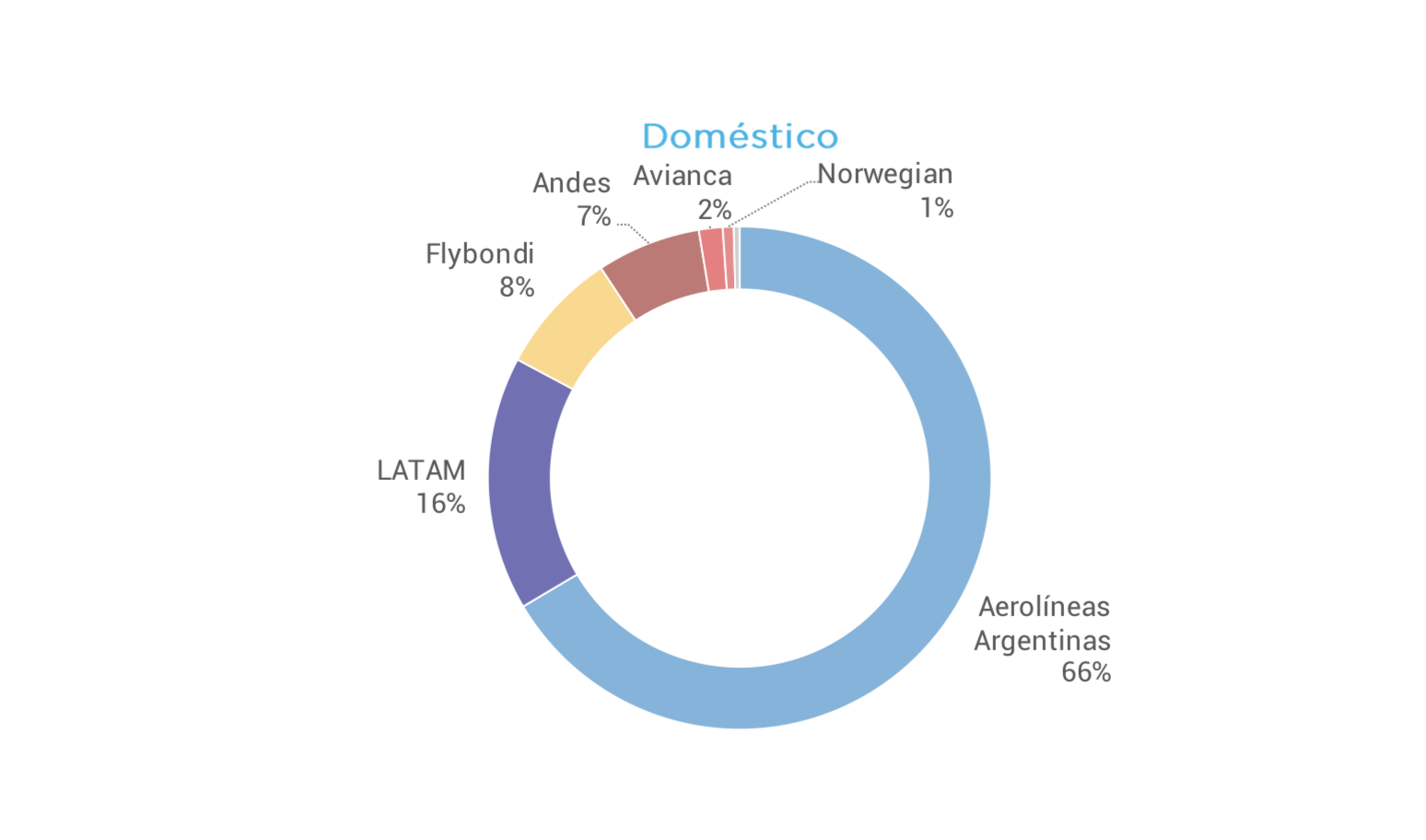 Aspiring LCCs in Argentina received a break when the government opted to lift its long-standing fare floor in the summer 2018 period. The result was likely yield pressure in Argentina, which has also experienced currency devaluation as high as 50% during 2018.

Norwegian launched in Oct-2018, so there are no real trends to glean from its operating data. As of mid-Dec-2018, Norwegian was operating three Boeing 737 narrowbodies and Flybondi's fleet consisted of five 737s.

Flybondi in late 2018 plans to luanch flights from Buenos Aires El Palomar Airport to Asunción in Paraguay, and from Buenos Aires and Cordoba to Punta del Este. Chile’s ULCC JetSMART, which debuted in mid-2017, is planning to launch several routes to Argentina in Dec-2018.

During the past couple of years the full service airlines LATAM, Copa and Avianca Holdings have expanded service to Argentina’s secondary markets, but all of those airlines have cited depressed demand on their international routes to the country as a result of its plummeting currency. Large North American airlines have also cited weakness on their routes to Argentina. Despite the currency headwinds, Copa in mid-Dec-2018 launched flights from Panama City to Salta, its fifth destination in Argentina.

Data from the Argentine government show negative international passenger growth from Jun-2018 to Oct-2018, with the decline peaking 8% in Oct. 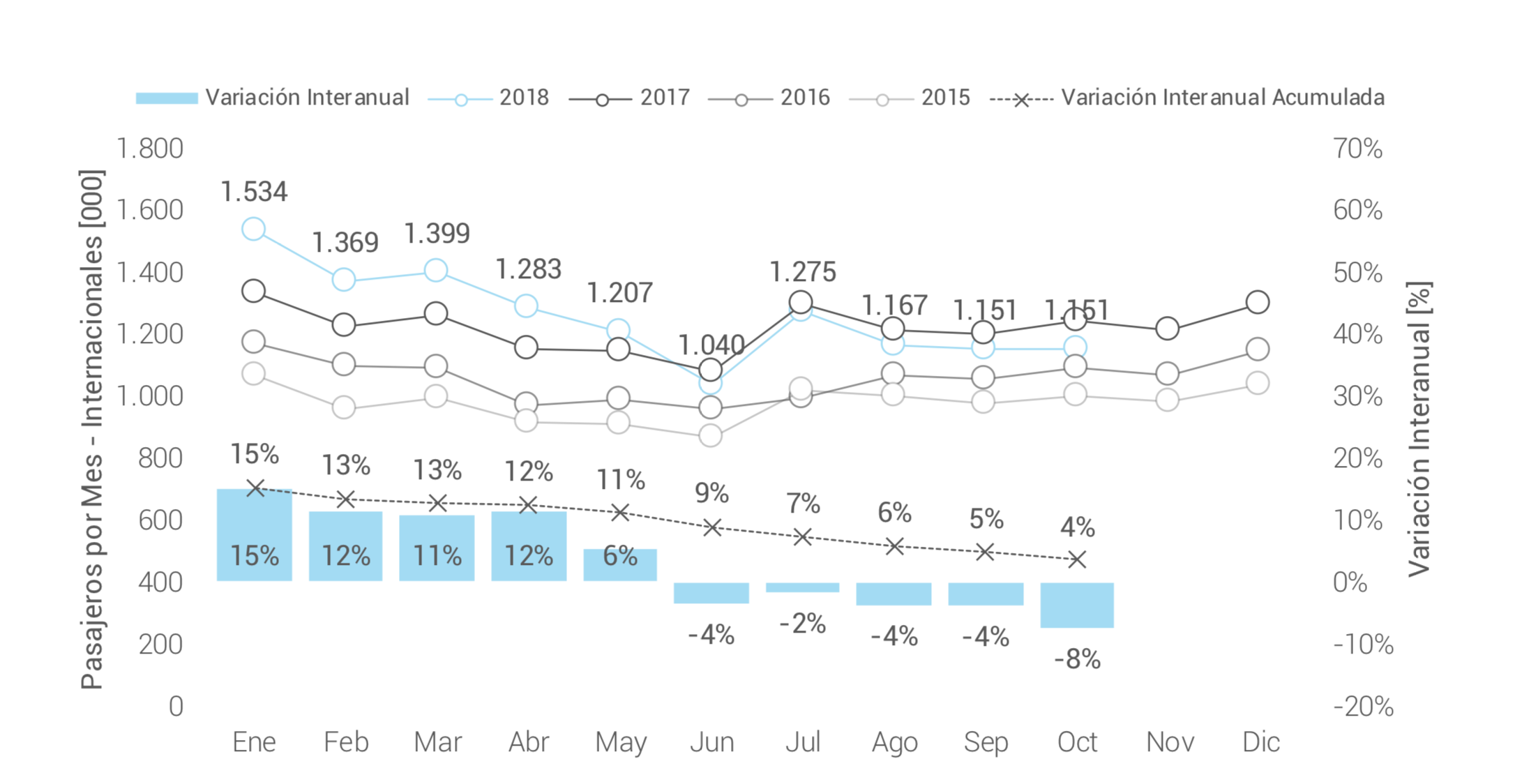 One positive effect of the currency devaluation is that Argentinians are opting to travel domestically; passenger growth in the country’s domestic market reached double digit levels for each month for the 12M ending Oct-2018. 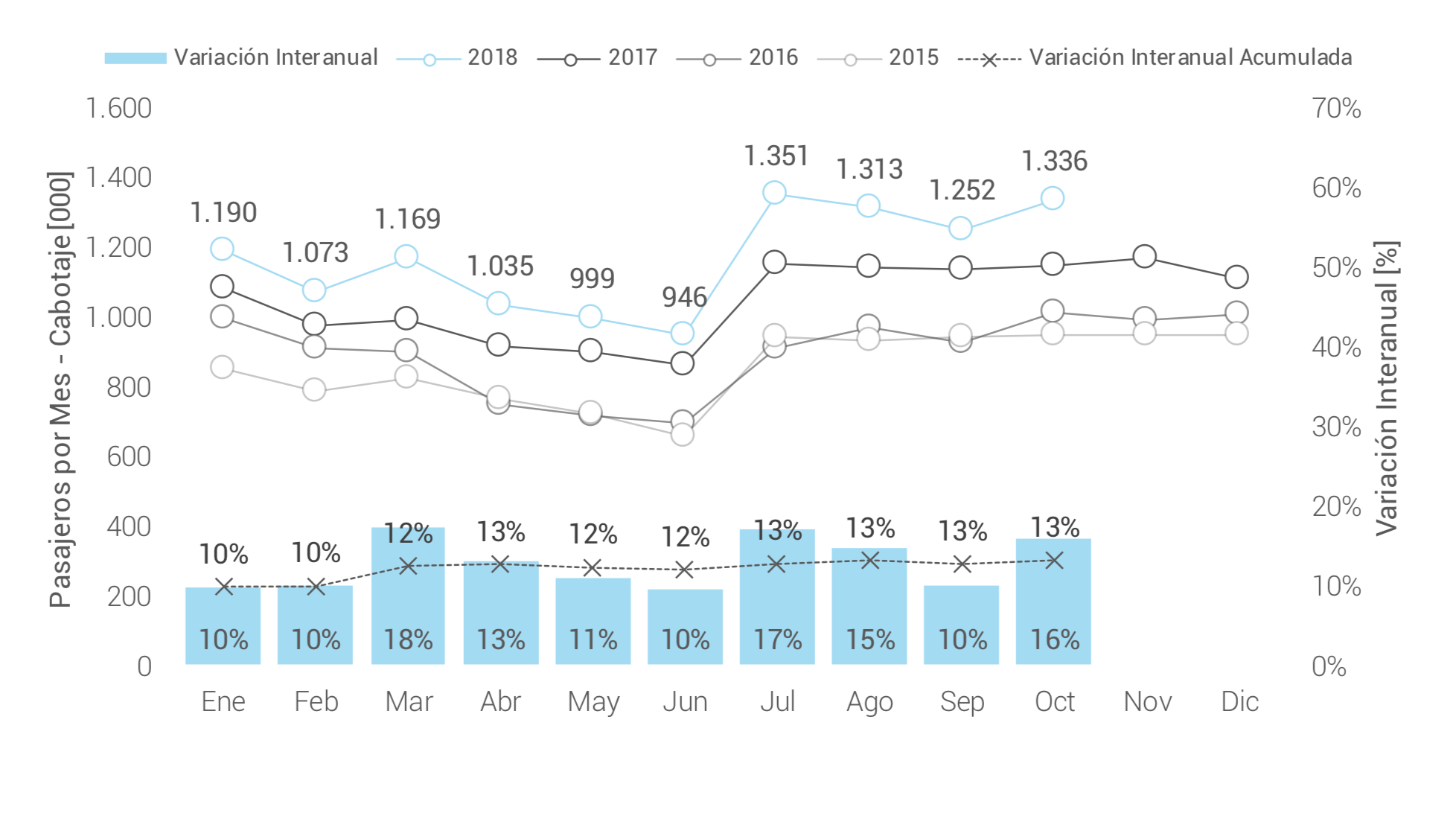 Those domestic passenger levels are encouraging, but Argentina’s economy remains a wildcard. Forecasts show a contraction in 2018 and 2019, and the country is holding a presidential election in late 2019.

Argentina’s aspiring and established airlines also face a familiar challenge – union headaches. Strikes and work stoppages are the norm for Aerolineas Argentinas; there was a recent one-day strike that resulted in an 8% decrease in passengers handled in Nov-2018, and will cost the airline millions.

Unions have also taken aim at Flybondi and Norwegian, accusing the airlines of unfair competition, and the Financial Times has reported that residents living close to Flybondi’s largest base at El Palomar had secured a court injunction limiting flights to three per day. The airline is the only commercial operator at the facility, which is a military base.

Eventually the restrictions were lifted, but not before the airline had endured commercial harm.

Flybondi system top ten hubs/bases/stations by seats, as of mid-Dec-2018 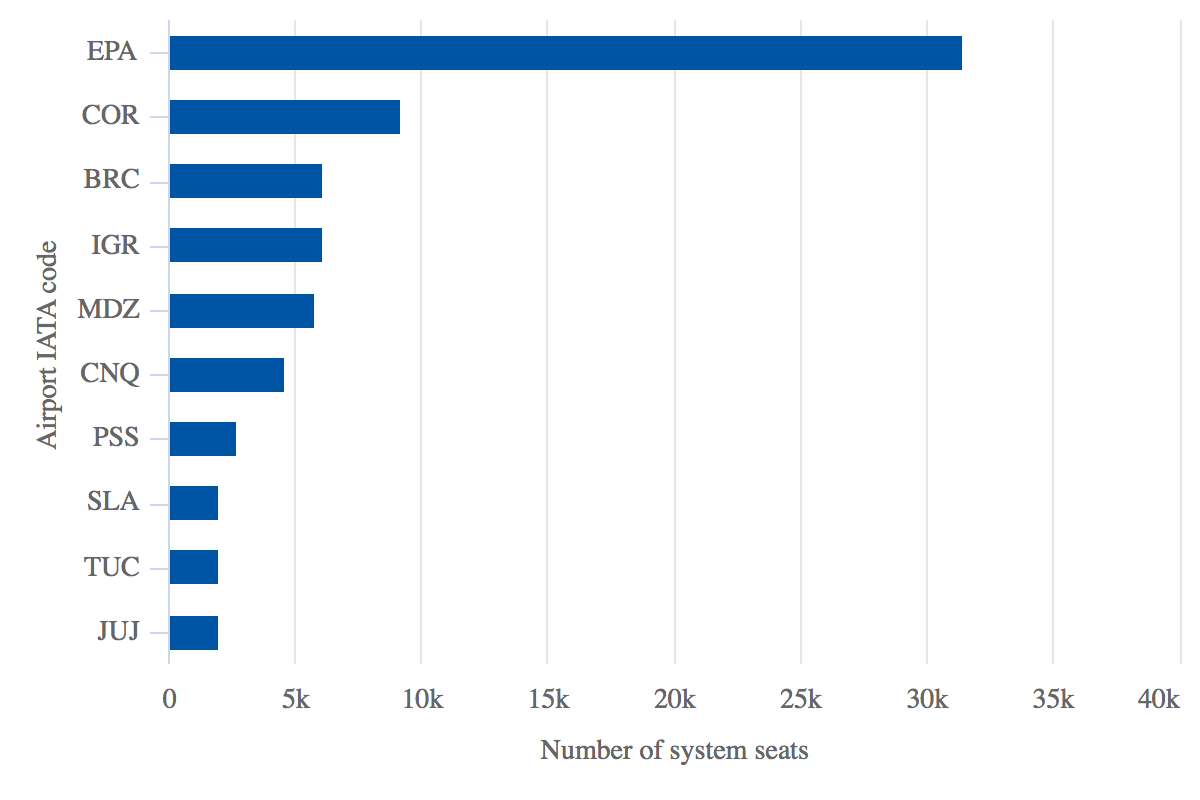 That is just a snapshot of some of the challenges that aspiring airlines in Argentina face.

There are also infrastructure challenges and air traffic constraints. Ground handing can also be expensive, and Flybondi has opted to invest in its own ground handling at some airports where it operates.

Argentina's government is taking some encouraging steps to help foster growth in the aviation industry. Its Minister of Transport has pledged to invest USD803 million in airport infrastructure in 2019.

Despite inherent challenges in Argentina’s market, the country’s new generation of low cost airlines remain undeterred. Norwegian has previously stated its plans to build up a fleet of 70 aircraft in Argentina over a decade, and Flybondi has reportedly stated that the airline is aiming to turn a profit in 2019.

It is a laudable goal, and one that is definitely within reach for the government. But in order for Argentina’s aviation industry to reach its full potential some old union mindsets need to change, and the government needs to continue focusing on ensuring Argentina has the proper infrastructure to meet its passenger growth targets.