Arab Air Carriers show that not all are created equal, but the rest of the world can learn from them

At the CAPA World Aviation Summit in Amsterdam in Nov-2013, one of the recurring themes was the success of Middle East airlines. Abdul Wahab Teffaha, Secretary General of the Arab Air Carriers Organisation (AACO), gave his thoughts on the development of Arab airlines, their success and the lessons to be learned.

Building on their geographical location, supportive government policies and relative political stability, some AACO carriers – notably Emirates, Etihad and Qatar Airways – have developed business models combining cost efficiency, high growth and a premium service. Of course, this formula has not been replicated everywhere in the region and it is a little misleading to talk about Arab carriers as a homogeneous group.

Nevertheless, other participants in the aviation sector, whether operator or government and whether in the Arab world or elsewhere, could learn some useful lessons from the success of the Gulf Three in particular.

AACO passenger traffic has grown in all major regions since 2003

Member airlines of AACO have seen strong growth in passenger numbers in most major markets over the past decade, according to data presented by Abdul Wahab Teffaha to the Summit.

The slowest growth has been to the Americas, which is AACO’s smallest region for international traffic, reflecting its members’ relative geographical disadvantage and perhaps also lower levels of demand. 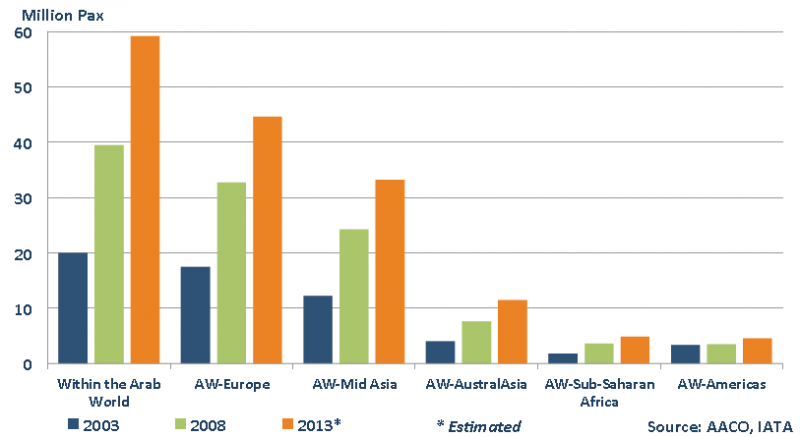 AACO market share has fallen in its biggest regional markets...

Although absolute AACO passenger numbers have increased over the past decade in all major markets, AACO market share has fallen in its three largest markets since 2003 as competition has increased. Nevertheless, market share remains significant in all regions. Moreover, it is likely that, where market share has fallen between the Arab world and other global regions, this reduction is concentrated in parts of the Arab world away from the hubs of the big three Gulf carriers.

Within the Arab world, AACO's share was around 98% in 2003, but this has slipped to around 85% in 2013. This mainly reflects the emergence of new carriers that are not AACO members, particularly LCCs such as flydubai and Jazeera Airways. New Arab carriers and European LCCs have also taken share from AACO members on routes from the Arab world to Europe, where AACO share has fallen below 50%, although it is holding up in the region at 45%.

The biggest fall in AACO market share since 2003 has been on routes to mid Asia, where it has dropped from more than 70% to around 46% in 2013. This mainly reflects the emergence of new Asian LCCs.

...but increased in Australasia, sub-Saharan Africa and the Americas

AACO market share has increased from the Arab world to Australasia, sub-Saharan Africa and the Americas, to exceed 70%, 60% and 50% respectively and on trans-Arab routes. The increased market share in North America in particular has recently led to protectionist calls from some - but not all - US carriers.

Mr Teffaha told CAPA that such calls, which he described as “only an echo of some voices that have been a little bit loud in Europe”, are counterproductive and “belong to the past”. He added that “these voices will be isolated voices and will not be heeded by the regulators who can see the bigger benefit to the consumer, to the economy, to all the stakeholders in the valuation chain of aviation…”. 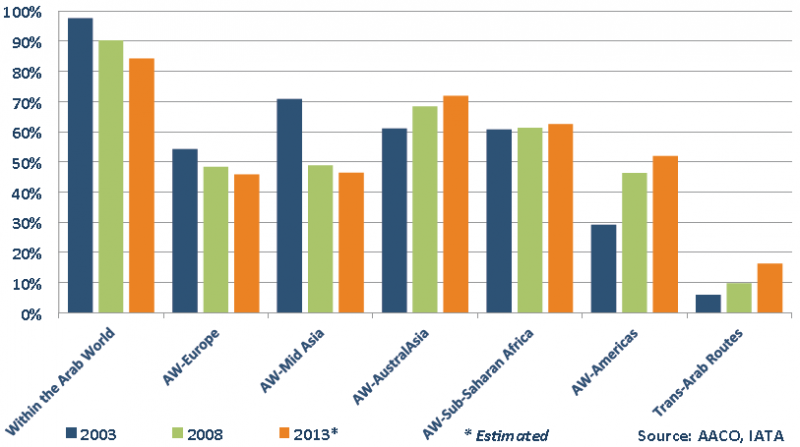 “…not out to conquer the world…”

Mr Teffaha sought to downplay the significance of AACO members on international routes, stating that they were “not out to conquer the world”. He pointed out that his organisation represents less than 4% of international seats in Europe, less than 3% in the USA and less than 7% in Asia. In his view, AACO carriers are “trying to reach out to the global customer who wants a product and routes that are not offered by somebody else”.

What the figures do not show, of course, is the share of traffic between Europe and Asia that is carried by AACO airlines via a connection in the Arab world as a percentage of total traffic between the two regions. It is through such a connecting strategy that the big three Gulf carriers have had a major impact on global air travel, even if they have not quite conquered the world. 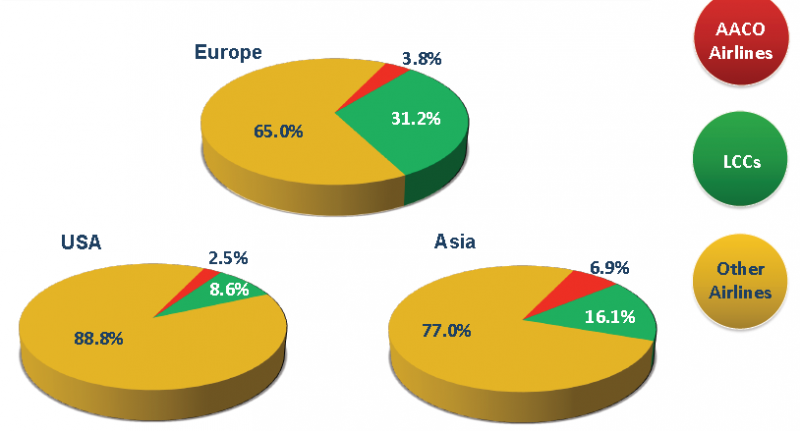 Is this growth consistent with an immature market?

Mr Teffaha argued that the development of the Arab air transport market is consistent with the development of any immature market. To the extent that he is talking about broad brush figures describing growth in air traffic for the region as whole, as demonstrated above, he has a point. However, this disguises what could be termed a two tier structure among Arab airlines.

The UAE and Qatar, for example, are both among the highest penetrated countries by air travel in the world and continue to enjoy double digit growth that is far higher than the global average.

Growth in these two Arab countries is not consistent with the development of an immature market, but reflects the growth strategies pursued by Emirates and Etihad in the UAE and by Qatar Airways. According to OAG data, the Gulf Three control 48% of AACO seat capacity (week of 9-Dec-2013) in spite of the relatively small size of the UAE and Qatar in terms of population.

The growth of these three Gulf carriers reflects their governments’ policies of using aviation as an instrument of economic growth. Immature markets should grow fast, but levels of penetration typically associated with mature markets do not necessarily lead to slow growth if governments and airline executives create the right conditions to foster further growth. 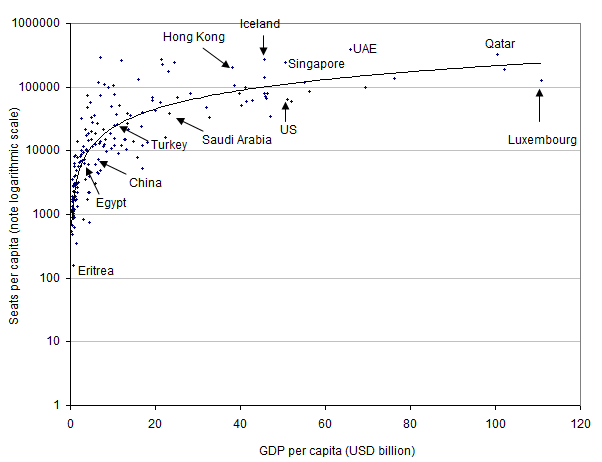 Across the Arab region more broadly, growth is not always consistent, in spite of some very immature aviation markets in some of the larger countries of the region. Geopolitical events can have a destabilising effect on demand for air travel and the region has been susceptible to such events in recent times.

Government influence is visible in Mr Teffaha’s contention that AACO market share development (in particular the reduced share in the three largest regions) is consistent with the evolution of liberalised markets. In particular, differing degrees of liberalisation in Europe and in Southeast Asia have stimulated the growth of LCCs, providing a platform from which newer airlines have taken share from AACO airlines on routes to these regions. To a lesser extent, the Gulf carriers have also benefited from greater access to destinations in Europe, although significant restrictions remain.

In addition, the emergence of new, non-AACO airlines within the Arab world reflects a liberal approach to market access in parts of the Arab world, such as the UAE. The UAE’s openness has also allowed airlines from outside the region to grow their share on routes into the region.

However, liberalisation of market access has further to go across the Arab world and elsewhere. Mr Teffaha told CAPA at the World Aviation Summit that: “Deregulated market access is the first and foremost precondition for boosting any intra-region travel”. Regulatory issues are a priority for his organisation: “…the most important area where a unified voice is relevant is on the aeropolitical side”.

Other than a liberal approach to market access adopted by some governments in the region, Mr Teffaha also points out that the success of Arab airlines owes much to other ways in which their governments have embraced air transport and its positive role in economic development.

A more favourable taxation environment, a proactive and supportive stance towards infrastructure and a more inclusive approach to involving all stake holders in the formulation of long term plans are all examples of this embrace that contrast with the approach taken in many other regions of the world.

Value for money, lower costs, hospitality and a one-stop network

In something of a marketing strap line Mr Teffaha asserted that the “development of capacity in other markets is still far from being the source of anything except consumer delight”. He justifies this by saying that AACO carriers offer value for money, hospitality (or, in other words, a quality service) and a one-stop network that covers most of the world. This certainly seems valid when describing the Gulf Three, although, again it is not universally applicable to all Arab airlines.

One of the facts that is often conveniently lost in criticisms by opponents of the Gulf carriers is that they typically have substantially lower costs of operation than many of their competitors.

Value for money, a crucial element of the Gulf carriers' business model, is rooted in their efficient cost structure, allowing competitive pricing, and also includes a good-to-exceptional standard of service. Mr Teffaha attributed the cost advantage of AACO carriers to their modern fleet, young and inexpensive labour and optimised operations. In addition, low/no taxation (on corporates and individuals) and low (but non-discriminatory) charges for access to infrastructure also contribute to the cost efficiency of carriers such as Emirates.

While AACO data shows that its members, on average, have lower unit cost (CASK) than the global average (and a lower yield), it is worth noting that this advantage is particularly noticeable relative to European and American carriers.

Unit costs for airlines such as Emirates and Etihad, based on their individual published accounts, are broadly on a par with the CASK levels of Asian carriers.

Mr Teffaha’s additional claim that Arab airlines also delight customers by being environmentally friendly is based on the fact that AACO’s average fleet age of just over seven years is much younger than the global average. Against this needs however to be offset the occasions where Gulf carrier one-stops substitute direct service, albeit a relative minority of operations.

However, the on-going and strong growth in passenger numbers is evidence enough that AACO carriers, or at least some of them, are providing something that customers want.

Perhaps the clearest message to be taken from Mr Teffaha’s presentation in Amsterdam is the importance of supportive government policies towards aviation.

In countries with a stable political environment and where government policy in areas such as tax, infrastructure and market access are aviation-friendly, such as the UAE and Qatar, the airline sector can thrive and continue to grow well beyond what would be regarded as maturity in other parts of the world.

By contrast - and this is scarcely rocket science - countries like the UK, which prevaricate about new infrastructure and annually increase passenger taxes, place their economies and airlines at a disadvantage. The fundamental difference is between having a holistic economic strategy or a patchwork of band-aids. One is sustainable, the other a recipe for constant crisis.