Shares in Airports of Thailand (AoT) lost 1.9% yesterday, upon the release of the group’s financial report for the three months ended 31-Dec-2010. AoT increased aeronautical revenue by 18.2% in the quarter, while non-aeronautical revenue jumped 11.7%, to a combined total of USD187.5 million.

Elsewhere, Austria's Vienna Airport gained 0.5% yesterday, as the airport resumed construction on the terminal extension VIE-Skylink as planned. In Dec-2009, a total cost of EUR830 million was announced for the project, which includes provisions for risk and reserves. Operations of the expanded facility are scheduled to commence in 1H2012.

Contract negotiations, which took place during the suspension of construction, have been concluded with the most important trade firms. New companies were selected for project management and local construction oversight. The tender to select a general contractor for the interior construction is currently in progress and expected to be completed by 3Q2010. The decision to award this contract will be based on the economic benefits for Flughafen Wien AG. 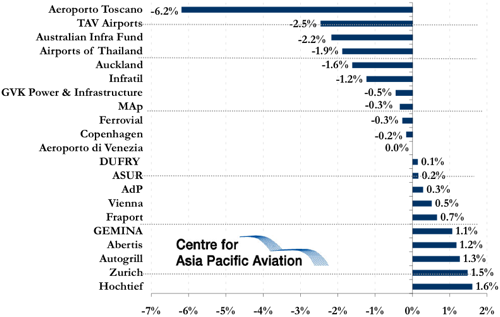