Airports of Thailand (AoT) shares gained 2.7% yesterday, with assurance from the Tourism Authority of Thailand (TAT) and PATA that the protests in Bangkok have not caused major disruption in the city and Bangkok remains a safe destination for both leisure and business travelers.

According to TAT and PATA, both city airports (Don Muang and Suvarnabhumi) are operating as normal, as are all international and domestic airports in the country.

Meanwhile, Thai Airways stated the protests have had no impact on its schedule and it has not experienced a decline in new bookings from the protests. Thai stated bookings have remained at 70-80% of total capacity, while load factor over the past few days has remained at 75-76%. The only exceptions were passengers from China, Hong Kong and Malaysia, where governments had advised its citizens not to travel to Thailand. Bangkok Airways and Thai AirAsia also stated it was business as usual. Thai Airways meanwhile announced its Larn Luang Ticketing Office will remain temporarily closed until the situation in the area returns to normal.

In North Asia, shares in Beijing Capital International Airport dipped 1.7% yesterday, upon the retirement of Executive Director and Chairman from the Board of Directors, Zhang Zhizhong. Mr Zhang confirmed he had no disagreement with the Board, adding that the resignation coincides with his retirement age. The Board subsequently appointed Dong Zhiyi as Chairman of the Board, with effect from 16-Mar-2010 through to the date of the company's 2011 AGM.

For all your strategic airports news updates, sign up to CAPA’s exclusive Airport Business Daily for the latest news affecting traffic and financials and much more. 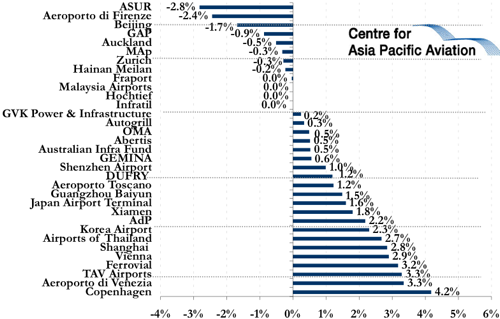