Anchorage airport: an east-west hub growing into cargo and e-commerce

Anchorage Airport, the furthest west of all the U.S.’s major airports other than Honolulu, serves an isolated community that is in the fourth least populous state, with only close to 740,000 residents.

But while a big part of the facility's job is to ensure that the remotest communities there are connected to the state capital, and thereby to the rest of the world, Ted Stevens International Airport has for decades filled an entirely different role on the global stage as an east-west, Americas-Asia, hub; one of its primary functions in the time when aircraft simply could not fly nonstop between origin and destination.

That role has reduced hugely since aircraft began to acquire much longer range, but the airport has remained an essential element of the cargo aircraft network because those planes often have shorter operating range.

Now one of the world’s leading cargo and logistics companies is predicting a growing e-commerce role for Anchorage.

At the last frontier topographically, but not aeronautically

Located at ‘the last frontier’ topographically (the airport concourse is replete with stuffed grizzly bears), but situated in a strategic position aeronautically, Anchorage has long played a key role in air transport long haul strategy – originally for passengers, but more lately for freight.

Anchorage was an air crossroads for the world long before that role was ever envisaged for Dubai, but for different reasons.

The Middle East hub has benefitted from its geographical position at the centre of the world, providing opportunities for Emirates to employ sixth freedom routing options for passengers; for example, Sydney to Dubai to London, using third and fourth freedom traffic rights back-to-back.

In the case of Anchorage, it was a more basic need that drove airlines to route long distance flights via that airport: fuel.

Anchorage Airport, which opened in 1951, established itself as a critical point on flight paths between the Americas and Asia because airliners simply could not fly as far as they can do now without the need to refuel. Anchorage was the west-east fuel station, just as Gander in Newfoundland, and later Keflavik in Iceland, had been for trans Atlantic flights.

Location of Anchorage vs. mainland U.S., Canada and North Asia (the vertical dotted line is the International Date Line) 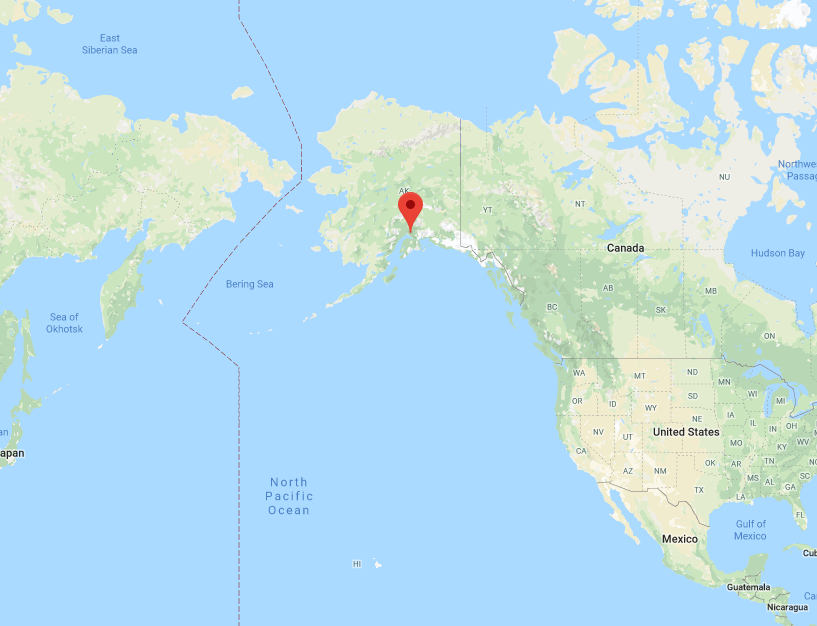 A transit point en route to Asia until 2011, but little demand for O&D traffic

Airlines that used Anchorage to provide those necessities included Northwest Orient (major U.S hubs to Tokyo right up until the early 1970s); SAS (a transpolar service from Copenhagen to Tokyo from 1957); JAL (Tokyo to major European cities from the 1960s until 1987); Air France/BA/Iberia/KLM/Lufthansa/Sabena (Europe-Tokyo into the 1980s).

Also Korean Air, between Seoul and the continental U.S. and Europe in the 1980s. (One of Korean's flights, KAL007 from New York via Anchorage, was infamously shot down close to the Russian coast in 1987, mistaken for a spy plane.)

Those heydays are now in the past.

Nowadays, since the 1990s and the end of the Cold War, commercial airlines routinely cross the Pacific nonstop, although Korean Air continued to use Anchorage into the 2000s and remarkably China Airlines, the last Asian carrier to serve Anchorage on a regular basis, used Anchorage as an intermediate stop on its Taipei-New York route until 2011.

There was, and is, little demand for point-to-point intercontinental services with Anchorage as the origin and destination point.

In the 1990s Alaska Airlines and Aeroflot operated services from Anchorage to several destinations in the Russian Far East. Alaska Airlines pulled out in 1998 due to insufficient demand. The Aeroflot services were primarily intended as technical stops en route to Seattle and San Francisco and were cancelled once newer aircraft and nonstop rights became available.

Occasionally, a new route will emerge. For example, Icelandair launched services from Keflavik in May 2019. In Oct-2018 plans were announced to connect Anchorage and Harbin in China with year-round, nonstop flights as early as summer 2019. That service has not yet begun. 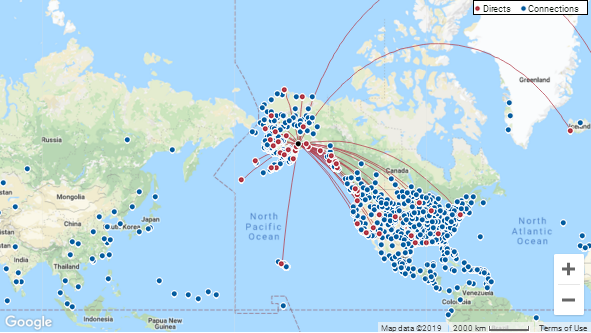 That is as far as it goes for passenger services, with most of the direct ones serving points within Alaska or connecting the state with mainland U.S. and Canada, as the route map above shows.

Anchorage’s passenger status is recognised by its FAA categorisation as a 'medium-hub primary commercial service facility'.

However, Anchorage is mostly recognised today as a major air cargo hub, owing again to its strategic location on the shortest routing between many points in North American and Asia.

This is of particular importance to cargo carriers because of the lower range capabilities of most cargo aircraft. FedEx and UPS are major operators at Anchorage, along with over 30 other international cargo airlines. Anchorage remains an important fuel stop for these airlines to ensure maximum payload capability.

‘Air crossroads of the cargo world’ is a name that still fits.

The charts below indicate the contrasting fortunes of passenger traffic capacity and cargo volume between 2013 and the present day. 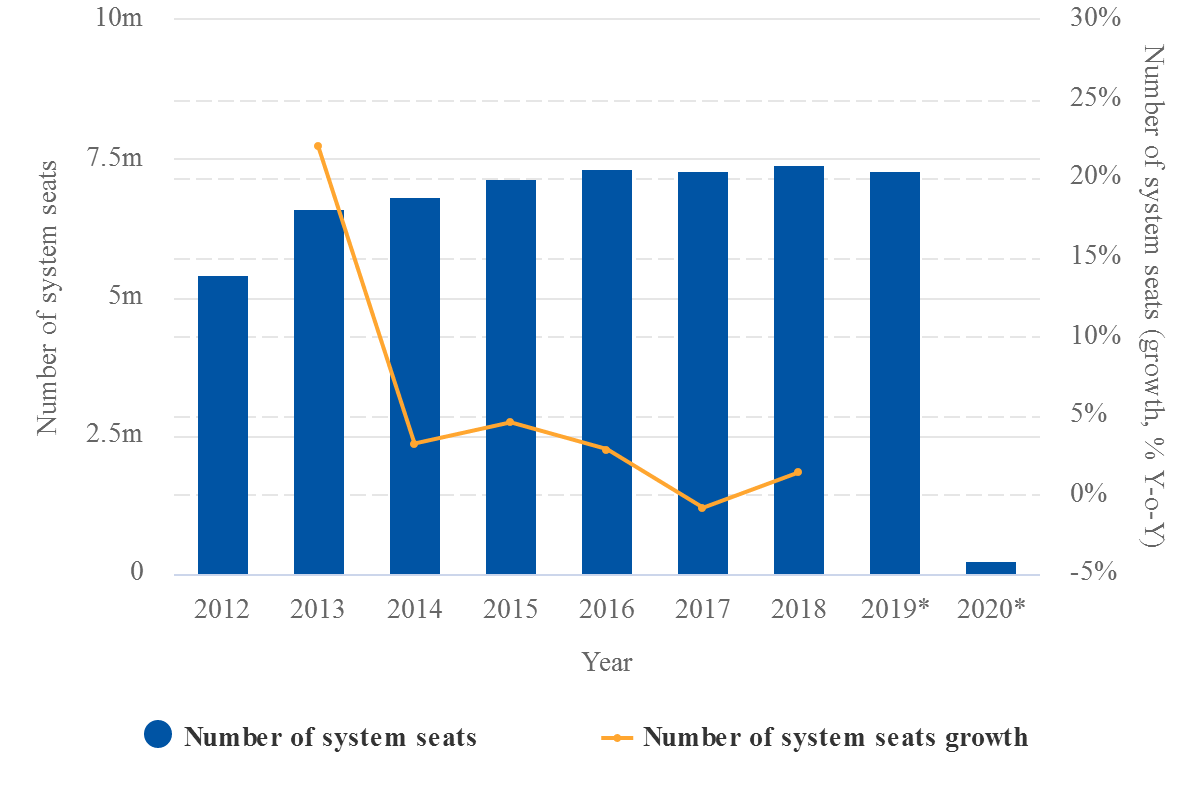 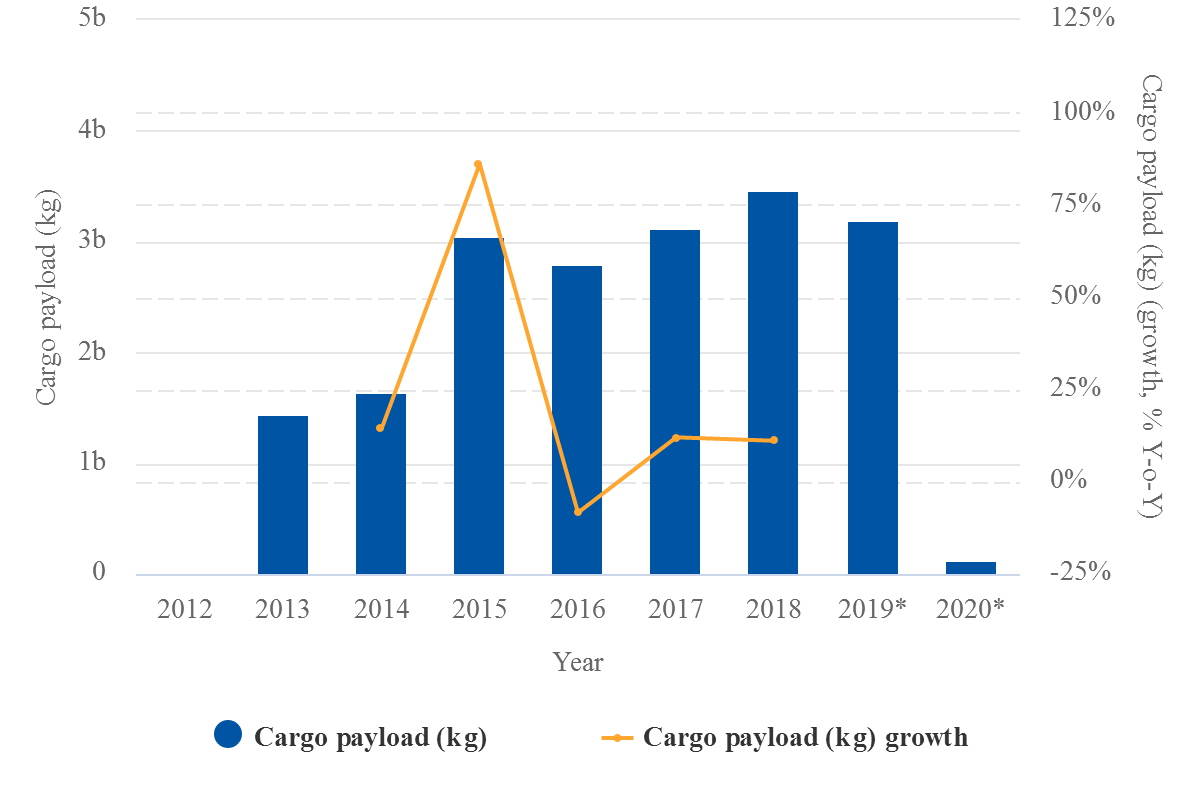 Returning to Panalpina’s forecast, to back its claim that e-commerce will drive the airport’s next round of expansion, it gives the following reasons:

Those infrastructure investments are impressive. They include:

The airport is currently the fifth busiest cargo hub globally, with an annual volume of 2.8 million tons, and grew at the second fastest rate of the top 20 cargo airports in 2018. In the U.S., Anchorage is #2 for landed weight of cargo aircraft, after Memphis.

E-commerce has revitalised many communities around the world, such as west Ireland, close to Shannon Airport. Anchorage’s strategic position between the Americas and North Asia, in particular, might be about to open up a new chapter in its aviation history.