All Nippon Airways and First Eastern Investment Group signed an MoU yesterday to establish the "first Japanese low-cost airline". The new airline will operate international and domestic short-haul routes out of Kansai International Airport and will operate independently from ANA.

The new company will be established in 2H2010 with Japanese investors holding a 66.7% stake of which ANA will hold 39% and First Eastern will hold the remaining 33.3%, the maximum foreign ownership level allowed for an airline in Japan. The new company’s air transport operations are expected to commence in 2H2011.

Also in the Japanese market, shares in Skymark Airlines gained 3.8% yesterday, but has dropped as much as 11% in intraday trading in Tokyo today, the most in eight months, following the ANA LCC announcement.

Elsewhere, shares in Virgin Blue slipped 3.4% yesterday and have slumped 8.2% in early morning trading, as the Australian Competition and Consumer Commission (ACCC) today issued a draft determination proposing to deny authorisation for an alliance between Virgin Blue and Air New Zealand on services between Australia and New Zealand.

ACCC Chairman, Graeme Samuel, stated the commission is concerned the alliance would reduce competition on the trans-Tasman services and increase the likelihood of coordinated conduct on the trans-Tasman, taking into account the resulting increase in concentration and removal of the constraint posed by Pacific Blue.

The ruling is Brisbane-based Virgin Blue’s second rejected airline collaboration in as many days after the US Transportation Department yesterday blocked a proposed tie-up across the Pacific Ocean with Delta Air Lines.

ECM Libra Investment Researched upwardly revised AirAsia’s target price to MYR2.32, due to the strength of the carrier’s second quarter financial results and maintained its "buy" call on the carrier’s stock. The research house expects an improved second half for the LCC, aided by higher traffic in conjunction with the festive season. Shares in the carrier remained unchanged yesterday.

In other AirAsia Group news, AirAsia X CEO, Azran Osman-Rani, stated the carrier had no plans to launch Paris services this year, following reports the LCC had been awarded a landing slot at Paris Orly Airport to operate twice weekly Kuala Lumpur-Paris service. Reports stated that although the carrier had been awarded the slot, it intends to launch the service in 2011 and was hoping to operate the route four times weekly.

Meanwhile, unlisted Philippine airline, Cebu Pacific, announced plans to list shares on the stock exchange on 25-Oct-2010. The carrier is planning to launch an IPO to raise up to USD728.5 million. 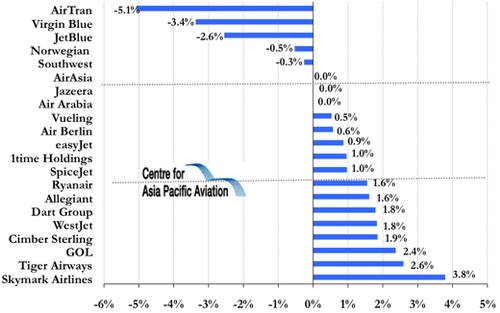