All Nippon Airways (ANA) reported a narrowed net loss and an operating profit in the three months ended Jun-2010 (1QFY2010), as it benefited from an uptick in international business and tourism travel.

ANA Executive VP Finance, Tomohiro Hidema, commented: “ANA was successful in capturing business and leisure traffic demand, which has gradually recovered on both domestic and international routes, thus operating revenue exceeding results for the same period in the previous year. We have also worked to hold down costs, matching supply and demand, and reign in operating costs, as well as reducing sales and labour expenses.” 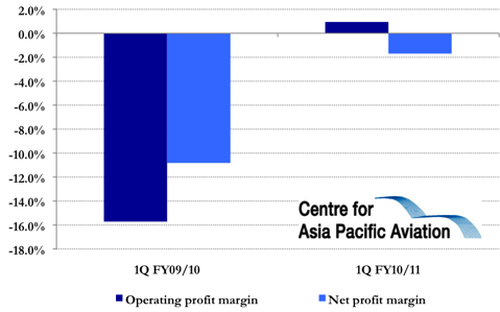 As a result, domestic passenger numbers for the three month period increased 6% in the quarter, to 9.6 million, despite a 4.9% capacity (ASKs) reduction), resulting in a 6.2 ppt load factor improvement to 61.7%. ANA has also worked to strengthen competitiveness by enhancing services for its ANA Mileage Club members, including the start of its ANA Card Family Miles program, and introduction of a new ANA Mileage Club mobile membership. 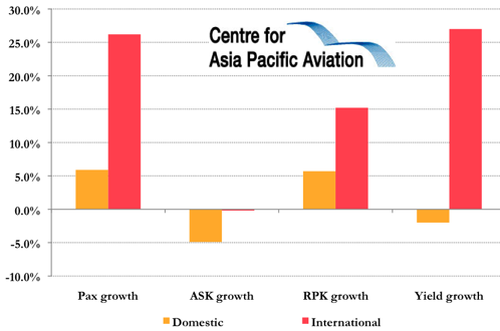 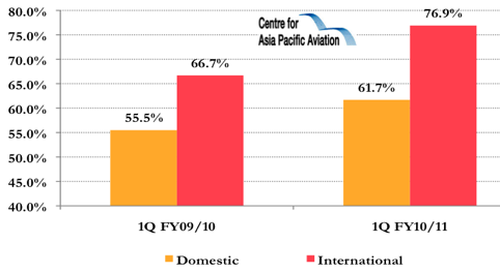 Despite the temporary impact of the volcanic eruption in Iceland and riots by demonstrators in Thailand, the carrier stated it has witnessed a “marked recovery” in international demand, led by increased business demand. ANA added that by flexibly expanding supply on routes where demand was forecasted, it achieved significantly higher international passenger numbers in the period, with passenger numbers increasing 26% in the period to 1.2 million, despite a 0.2% capacity (ASKs) reduction. (The improved international figures follows on from a difficult period in 2009 stemming from the swine flu influenza).

Other initiatives such as introduction of new “Inspiration of Japan” products and services, and implementation of promotional campaign to encourage Chinese leisure traveler to Japan, all contributed to ANA’s competitiveness in the market.

The new runway will enable the carrier to operate late-night/early-morning services to Europe, the US and Southeast Asia. At present, international operations at the airport are limited to charter flights to East Asia, with ANA and Japan Airlines operating charter services to Seoul, Hong Kong, Shanghai and Beijing. The carrier, from Sep-2010, will operate to nine international destinations from Tokyo Haneda.

ANA President and CEO, Shinichiro Ito, commented: “We have long been waiting to operate international scheduled flights from Haneda Airport and we are extremely pleased with the news....Customers will find international flights to and from Haneda increasingly convenient, as this airport is easy to access from downtown Tokyo and offers fast connections to Haneda’s domestic network. These new services, combined with our existing flights to and from Narita Airport”.

ANA submits antitrust application for cooperation with United and Continental

Also in Jun-2010, ANA applied – with Star Alliance partners United Airlines and Continental Airlines – for antitrust immunity on Japan-USA routes with the Ministry of Land, Infrastructure, Transport and Tourism (MLIT) of Japan. The carriers filed the request under an open skies agreement reached in Dec-2009 between Japan and the US. In Dec-2009, the three carriers filed a request for antitrust immunity with the US Department of Transportation for enhanced cooperation between North America and Asia.

ANA added that with reduced freight capacity (due to downsizing of aircraft) and the effects of “sluggish” demand for perishable cargo and home delivery parcel services, domestic cargo volumes declined 5.1% to 103,000 tons in the three month period.

However international cargo volumes rose 52.3% with growth in Chinese domestic market demand driven by the implementation of economic stimulus measures, as well as rise in shipment demand of plasma display and semiconductor related materials in Taipei and Seoul. Transport saw positive growth, primarily on Asian routes, and volumes in the period increased significantly versus last year.

As a result, revenue from international cargo routes was higher compared to the previous year (up 94.5% to USD230.9 million), while domestic cargo revenue declined 1.0% (to USD86.6 million).

In fleet news, Boeing CEO, Jim McNerney, last month stated it is confident the first B787 will be delivered before the end of 2010 deadline, although Boeing issued caution to ANA, its launch customer, that delivery could be delayed until the first weeks of 2011.

Meanwhile, ANA and Honeywell signed a ten-year integrated service agreement for support of ANA’s 50 B787 aircraft, due for delivery by 2016. Honeywell will provide access to spares, logistics and repair services for its equipment installed on the aircraft. ANA is expected to receive its first B787 in Dec-2010 or Jan-2011.

The carrier, in Jun-2010, also confirmed plans to acquire 15 Mitsubishi Aircraft Corp MRJ 90 regional jets (priced at USD760 million according to the catalogue period), for delivery between FY2013 and FY2017. The order fits in with the carrier’s fleet strategy, under which Japan’s second largest carrier aims s to procure a 90-100-seat aircraft as a successor to existing small aircraft as well as to enhance profitability and respond to envisaged changes in airport environments. ANA, which will become the first airline to introduce the MRJ90, stated it would operate the aircraft on domestic routes linking major regional cities.

ANA may take a stake of between 30% and 50% in the new company, with overseas airlines and investment funds owning slightly less than 30%, according to reports. The carrier will also preportedly seek investment from Japanese travel agencies and hotels to offer wider services.

The LCC is in response to growing competition from Chinese and Southeast Asian LCCs, which now operate to Japan as aviation access arrangements are progressively liberalised. The LCC reportedly will offer airfares at less than half the price of major carriers for international routes within six hours of Japan, according to reports. It has previously been reported that domestic fares would be priced at less than JPY10,000 (USD110) per sector.

The carrier will reportedly not operate under the ANA brand, and its salary system would be different from the existing ANA system, as part of efforts to reduce the carrier’s cost base.  It has been previously reported that the carrier is planning to employ foreign pilots flight attendants and offer simplified inflight services, as part of efforts to maintain a lower cost base than its parent. Japan has always been a difficult market for LCCs due to higher labour costs, limited slot availability at key airports and expensive landing fees.

ANA President, Shinichiro Ito, in Apr-2010 stated the carrier was "seriously considering" the possibility of starting an LCC, but added that it needed to find airports that were open 24 hours per day with reduced landing fees. In early Jul-2010, ANA reportedly commenced talks with Kansai International Airport Co regarding the launch of a Kansai-based LCC. The airport is considering plans to construct a LCCT.

All Nippon Airways (ANA) in late Jun-2010, stated three of its consolidated subsidiaries, Air Nippon Network, Air Next and Air Central will merge, as part of efforts to streamline their operations and to "respond more flexibly to a changing airline industry" and to "help the ANA Group as a whole build a more adaptive operating structure". The merger is scheduled for 01-Oct-2010.

Under the plan, Air Next and Air Central brands will be dissolved, with only Air Nippon Network remaining. The carrier added that plans also call for Air Nippon Network to change its name to ANA Wings Co Ltd at the time of the merger.

Overview of merger companies (data as at Mar-2010) 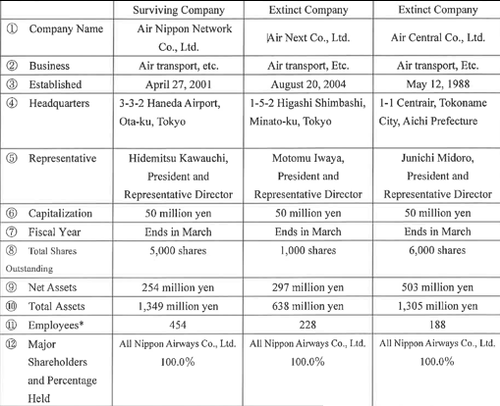 All Nippon Airways, in mid-Jul-2010, also announced that four of its consolidated subsidiaries – ANA Sales Co (ASX), ANA Sales Hokkaido Co (ASH), ANA Sales Kyushu Co (ASK) and ANA Sales Okinawa Co (ASO) – will merge. The move is part of the ANA Group's FY2010-2011 corporate strategy under which the carrier will reorganise its sales structure while consolidating functions and streamlining systems. The merger is scheduled to be completed by 01-Oct-2010.

Expecting return to profitability in FY2010

The carrier added that it expects its cost reduction efforts and the opening of a new runway at Tokyo Haneda to benefit the carrier, commenting: “ANA will continue to expand its international business. We will also ensure that its planned income recovery and cost reduction plan is implemented, and build a strong cost structure capable of withstanding fluctuation risks”.

However, Mr Hidema, warned: “While the Japanese economy showed steady recovery during the three month period under review, deflationary effects continued to exert downward pressure, and taking an optimistic view remains difficult. Concerns about a downward economic swing, primarily in Europe, along with moves by our competitors, mean that business conditions going forward will remain uncertain”. The carrier added: “Downward economic swings primarily in Europe and increasingly competitive markets both inside and outside Japan make business conditions uncertain; therefore there will be no change to the consolidated forecast."