All Nippon Airways' (ANA) shares gained 3.5% to JPY297 yesterday, as JPMorgan Chase & Co raised its rating on the stock from “underweight” to “neutral”.

Qantas higher on B787 plan

Qantas’ shares gained 0.9% as the airline revealed plans to take delivery of its first batch of B787 aircraft two years earlier than planned, with Jetstar to take the first eight B787s for use on international routes.

See related report: Qantas’ B787 orders juggled again as it prepares for domestic war. Jetstar to take 787-8s from 2012

Asiana Airlines’ shares fell 2.1% yesterday as it revealed a remarkable turnaround at the operating level from a loss of KRW129.5 billion in 2Q2009 to a profit of KRW177.5 billion in 2Q2010, thanks to a 46% surge in revenue to KRW1.24 trillion as demand for air travel to/from South Korea soared back to life. 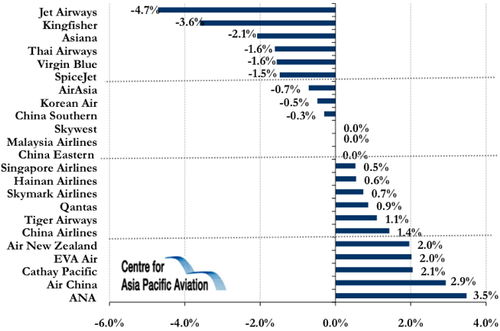