ANA first 1H loss expected; SIA and Air Arabia believe it is too early to pronounce a recovery

All Nippon Airways’ shares were up 0.8% yesterday, despite reports in the Nikkei Business Daily that the carrier is expected to report an operating loss of approximately JPY25 billion (USD276 million) for the six months to Sep-2009, reversing a profit of JPY49.8 billion (USD549 million) in the previous corresponding period, due to weak demand.

It would be ANA’s first operating loss for the first half of a financial year since the carrier commenced publishing interim group earnings in 2000.

Singapore sees demand stabilising, but “not enough evidence yet to conclude that we are back on a firm trail to recovery”

Singapore Airlines’ (SIA) shares were down 1.7% yesterday, on the same day that CEO, Chew Choon Seng, at a Star Alliance press conference in New York, stated, “there is not enough evidence yet to conclude that we are back on a firm trail to recovery”.

However, he stated that it appears that the “bottom has been reached” and demand has “stabilised and even started to grow from September.” Mr Chew added that it would only be possible to state whether traffic is recovering after nine months of sustained improvement, but demand appears to have stabilised.

Air Arabia’s shares were down 0.9% yesterday, as the carrier forecast that 3Q2009 financial results will be “satisfactory”, with improvement to commence from 1Q2010. CEO, Adel Ali, added that he hopes an increase in passenger traffic will “drive the yields up”.

He added, “I think times are going to be tough in [the remainder of] 2009, but we’re seeing a trend of at least more people travelling, which hopefully will drive the yields up. It’s too early to say that the problems are behind us, but there is certainly at the moment light at the end of the tunnel”.

Also in the Chinese market, Air China Chairman, Kong Dong, expressed optimism about the carrier's future prospects, stating he has “full confidence that we can turn over an exam paper with quite satisfactory scores to our stakeholders, thanks to China's economic resurgence and air traffic rebound". He added that the carrier’s Oct-2009 business was “good”, with the carrier stating that Nov-2009 will see “surging turnover as international travellers prepare for Christmas”.

However, while he stated that 2009 is going to be a “better-than-expected year to celebrate”, he conceded that the carrier is “lagging the world’s top carriers” despite reporting net profitability in 3Q2009.

SpiceJet’s shares gained 4% yesterday, while Kingfisher’s shares were down 0.1%, upon the release of the carriers’ 2QFY2010 financial results. Meanwhile, Jet Airways’ shares gained 8.8% yesterday, after slumping the most in more than four months on Wednesday (-9.1%), upon the release of the carrier’s 2Q2010 financial results. See related report: INDIA AIRLINE EARNINGS WRAP: Kingfisher and SpiceJet report losses; Jet Airways losses widen 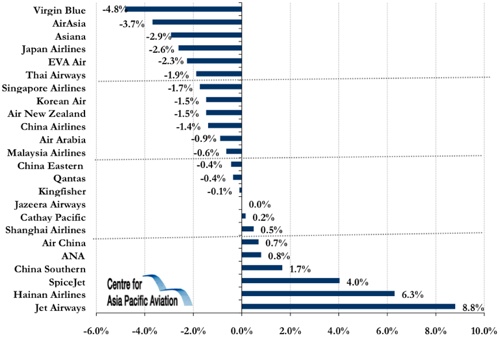