All Nippon Airways (ANA) shares jumped 4.1% yesterday to JPY303 buoyed by the prospect of increased passenger traffic on domestic routes in 4Q2010 while rival Japan Airlines' route-cutting is expected to accelerate during the period. The carrier is also set to benefit from the opening of the fourth runway and new international terminal at Tokyo Haneda this week while Boeing confirmed the B787 programme is on track for the first delivery to ANA in early 2011.

Also in North Asia, Asiana shares remained neutral as the carrier reported a return to profitability in the three months ended 30-Sep-2010 with an operating profit of USD214 million compared with a loss of USD26 million in the previous corresponding period and a profit before tax of USD181 million compared with a profit of USD804,750 in p-c-p. The improved result occurred as revenues increased 34% to USD1,231 outpacing a 7.8% increase in costs to USD1,017 million with international passenger yields gaining 27% in the period to USD 10.2 cents and cargo yields increasing 21.3% to USD 32.9 cents. 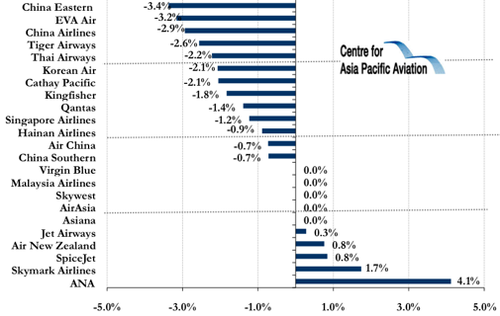