Wall Street closed mixed on Friday (24-Jul-09), with the Dow up just 0.26%, but some US airline stocks took off, as investors see more room for airlines to move in debt markets in coming months. US Airways (21.3%) led the market, following positive 2Q2009 results last week, while United Airlines (10.2%) and Continental (9.1%) were also substantially higher.

American Airlines' shares surged 8.6% as reports surfaced that it is looking to sell up to USD344.1 million in debt to raise capital before the traditionally slow Winter season. The carrier plans to back the secured notes, due Aug-2016, with 15 of its aircraft: ten B737-800s, three B767-300ERs and two B777-200s, worth approximately USD529.3 million. If successful, the offering would be the carrier’s second in less than a month, after issuing USD520.1 million in debt on 29-Jun-09, again backed by aircraft, while American also made an agreement with lenders in Jun-2009 to ease the terms of its USD435 million loan.

Meanwhile, Air Canada's B shares were flat, following the approval of a moratorium on pension funding obligations (see below). 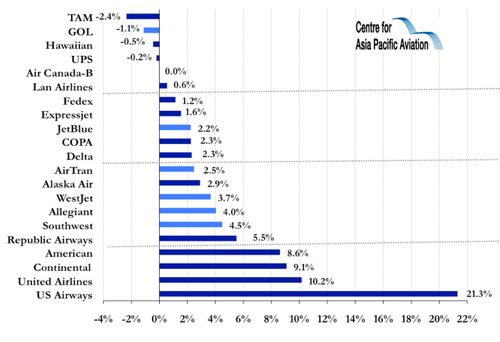 Air Canada announced a regulation has been approved, amending Air Canada's pension funding obligations to allow for a moratorium on past service contributions for a 21-month period and fixed payments thereafter for the 2011-2013 period. The news follows the ratification of pension funding agreements by all five of Air Canada's Canadian-based unions and the successful conclusion of a consultation process with its retirees, managers and administrative, technical and support employees (AT&S) for these same pension funding arrangements.

The agreements remain subject to Air Canada entering into agreements to raise a minimum of CAD600 million in new financing. Air Canada President and CEO, Calin Rovinescu, stated the carrier’s next challenge would be to secure new financing to meet liquidity requirements over the medium term.