North and South American airline shares continued to fall on Monday (30-Aug-2010) after news personal incomes rose less than expected in the US in Jul-2010, again questioning the strength of the economic recovery. The Dow (-1.4%) fell as a result.

American Airlines (+2.2%) made the biggest gain of the day, on speculation Emirates was looking to acquire a stake in American parent, AMR Corp. However, Emirates President, Tim Clark, responded later in trading stating: “We certainly wouldn’t be doing that. Us buying a stake in AMR? It wouldn’t make sense”. He continued: “You’ve got to be careful of market speculation but it’s flattering that people are talking about us."

United and Continental continue to rise

United Airlines (+1.3%) and Continental Airlines (+0.4%) continued to rise following news the US Department of Justice has cleared the carriers’ plans to merge.

In a note during trading, Stifel Nicolaus analyst, Hunter Keay, stated United is a “compelling investment opportunity” and is trading at an “inexplicably significant discount”. Mr Keay also commented that management’s estimates that the combined carrier will lead to annual synergies of USD1 billion-1.2 billion is likely to be “conservative”.

According to Benzinga, United Airlines has risen more than 220% over the last 52 weeks. The carrier ended trading at USD20.71.

Jazz and Air Canada up with TSX 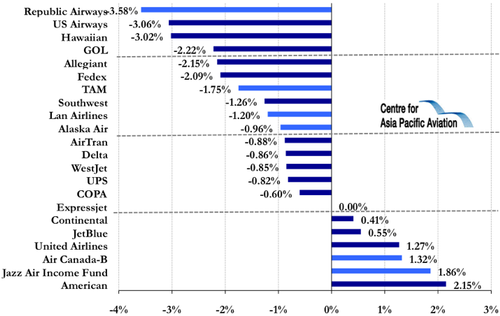