The majority of North and South American carriers’ shares were up on Monday (22-Mar-2010), rising with the wider market. The Dow (+0.4%) was up, after the US House of Representatives approved President Obama’s health care bill.

Airline shares were boosted by a forecast by AirlineFinancials.com founder, Bob Herbst, that US airline financial results should be reasonable this year if crude oil prices remain at or below USD85 per barrel. Herbst stated data indicated that the nine largest carriers in the US will post USD2.7 billion in profits on USD120 billion in operating revenue, just USD6 billion shy of 2008 operating revenues.

American Airlines (+0.8%) was up only slightly, despite stating during trading it expects consolidated unit revenue to increase between 6.8% and 7.8% for the three months ending 31-Mar-2010. AMR Corp also expects to report a cash and short-term investment balance of USD4.9 billion, including USD460 million in restricted cash and short-term investments, at the end of 1Q2010.

Delta and US Airways to provide AirTran, Spirit, JetBlue and WestJet with slots

Delta Air Lines (+4.0%) and US Airways (+2.4%) announced an agreement to transfer to AirTran (+1.4%), Spirit Airlines, JetBlue (+2.8%) and WestJet (+0.8%) 12% of the takeoff and landing slots involved in a previously announced transaction between the carriers at New York's LaGuardia and Washington's Reagan National airports. Under Delta and US Airways' original proposal, US Airways would transfer 125 operating slot pairs to Delta at LaGuardia and Delta would transfer 42 operating slot pairs to US Airways at Reagan National.

America Airline Daily is your one-stop shop for news, data and analysis from the dynamic North American, Caribbean and Latin American aviation markets. Other stories in today’s issue include: 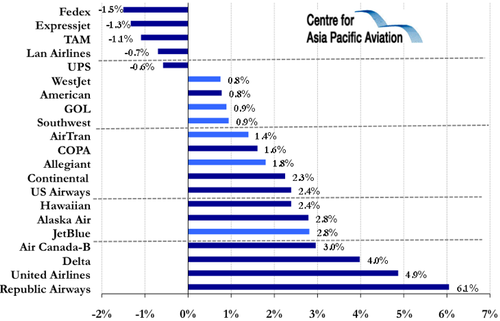