North and South American carriers’ stocks were mixed on Monday (14-Jun-2010) as the Dow (-0.2%) slipped late in trading. The US market had been performing well for the day, but fell in the afternoon on news Moody's Rating Agency downgraded Greece’s sovereign rating from 'A3' to 'BA1'.

The AMEX Airline Index (+0.2%) was up marginally at the end of trading as a result, with a 0.8% decline in oil prices, to USD74.90, softening the blow of the falling Dow.

Deutsche Bank initiated coverage of the US airline industry on sector during trading, stating the stocks have benefited “disproportionately from an improving economy due to their significant operating leverage”.

American Airlines and JetBlue benefited most from the ratings. Merill Lynch also upgraded their rating of JetBlue from ‘Neutral’ to ‘Buy’ over the day, stating the carrier will benefit from the construction of a new runway at New York JFK Airport and previous headwinds from its new reservation system. The group also believes schedule strength at JFK will lead to continued improvement of its business mix, while its increasing market share in Boston will also enhance its high yield mix. Merill Lynch raised the carrier’s price target from USD6.50 to USD11, while Deutsche Bank gave the carrier a price target of USD8.

Alaska Air (+0.8%) made a marginal gain for the day. With the announcement during trading that Horizon Air President and CEO Jeff Pinneo is retiring, Alaska CFO Glenn Johnson was elected to succeed Pinneo as the sixth president of the Alaska Air Group subsidiary. Pinneo was at the helm eight years and has 28 years seniority with either Alaska or Horizon.

The announcement comes as Horizon is resolving its pilots contract, while the same union began protests on behalf of mechanics. Horizon announced last week it has reached an agreement in principle with the International Brotherhood of Teamsters which represents the airline’s 686 pilots. In the coming weeks, Horizon and the IBT will focus on completing the language for the agreed-upon items. The intent is to reach a tentative agreement that the IBT would present to Horizon pilots for ratification. Horizon's pilot contract became amendable in September 2006. After years of negotiations, in January 2010 both Horizon and the IBT requested federal mediation to work through the remaining open items.

While it may have settled the pilots’ issues, the teamsters protested Horizon’s move to outsource 100 maintenance jobs out of Portland, OR, to out-of-state subcontractor. The union noted the 11% unemployment rate in the city.

In addition to being the CFO, Johnson was executive vice president of finance and he is succeeded by Brandon Peterson who was elected CFO for Alaska Air Group. Johnson has announced his intent to launch a comprehensive review of Horizon's market position, and fleet and financial performance. To his new role as Horizon's president, Johnson brings more than 28 years of experience at Alaska Air Group, including oversight of customer services, finance, strategy, project management, maintenance and engineering, information technology, and corporate real estate.

Pinneo will remain at Horizon Air for several months to aid in the transition. During his term as Horizon's president and CEO, Pinneo successfully steered the airline through some of the industry's most challenging years. Elected Horizon's leader only a few months after Sept. 11, Pinneo oversaw substantial improvements in the carrier's operational performance and customer satisfaction in the following years. This culminated in Air Transport World magazine honoring Horizon as "Regional Airline of the Year" in 2007 and Forbes.com ranking Horizon among the top five airlines worldwide in on-time performance in 2009.

"Throughout his long career at Horizon and Alaska, Jeff has left an indelible mark on our customer offerings, marketing programs and, most of all, our people," said Bill Ayer, chairman and CEO of Alaska Air Group. "Jeff's big heart and relentless focus on delivering the highest-quality service to customers are reflected throughout Horizon's operations. Employees at both carriers have benefited greatly from his leadership and ideas."

Ayer said Johnson’s tenure in finance gives him the right perspective to “position Horizon for new opportunities and long-term success.”

Pedersen, a certified public accountant, joined Alaska Air Group in 2003, after a successful career in public accounting. In 2006, he was elected the company's vice president of finance and controller, with responsibility for accounting, payroll, tax, financial reporting and investor relations. In his new role as Alaska Air Group's chief financial officer, he adds oversight of information technology, treasury, procurement and project management. 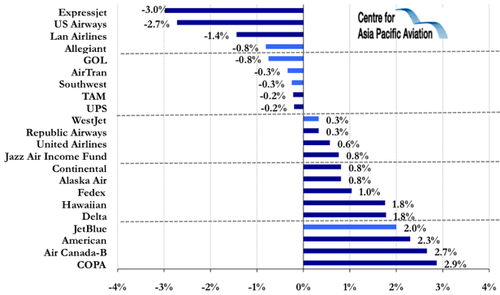