American Airlines and Continental up; as Air Canada falls back to reality

Shares of American carriers were mixed on 31-Jul-09, as the Dow rose a modest 0.2% but oil prices rose 3.8%, to USD69.45. However, despite these increases, the “path to recovery” for the US economy remains long haul, according the Conference Board, after estimating the US economy contracted -1% in 2Q2009, compared to 1Q2009.

Both American and Continental received reviewed ratings from Fitch Ratings late on 31-Jul-09, which may effect their trading on 03-Aug-09. Fitch affirmed American Airlines’ rating as “CCC”, citing intense pressure on premium travel demand and extensive fare discounting, which are driving down passenger revenues.

Meanwhile, Fitch affirmed Continental as “B’-”, with a stable outlook, due to the carrier’s strong unrestricted cash position, which the ratings agency believes will continue to provide the carrier with more flexibility than its rivals during a period of extreme operating stress.

Southwest (+1.6%) stocks rose following the announcement of plans to bid for Frontier Airlines, which CreditSights saw as a “great move” strategically.

Meanwhile, a little reality crept back into the pricing of Air Canada-B's (-6.5%) stock. Despite the loans negotiated with the government and its owners/associates, Air Canada has a long way to go before it is out of the woods. And, with the cheapest of the new external debt costing 12.5% and everything now hocked or hived off, this is very much the last throw of the dice for Air Canada, even with the protectionist international approach now being pursued by the government. 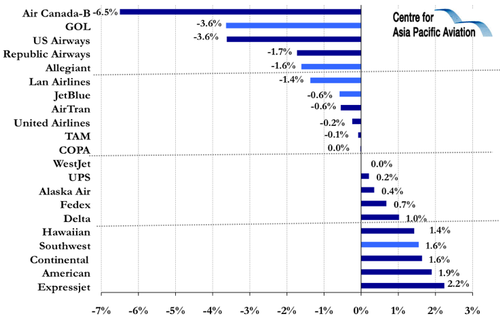