American Airlines (-4.4%), UPS (-4.6%), FedEx (-4.0%) and GOL (-5.4%) stocks were the main victims of a sudden overall loss of faith on Wall Street yesterday, as the Dow slipped 1.5%. The parcel service companies lost ground as shipment volumes continue to slip. UPS announced it was to lay off another 80 mechanics, in addition to the 60 already announced in 1Q09.

After a strong start to the week, GOL has lost approximately 15% of market cap over the past three days.

Meanwhile, Alaska Airlines (+2.5%) was the only airline to see significant upside on the day. 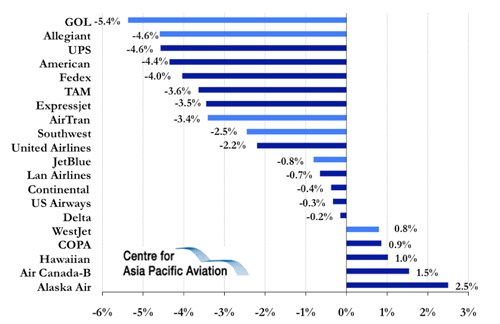 And there was bad news for FedEx. The House of Representatives passed a bill which would allow unionisation of 100,000 of FedEx's employees, mostly drivers, a move supported by the Teamster's Union, but strongly opposed by the company. FedEx has vowed to delay the purchase of new aircraft if the bill becomes law - although it will have a difficult path through the Senate, which rejected a similar proposed measure in 2007.

The Teamsters Union issued this release following the House's passage of the FAA Reauthorization Bill, 277-136:

"The Teamsters Union praised the US House of Representatives today for passing the FAA Reauthorization Bill, 277-136. The bill includes a key provision closing a loophole allowing FedEx Corp. to misclassify thousands of workers.

"The measure, called the Express Carrier Employee Protection Act, would remove FedEx from its status as the only company of its kind allowed to classify its package delivery workers under the Railway Labor Act (RLA). Package delivery workers in other companies are classified under the National Labor Relations Act (NLRA). This loophole has allowed FedEx to have an unfair competitive advantage and deprived its workers of the right to secure union representation.

"The House of Representatives has done the right thing in closing this unfair loophole that benefits only FedEx," said Teamsters General President Jim Hoffa. "Because of this unfair advantage, FedEx Express workers have been deprived their right to form unions like workers at other package delivery companies."

"Employees at FedEx Express who perform precisely the same work requiring the same skill sets are treated dramatically different under our labor laws and are subject to the Railway Labor Act even though they never touch an airplane," said Ken Hall, Teamsters International Vice President and Package Division Director. "Employees performing the same work, employed by companies that provide the same services, should have the same rights to organize a union."