Allegiant surges ahead, JetBlue up, WestJet loses, but lower oil prices good for all

Allegiant’s (+2.9%) aggressive expansion, while most around it are cutting back, is still finding favour with the market. The carrier reported strong growth in Jun-2009. WestJet (-3.9%), by contrast, lost ground as investors fretted that its expansive international plans might increase its risk profile.

Allegiant is still a quarter the size of JetBlue for example, but the unique airline is fast becoming a serious player in the US market.

Canada’s WestJet announced a flurry of new routes -  according to Chris Avery, Vice-President, Revenue and Planning "We have never announced as many destinations at one time.” The carrier’s international expansion, mostly to sunspots in the US and Central America, comes as flag carrier Air Canada approaches bankruptcy. It also follows the delay in a wider codeshare agreement with Southwest Airlines. 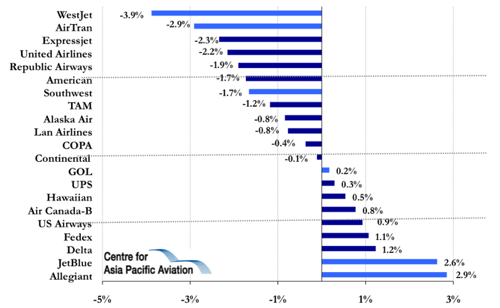