Another rally on US stock markets yesterday was brought to a halt when the Federal Reserve issued a revised forecast for US GDP growth in 2010, trimming expectations from 3.2-3.7% to 3.0-3.5%. The Conference Board stated the rebound effects from the recession have “almost entirely dissipated” and a growth slowdown starting this summer is “becoming increasingly apparent”.

The Conference Board added: “GDP growth for the second quarter, which just ended, might turn out to be the highest for the year, and even here there is a downside risk of the consumer data coming in lower than currently forecasted, despite an uptick in April (and March).” But it noted there were “no signs of a ‘double dip’ recession”.

GOL (+2.0%) gained for a sixth consecutive session, as Raymond James & Associates raised its rating on the carrier, citing “earnings momentum.” 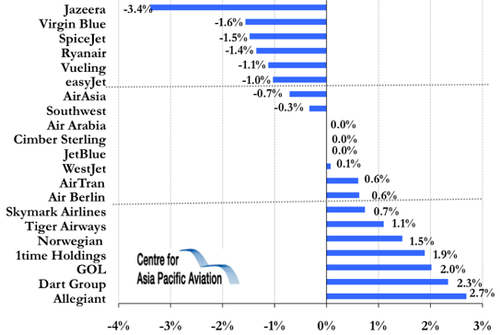