All Nippon Airways, due to non-flying businesses, returns to black with 25% international growth

All Nippon Airways Holdings returned to the black in 1Q2014, the three months to 30-Jun-2014. The flagship air transport segment reduced losses but remained in the red, however this view is incomplete as intra-segment transfers have revenue credited to very profitable other segments. Regardless of where the money flowed, the story was in ANA's air transport segment, and especially international services. International ASKs grew mostly due to new daytime Tokyo Haneda slots, and international is very much ANA's theme as it looks to move to operating more international than domestic ASKs.

ANA's position is comfortable but there are areas for improvement, starting with the recent expansion that grew ahead of demand: the 25.2% ASK increase was larger than the 21.7% increase in RPKs. The growth propelled ANA to becoming larger than Japan Airlines internationally, but also led to decreased load factors in Europe by approximately 5ppts. The system wide international load factor, at 69%, still shows room for improvement. ANA's core domestic market, responsible for the bulk of profits, suffered unwelcome yield pressure as ANA discounted tickets to grow RPKs by 3.5% while marginally decreasing ASKs by 0.5%. Domestic load factors grew 2.2ppts, but to a still low 59.2%.

ANA Group is in the black but flying division has only reduced losses, not reversed them

The ANA Group squeaked back into the black as a 10% increase in revenue was met with a lower 8.2% increase in costs, allowing the ANA Group to post a JPY300 million (USD3 million) operating profit. 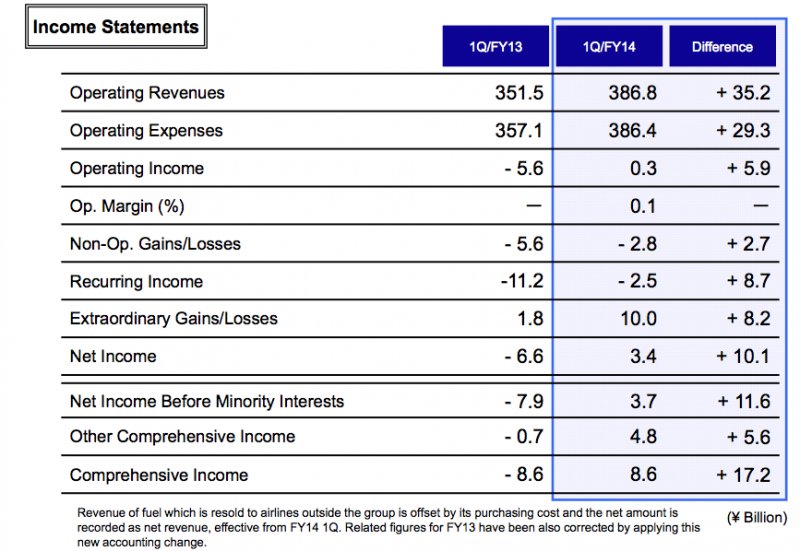 The air transport segment showed the largest gain by far due to the increased flying, to be discussed in the next section. 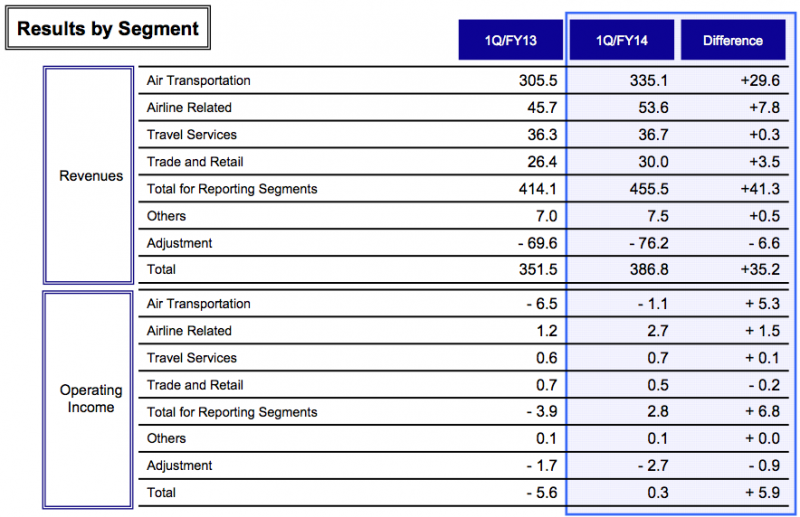 However, these figures are not clear cut. The airline-related segment derives 79% of revenue from intra-segment transfers, meaning that in reality that segment is dependent on ANA's air transport segment but accounting allows it to claim profit that originates from the air transport segment.

The Mar-2014 international expansion was broadly a result of securing the majority of international daytime slots at Tokyo Haneda that were recently made available. Slots were dispersed for service to Europe, Asia and one slot to Canada. The European slots were used mostly to re-allocate Tokyo Narita services to Tokyo Haneda. (Unrelated to Haneda slots, ANA in Mar-2014 launched a new Narita-Dusseldorf service.) Total European ASKs grew by 26% while RPKs grew at 13%.

Slots to Asian countries were mostly used to launch new services while ANA used the Canada slot to launch its first Canadian service, a Haneda-Vancouver flight. Asian ASKs grew by 27% while Asian RPKs grew by 24%, indicating a closer absorption of capacity. 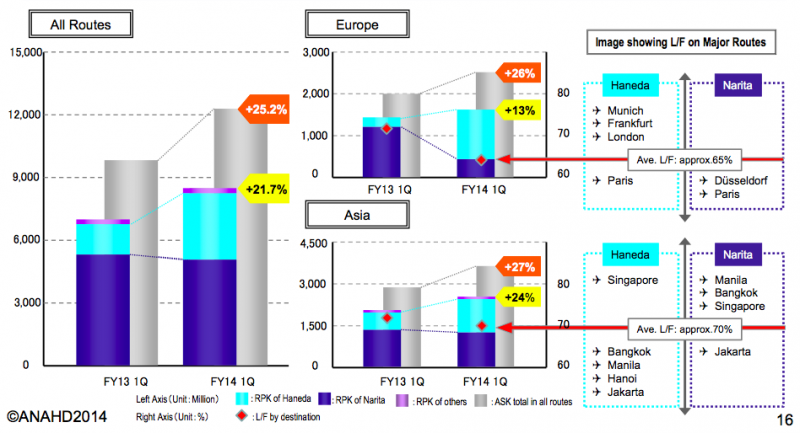 The expansion in Europe however has yet to be absorbed as European load factor fell by 5-10ppt (ANA has not confirmed the exact figure) in 1Q2014 to below 70%. In comparison North America and Asia (the latter where Haneda growth was also concentrated) saw a slight weakening but were still above 70%.

ANA’s China load factor improved by approximately 5ppt to about 60%, although this is still down from 1Q2012, before a China-Japan territorial dispute weakened traffic. China capacity has broadly returned but RPKs are still depressed. 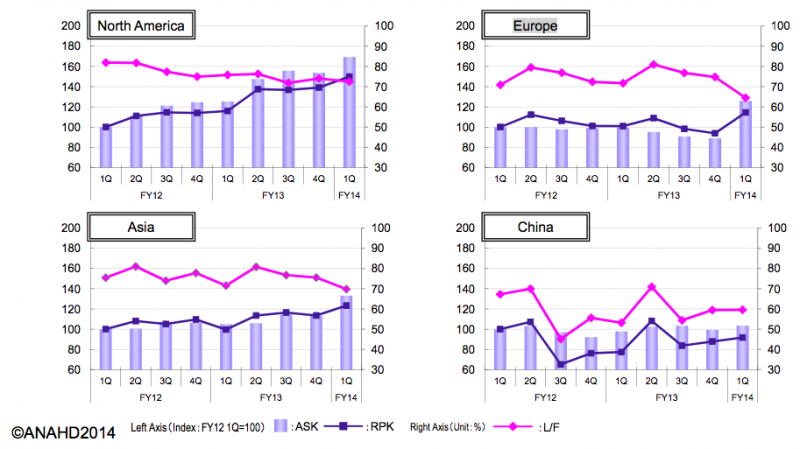 Overall international load factor weakened 2ppt to 69%, rather low for international performance. Revenues grew 22%, in line with RPK growth, and yields showed a modest 0.3% improvement. However, due to the decline in load factor, unit revenue decreased 2.5%. 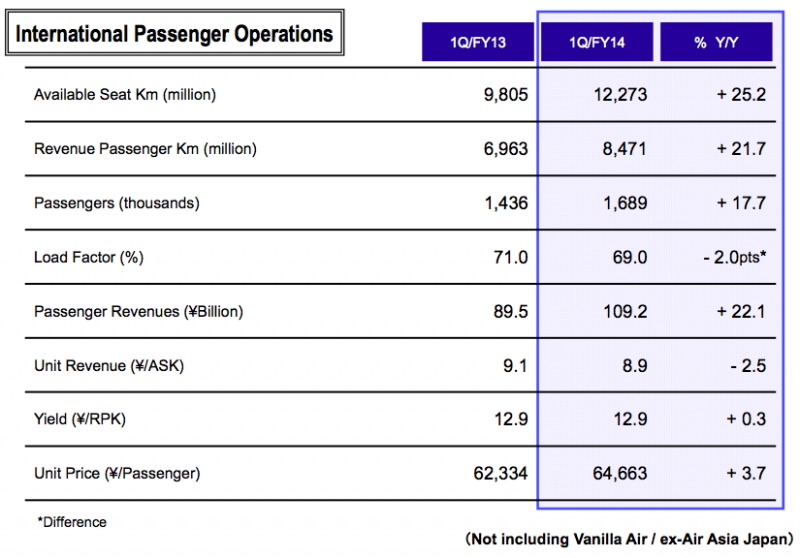 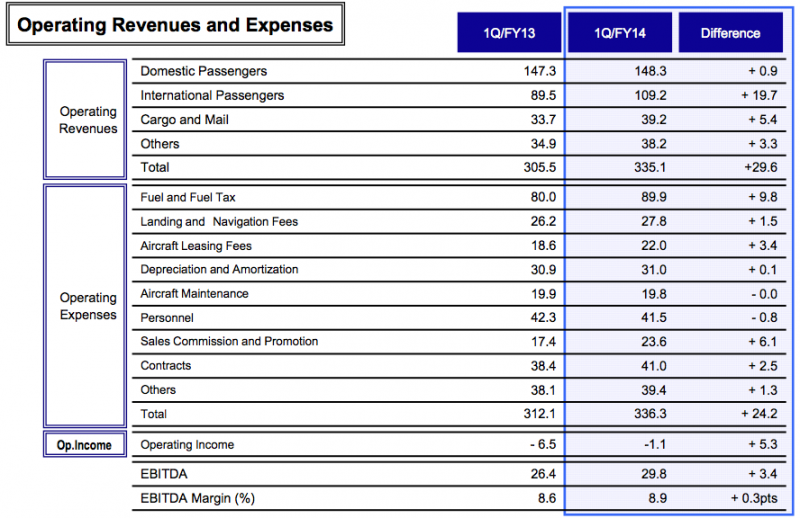 ANA decreases capacity in domestic market, where yields are under pressure

ANA’s domestic business saw a 0.5% decrease in ASKs, in line with ANA’s long-term objective to reduce both domestic capacity and exposure to the domestic market.

However, domestic gains were through efficiency as ANA achieved a 3.5% increase in RPKs that led to a 2.2ppt gain in load factor to 59.2% – still low, but profitable (and handsomely so) for ANA. 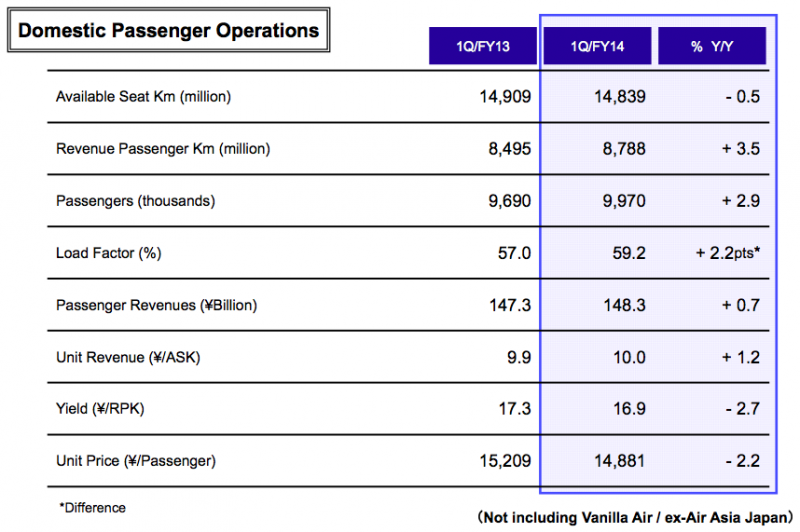 However, there was yield pressure. Due to the load factor gain, unit revenue increased 1.2%, but yields declined 2.7%. Overall domestic revenue increased only 0.7%, slower than the 3.5% increase in RPKs. ANA attributes this partially to fewer passengers in its premium domestic cabin, which negated JPY2 billion (USD19.6 million) revenue.

ANA in FY2013 (the year to 31-Mar-2014) added more passengers to the market than any other airline, and fare stimulation would have been needed to achieve this. However, Japan’s increased consumption tax may be a factor, with ANA needing to offer promotional fares to stimulate the market. This contrasts to ANA’s comments at the time of its FY2013 results that it was expecting no negative impact from the tax change.

Trends of domestic passengers by segment and unit price: 1Q2012-1Q2014 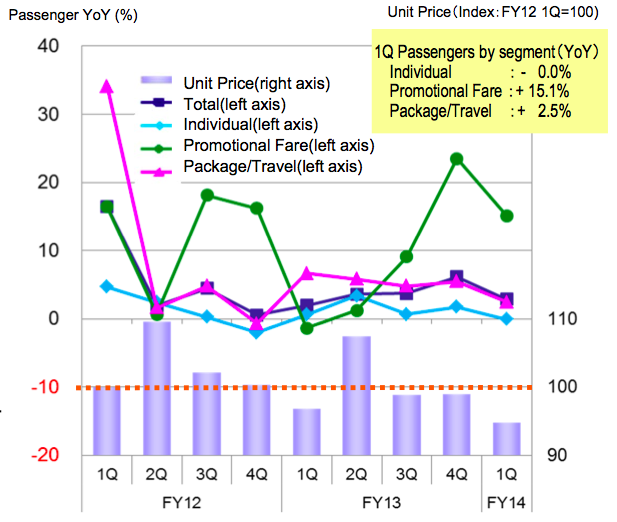 Vanilla Air is the re-branded AirAsia Japan LCC operation over which ANA took full control in 2013 when it acquired AirAsia Group’s 49% stake, giving ANA 100% control. Vanilla Air’s performance is excluded from ANA’s domestic and international figures but is included in ANA’s “other” air transport segment. This segment reports revenue and operating profit across the segment and not components, so Vanilla Air’s revenue and assumed loss is not disclosed.

During the shareholding change and re-branding, the LCC paused operations, taking its last flight in late Oct-2013 and resuming in late Dec-2013. In 1Q2014, Vanilla had rebounded and was larger in size than AirAsia Japan had been in 1Q2013. ASKs were 37.5% higher while RPKs were 50.3% higher, leading to a 5.1ppt gain in load factor. However, load factor was still very low at 59.7%, only 0.5ppt higher than ANA’s mainline domestic load factor. Vanilla Air, as is typical of a LCC, needs a higher load factor to be profitable.

CAPA previously wrote about Vanilla Air’s transition, fleet growth plans and network objectives. At the time Vanilla Air wanted to expand to Taipei (ex-Taiwanese market is strong to Japan) but faced difficulty securing slots due to runway works there. Vanilla Air has since secured slots. Vanilla Air also plans to launch service from Tokyo Narita to Hong Kong and Kaohsiung. Hong Kong will be served from Nov-2014 with three-weekly flights, increasing to double daily by Mar-2015, and Kaohsiung from Feb-2015 with a daily service.

Although ANA has shown it can make Vanilla bigger than AirAsia Japan, the real test is doing so profitably and if ANA can put its legacy mindset behind it to secure a low cost base for Vanilla. Vanilla continues to be based only at Tokyo Narita airport, where Jetstar Japan is and from where Spring Airlines Japan recently launched. ANA does not have a good track record in its seemingly half hearted participation in the low cost market and will need to demonstrate new strengths if Vanilla is to become a viable product.

This provides for a stiff competitive outlook, although for now limited: Jetstar Japan is only in the domestic market but this year plans to expand internationally while Spring is looking at smaller markets. The re-entry of AirAsia Japan will be at Nagoya, alleviating potential further competitive pressure at Tokyo (if AirAsia Japan were to re-enter Tokyo).

Cargo and mail revenue grew 16.3% to JPY5.4 billion (USD53 million), with almost all of the revenue gains in the international market. In terms of volume, domestic capacity decreased 2.1% but RTKs increased 10.1% leading to a 2.7ppts improvement in load factor to 24.2% (low but this is mostly operated in passenger aircraft bellyholds).

International cargo capacity grew by 31.1% while RTKs grew by 33.8%, leading to 1.3ppt improvement in load factor to 66.4%. International air cargo increased due to passenger flight growth but also new freighter services to Singapore and Jakarta. Pricing was strong in the domestic market but weakened internationally.

Since 1Q2014, ANA has taken delivery of its first 787-9 and became the first airline to operate the 787-9 on regular passenger services, initially doing so in the domestic market. As with the 787-8, ANA will have some 787-9s in a domestic configuration and others in an international configuration. ANA has also confirmed the aircraft order it announced earlier in 2014.

See related report: All Nippon Airways order for 70 aircraft to help it shift to international markets, catch up to JAL 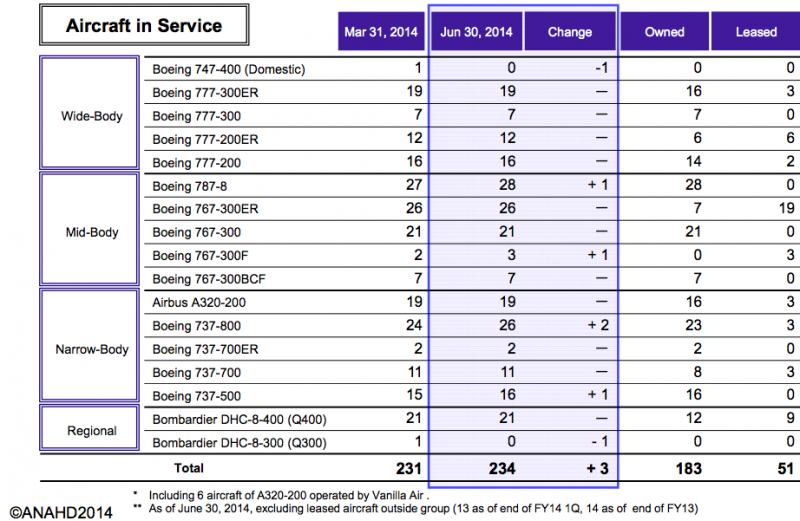 Outlook: ANA now has to bed down international growth, ensure Vanilla Air is not a drain

ANA's 9.7% ASK growth, including 25% internationally, was fast for the airline, and now it will need to bed down that growth and ideally make gains through load factor improvements, especially in Europe.

Although no further growth is planned, ANA is considering a number of new services and these are expected to materialise in the short and medium term as ANA pivots to international markets and takes delivery of more 787s. Vanilla Air risks becoming a disproportionately large burden while ANA's revenue pressure in its core domestic market is unwelcome.

ANA continues to be presented with opportunities to become more efficient but in reality sits on a comfortable position and does not see the urgency in changing. That is a position that will need to be constantly reevaluated.