Alitalia has announced it will join Air France-KLM’s trans-Atlantic JV with Delta Air Lines, as part of a long-term agreement effective until at least 31-Mar-2022. The addition of Alitalia increases the JV’s capacity to approximately 26% of total trans-Atlantic capacity, with annual revenues estimated at more than USD10 billion. Shares in Air France-KLM dipped 1.8% yesterday.

Governance will be equally shared between Alitalia, Air France-KLM Group and Delta. Alitalia representatives will immediately join the JV's 11 working groups responsible for implementing and managing the agreement in the areas of network, revenue management, sales, product, frequent flyer, advertising/brand, cargo, operations, information technology, communications and finance. Alitalia will be included in all JV initiatives, including joint sales contracts, which launched in Jan-2009;

Air France-KLM CEO, Pierre-Henri Gourgeon, commented that it would be “natural that this successful partnership should continue with Alitalia's participation” with the Italian carrier being the third largest in Europe and providing access to the Rome-Fiumicino hub.

No plans for Air France-KLM merger

Meanwhile, Alitalia CEO, Rocco Sabelli, stated the carrier has no plans in the immediate or near future to merge with Air France-KLM. Air France, with a 25% stake in the Italian carrier, is already Alitalia's leading shareholder.

British Airways passengers down 12.5% in June

In the UK, shares in British Airways closed 1.0% lower, upon the release of its Jun-2010 traffic report. During the period, affected by industrial activity, passenger numbers were down 12.5% year-on-year. Load factor declined 2.8 ppts to 77.5% for the month. The carrier stated that profitability in the first quarter had been affected by the industrial unrest and volcanic ash closures, which led to lower volumes, despite yields being stronger year-on-year.

The full traffic report for British Airways for Jun-2010 is featured in today’s edition of Europe Airline Daily– subscribe today! 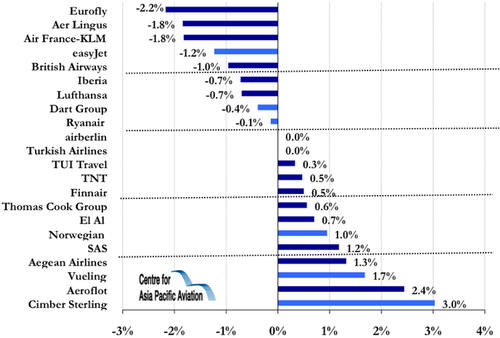