WestJet (+3.4%) was the greatest gainer of the day, despite reporting a 40.7% decline in net earnings to CAD9.2 million (USD8.5 million) in 2Q2009. CEO, Sean Dufry, attributed the fall to “the weakened economy and aggressive pricing”. The carrier's PRASM also dropped 15.4%, with a similar outlook expected for the third quarter. Air Canada's B shares were also up, after reporting improved load factor and plans to further cut costs the day before.

Alaska Airlines (-7.5%) and US Airways (-6.1%) took the largest dives, despite both reporting improved load factors earlier in the week. 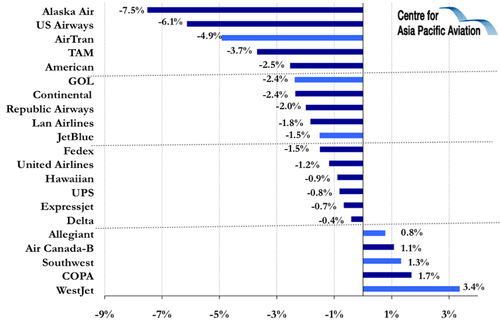 Continental Airlines (-2.4) announced the pricing of a public offering of 14.4 million shares of its Class B Common Stock, with the issuance and delivery of the shares to occur on 12-Aug-2009. Goldman Sachs is acting as sole underwriter for the offering.