North and South American airline stocks mostly fell for Friday (20-Aug-2010) as US investors remained concerned over the strength of recovery in the US economy. The Dow (-0.6%) was pushed lower by concerns over the weaker euro and a decline in the energy sector.

Alaska Air (-2.7%) plummeted for the day, after Soleil Securities lowered its price target of the carrier’s stock from USD70 to USD63. However, the analysts maintained a "buy" rating of Alaska’s stock.

Delta Air Lines (-2.1%) was also one of the biggest falls of the day. CEO Richard Anderson stated on 21-Aug-2010 that the carrier plans to recall furloughed cabin crew and hire a yet-to-be-determined number of new staff as it expands operations. Delta expects to start training the staff in Jan-2011 and have them flying by mid-2011.

Continental Airlines (-0.4%) announced it completed its previously announced private offering of USD800 million aggregate principal amount of 6.750% senior secured notes due 2015. The notes were sold only to qualified institutional buyers. They were issued under an indenture, dated 18-Aug-2010, among Continental, Continental’s wholly owned subsidiaries Air Micronesia, Inc (AMI) and Continental Micronesia, Inc (CMI), as guarantors, The Bank of New York Mellon Trust Company, NA, as trustee, and Wilmington Trust FSB, as collateral trustee. The senior secured notes will mature on 15-Sep-2015 and bear interest at a rate of 6.750% p/a, payable semi-annually on 15-Mar and 15-Sep of each year, beginning 15-Mar-2011. 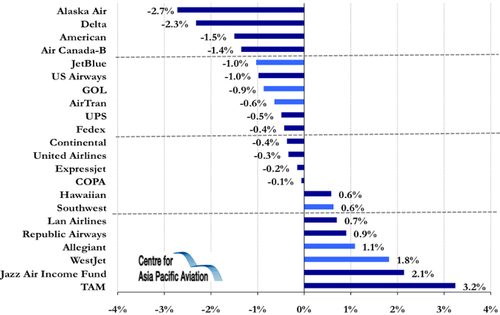