The majority of North and South American carriers’ stocks gained on Thursday (22-Apr-2010) as the airlines resumed operations to Europe with the reopening of the region’s airspace. Improved financial results from Alaska Air and Continental Airlines also impressed the market.

The wider market was relatively flat, with the Dow (+0.1%) up only marginally, after President Obama stated the economy is recovering, but that further progress is required to help the millions of unemployed US citizens. President Obama attributed the US recession to Wall Street and restated he plans to overhaul financial markets.

Chairman and CEO, Bill Ayer, stated this was the first time the group had reported a significant first quarter profit since 1999. According to Mr Ayer, posting a profit in seasonally its weakest quarter is “particularly noteworthy”.

As a result, Standard and Poor's Equity raised its rating for the carrier’s stock from ‘Hold’ to ‘Buy’.

Passenger numbers for the period were stable, handling 10.6 million passengers. Load factors were meanwhile up 4.3 ppts, to 80.1%. However, passenger yield (per RPM) was down 0.2%.

Chairman, Jeff Smisek, stated he was disappointed at the results, which were “impacted by the weak economy and the challenges we experienced with weather related closures of our Newark Liberty hub”. However, he added the improvement in revenue reflects the improving global economy and benefits received from its membership in the Star Alliance.

US Airways (-4.3%) took the day’s biggest fall after it announced during trading that it has discontinued recent discussions with United Airlines' parent, UAL Corporation, regarding a potential merger between the two companies. Chairman and CEO, Doug Parker, stated that after an extensive review and careful consideration, the carrier’s Board of Directors decided to discontinue discussions. Mr Parker added “It remains our belief that consolidation makes sense in an industry as fragmented as ours. Whether we participate or not, consolidation that leads to a more efficient industry better able to withstand economic volatility, global competition and the cyclical nature of our industry is a positive outcome”. United Airlines (+1.1%) ended trading up.

Meanwhile, Southwest Airlines (-1.0%) slipped despite reporting a net profit of USD11 million for 1Q2010, compared to a loss of USD91 million in the corresponding period last year.

Elsewhere, American Airlines (-2.5%) was also down on news UBS lowered its price target for the carrier from USD14 to USD12. The analysts stated American’s “argument that industry labour costs will eventually rise to AMR’s level is not a strong argument for its stock”. Expressjet (+3.1%) and Republic Airways (+2.9%) meanwhile gained. 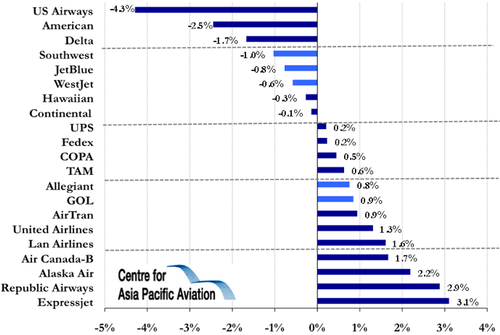