UPS (-0.1%) also slipped despite CFO Kurt Kuehn stating it plans to raise its FY2010 guidance with adjusted earnings per share expected to grow more than 50% over last year. The freight carrier reported a 80.5% rise in net profit for 3Q2010, to USD991 million, during trading.

CEO, Scott Davis stated the company continues to plan for a “slow-growth economic environment”, adding “some inventory rebuilding has occurred this year, but due to the low inventory-to-sales ratios and other indices, it appears that there may still be room for additional restocking”.

United Continental Holdings (+0.6%), formerly UAL Corp, made a minor gain for the day after United Airlines reported a net profit of USD387 million, compared to a loss of USD57 million in the previous corresponding period. Operating profit made a significant rise, up 508%, to USD535 million. The result was on a 21.7% gain in revenue for the period, to USD5,394 million. The result just missed analysts' expectations. Analysts on average had expected revenue of USD5,410 million, according to Bloomberg.

Continental also reported improved results for the quarter, with a net profit of USD354 million, compared to a loss of USD18 million in the previous corresponding period. Operating profit rose 623% for the quarter, to USD441 million, on a 21.7% rise in revenue, to USD5,394 million. Analysts on average had expected revenue to reach USD3,910 million, according to Bloomberg.

Delta Air Lines (+4.3%) also rose for the day after Standard & Poor's raised its ratings outlook on the carrier from ‘Negative’ to ‘Stable’, due to improved operating performance, which it stated has strengthened its credit ratio. The analysts have a ‘B’ corporate credit rating on the carrier. 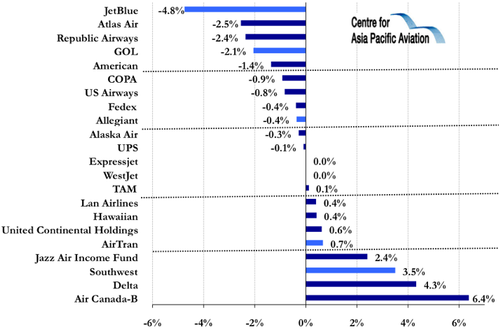