Kuwait’s Aviation Lease and Finance Company (ALAFCO) has finalised a purchase order for 50 A320neo family aircraft and took options for 30 more aircraft to be finalised by year-end. The aircraft will be powered by Pratt & Whitney’s PW1100G engine. The order is another big step for the Middle East’s largest leasing company, which now has a fleet of 48 owned and managed aircraft.

The order kicks off what is expected to be another successful year for the leasing company. ALAFCO recently reported a net profit of KWD47 million (USD171.2 million) for the year to 30-Sep-2011, a 335% increase over the KWD10.8 million profit in the previous year. Profit per share also more than quadrupled, up from 14 Kuwaiti fils per share to 60 fils per share. The profits were driven by a combination of the lessor’s expansion and exceptional gains realised through the adjustment of purchase agreements with aircraft manufacturers.

ALAFCO also successfully obtained USD266 million in financing for its aircraft acquisitions from local and international banks. The company specialises in leasing and finance in compliance with Islamic economic jurisprudence.

The firm A320neo contract is an increase of the initial agreement made at the Paris Le Bourget Air Show for 30 aircraft, which are now confirmed. The order shows new confidence and scale from ALAFCO – it is the lessor’s largest order by some margin. That it should expand the initial agreement speaks favourably about the strength of the company’s outlook. The order is also another ringing endorsement of Airbus’ A320neo, with a little under 1200 firm orders for the aircraft made in just 11 months, making it the fastest selling aircraft of all time.

ALAFCO’s initial MoU for 30 A320neos, signed at the Paris Air Show, came as something of a surprise. Despite the widespread attention that the A320neo has been receiving, the first indications that the leasing company was interested in the type came only a few days prior to the airshow.

Ahmad Abdulla Al-Zabin, ALAFCO chairman and CEO, described the aircraft as a “must have” in its portfolio to meet customer requirements. Earlier this year, the chairman revealed the company was already talking to interested parties for the 30 A320neos it committed to at Paris, even though delivery of the first 30 aircraft will be between 2017 and 2021.

ALAFCO was already an A320-family customers, ordering 26 over a number of small orders in the past five years. Twenty-five of these have been delivered to date. The aircraft are leased out to a number of carriers in the Middle East, China, India and Europe. 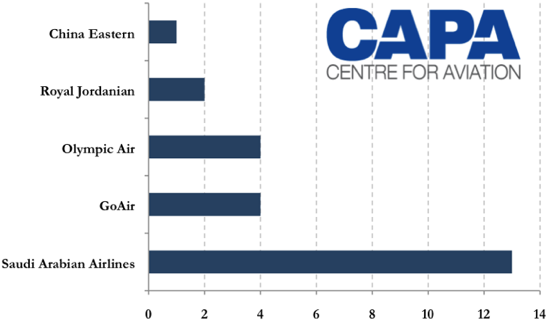 In the year to 30-Sep-2011, ALAFCO added eight aircraft to its portfolio. ALAFCO has ambitious plans to expand its portfolio beyond 100 aircraft by 2018, but the A320neo order has been made with an eye to the longer-term. Fifty-seven aircraft are scheduled to join the leasing company’s portfolio between 2014 and 2021.

High oil prices and swelling point-to-point demand in developing economies have sent airlines scurrying to buy next generation narrowbodies. Airbus and Boeing have almost 2000 orders and commitments between them for their respective A320neo and B737 MAX programmes. COMAC announced this week it has 165 firm orders for its new C919, Bombardier has 133 orders for the CSeries and Irkut has secured 235 orders and commitments for the MS-21.

ALAFCO may already be among those that have committed to Boeing’s B737 MAX. According to Mr Alzabin, the company is keeping an eye on the development of the aircraft, and in Sep-2011 he commented that ALAFCO would have no hesitation in ordering the competitor to the A320neo.

While ALAFCO has been increasing its narrowbody order book, it has also been busy divesting itself of some of its order for B787s. In 2007, the company ordered 22 Dreamliners from Boeing in two separate orders. The aircraft seemed destined for Kuwait Airways, but the carrier’s fleet restructuring plan fell foul of political interference.

It has now dropped another six B787s, with Oman Air agreeing to take over the order. ALAFCO has so far yet to comment on the deal.