US airline stocks were generally lower on Friday as the Dow snapped its eight-session run of gains on foreign interest rate increases.

The Conference Board’s Leading Economic Index for the US increased 0.1% in Feb-2010, as expected, following a 0.3% gain in Jan-2010 and a 1.2% rise in Dec-2009. Economist, Ken Goldstein, stated, “the indicators point to a slow recovery this summer. Going forward, the big question remains the strength of demand. Without increased consumer demand, job growth will likely be minimal over the next few months."

Brazil's Gol fell 3.5% on Friday, as the Bovespa stock index dropped 1.3%, for a third straight decline.

Also on Friday, Gol announced the conclusion of the expansion work on its Aircraft Maintenance Centre, in Confins (Minas Gerais), where the company carries out heavy airframe maintenance, preventive maintenance, aircraft painting and the internal configuration of the entire GOL and VARIG combined fleet. The expansion, which began in 2008, added a hangar, offices, storage areas, support areas and an expanded ramp area to the existing maintenance facility. With the end of the second phase, the LCC is now able to service up to 120 aircraft a year. The company is seeking certification by the US Federal Aviation Administration to serve international airlines. 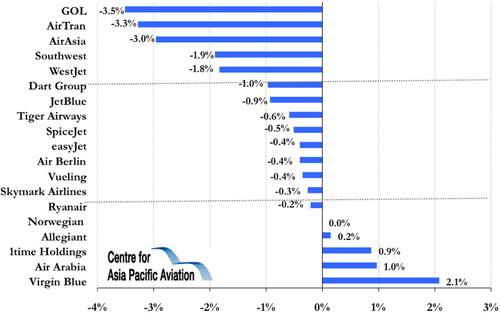