AirTran Airways has joined the liquidity stampede, announcing agreements with its credit card processor and lenders to provide the LCC with added flexibility entering the traditional weak Autumn/Winter periods in an already soft demand environment.

AirTran received an extension on its revolving line of credit and its letter of credit through to the end of 2010, and an extension of its credit card-processing agreement for the same length of time (see table below for more information). As a result, the company is not subject to any cash holdbacks (a key factor in Frontier Airlines’ entry into bankruptcy protection in Apr-2008 from which is has now emerged).

Several other major carriers in the Americas, including Delta Air Lines Inc and American Airlines’ parent, AMR, and US Airways, and LCCs, WestJet (Canada) and GOL (Brazil), have also moved to bolster available cash reserves over the past week.

Despite continuing financial turmoil in the aviation industry (and the economy as a whole), equity markets have surged and debt markets have loosened slightly, allowing carriers to refinance existing debt and/or find new sources of cash.

JetBlue raised approximately USD300 million in net proceeds from an equity issuance and convertible debt offering in 2Q2009, while Southwest boosted its liquidity position notably in 1Q2009, through a variety of measures, including revolving credit facilities, the private placement of USD400 million of its Senior Security Notes, and a two tranche sale and leaseback transaction covering some of its B737-700 equipment.

At the end of 2Q2009, United Airlines, Northwest, Continental and Delta had the largest cash balances of the US carriers, all above USD2 billion.

However, the US carriers also have high levels of debt and cash flows for operations are down substantially, according to IATA, which added that many airlines are experiencing a  “cash drain by commitments on debt repayments and capital spending, which follows significant cash burn across the industry in 2008”. 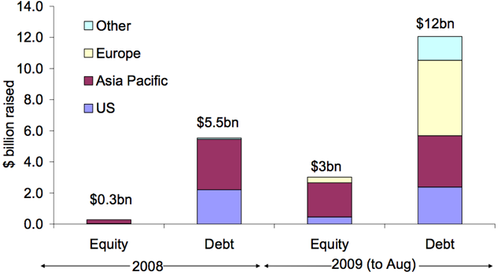 According to Fitch Ratings, weak fundamentals in some US airlines could also lead stronger carriers to commit to another round of consolidation.

While AirTran is unlikely to use its funds for such a purpose, the LCC has stated it could be interested in acquiring assets from weaker rivals, should the travel slump continue and airlines are forced into fire sales to raise cash.

Similarly, Allegiant Airlines (the fast growing leisure airline, which has little debt and no liquidity issues) continues to snap up MD-80 aircraft (and parts/engines) from US and international carriers (most recently including Japan Airlines) at “attractive prices”. Allegiant has previously stated that it can purchase and refurbish its MD-80 aircraft for as little as USD4 million.

Meanwhile, both American Airlines and Delta Air Lines are currently in talks with Japan Airlines regarding options for a joint business relationship with the struggling Tokyo-based carrier, while both could be bidders for UK’s BMI should Lufthansa put it on the market, to gain valuable slots at London Heathrow.

WestJet’s unexpected share issue has also fuelled speculation that the Canadian LCC is readying for its first acquisition. WestJet had a healthy cash balance of USD687 million as at Jun-2009. The issue price diluted the carrier’s share price, which has fallen approximately 14% since the beginning of the year.

Fitch Ratings warns of need for “emergency sources of capital”

The recent movements to bolster cash balances by the major US airlines is in line with Fitch Ratings’ warning that while revenue declines for US carriers are slowing and airline financial health is expected to improve in 2010, carriers are coming to the end of their liquidity reserves and will need “emergency sources of capital” to survive the slower Winter period.

According to Fitch, “following a period of extreme revenue pressure driven by the collapse in premium air travel demand over the past year, US airlines enter the fall with growing expectations that still-tentative signs of stabilisation in revenue trends over the last several weeks may pave the way for modest improvement in credit fundamentals and reduced bankruptcy risks moving into 2010. Fitch believes modest improvements in industry profit margins, cash flow and liquidity are more likely over the next year”.

Fitch stated that relative liquidity positions and capital market access remain the primary factors influencing its assessment of US airline credit quality (see table below). Fitch also noted that all of the US legacy carriers have seen their liquidity positions eroded materially as a result of almost two years of sustained operating pressure and constrained access to capital.

Looking ahead, Fitch expects that, even if revenues continue their “gradual firming trend” through the weak Winter period, some airlines will face “uncomfortably low cash balances” in early 2010, at which point they will seek emergency sources of capital.

Fitch added that it expects “tight credit market conditions and an absence of owned and unencumbered assets to limit the ability of large carriers to reliably raise capital at a time when heavy cash obligations, including debt maturities, pension funding and aircraft capital commitments, will continue to pressure liquidity. In addition, higher borrowing costs, persistently high leverage and chronically weak cash flow highlight the largely unsustainable nature of US airline capital structures”.