Chinese airport share price gains from earlier in the week were lost on Friday (07-Aug-2009) despite strong traffic reports. Beijing Capital International Airport’s shares slumped 5.7% despite reporting a 22.5% year-on-year increase in passenger numbers in Jul-2009. Shares in Shanghai Airport and Shenzhen Airport slumped 5.5% and 5.0%, respectively, as the typhoon season intensified.

Elsewhere in the region, Macquarie Airports’ shares fell 2.5% on Friday as the group announced a reduction in its foreign ownership from 35.7% to 35.2% (see below). Auckland Airport’s shares were suspended, as it completed a NZD25 million private bond placement (see below).

In Europe, airport shares were generally higher, with Fraport gaining 0.4%, while Aeroports de Paris’ shares went against the trend, closing down 1.5%. 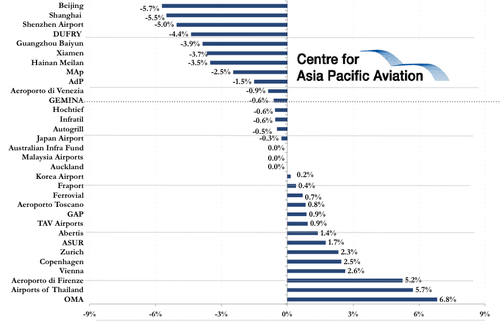 Auckland International Airport Limited stated it has completed a NZD25 million bond issue by private placement under its existing bond programme. The seven-year bonds mature on 10-Aug-2016, and carry an interest rate of 8.0% p/a.