Airport technology is one of the fastest developing aspects of the entire aviation industry. Passengers, though, may take another view, and a recent survey shows that they are quite specific about the technological enhancements that they wish to see prioritised.

In the background, but playing an increasingly important role, are new technologies arising out of mathematical formulae such as algorithms and computer applications like Blockchain, while the replacement of human labour with robotics threatens to put paid to many jobs.

This report provides an overview of some of the latest developments, and looks forward to a CAPA conference next year in which these subjects will be given a comprehensive airing.

IATA’s 2017 Global Passenger Survey of 10,675 respondents across 153 countries reveals that passengers expect technology to give them more “personal control over their travel experience.”

Among the wish list findings are several critical airport related demands such as greater automation of airport processes like security and border control, which are described as the “biggest pain points”.

Especially so is the variation in security screening procedures at different airports, the inconvenience of having to unpack electronic devices in carry-on bags and – worst of all – the intrusiveness of having to remove personal items.

Other desirable developments would include: 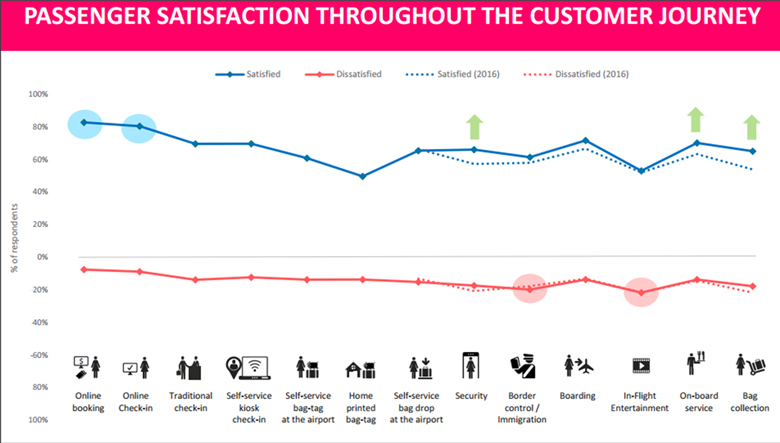 These collective responses tally loosely with related findings in an article in the CAPA journal, Airline Leader (Issue #40), where it is noted that it is not beautiful terminals, advanced technologies manifested in the way of circular runways or floating airports, endless shopping options, gymnasiums, libraries or tropical gardens that dominate most passengers’ needs, wants and demands.

Rather, they (still) simply want to get through the airport as quickly as possible at either end of their journey (very, very few are flying for the pleasure of it, and have another purpose altogether). They want to be able to access instant and comprehensive information about their journey at each stage – before leaving the home or office, en route to the airport, at all stages passing through it, and before arrival at the other end.

And this desired data needs to incorporate elements that are on the periphery of the aviation business per se. Elements such as interaction with the ever growing number of air-rail links from the airport to the city or the suburbs (not everyone is heading ‘downtown’) or to cities further afield, or even just local public transport to the nearby ‘airport city’. Or with peer-to-peer personal transport networks such as Uber, or Lyft, or the many other proliferating variants.

In a CAPA report on that proliferation published in 2016 (https://centreforaviation.com/shop/tnc) the following proposal was made:

“An integrated seamless system – which cannot be far in the future now, as mind-boggling as it might seem – would permit a corporately funded or financially well-heeled passenger to take, for example, a premium car share sub-brand to one or more international global air alliance flights, then on to a local business jet flight and on to another premium car share or helicopter to the final destination in another TNC’s (Transportation Network Company) sub-brand, all booked through the first international airline. Or perhaps through an integrator that is still in the incubator.”

What might have been added is the airport connection in all this. If this variety of activity, which will probably be demanded by most passengers within ten years can be coordinated by an airport so that it becomes the nexus of passenger activity at the expense of the airlines, then the airport that becomes the market leader in this application of technology will give itself a very powerful commercial advantage. This spread of activities is demanded by many of the ‘millennials’ already, never mind the well-heeled.

So, what is happening?

Airports are good examples of the milieu in which groundbreaking technology can be applied if a use can be found for it.

But just as with graphene, the ultra-thin ‘world-beating’ carbon compound that was supposed to have found 1000 or more applications by now (but has so far discovered few), actually identifying those applications in the airport business has been harder than expected.

There is much emphasis on the application of algorithms, which are a series of instructions, like a flowchart, which can be followed to solve a specific problem. Although not a ‘technology’ per se, they can be found in such activities as: the scheduling of departing aircraft to avoid heavy aircraft jet engine thrust adversely affecting smaller aircraft behind them (algorithms are particularly appropriate to that sort of activity), and baggage handling. 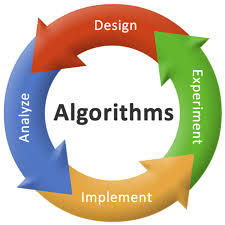 Others are under development, or already in use, to tackle airport congestion (perfect for ACI’s much-vaunted Airport Collaborative Decision Making [A-CDM] programme), both on the runway and at the gate, which chimes in perfectly with the IATA passenger ‘wish list’.  The control of arrival and departure waves at major hub airports is an obvious application.

Ground staff scheduling, fuelling and catering are also applications, and last year a British university developed an algorithm to complement slot allocation – a thorny area if ever there was one.

But even if algorithms can’t solve everything, their application in the airport context is surely at a very early stage. When one considers that such widely divergent applications as Google’s search facility, many of Facebook’s features, electronic stock exchange trading, and the warehousing and distribution operation encompassing two million items each day at Britain’s largest online food supermarket, all fall under the scope of algorithms, the potential is evidently enormous.

Blockchain will become part of the global glossary

Much the same is true of Blockchain, the distributed computing system technology which has found applications in digital passport recognition at airports.

Blockchain is particularly adept, for example, at the integration of information between the different players in a passenger’s hopefully seamless journey through an airport. This process involves the airport, airline, ground handling company and one or more IT supplier services, so that in the event of something going wrong that involves one or more of those players the passenger can be apprised of the situation and of his or her alternatives immediately (as long as he has the tools to do so). At the same time it is ensured that all those players are simultaneously updated as well.

Again, that chimes perfectly with what A-CDM hopes to achieve for the players and ultimately, the customers.

Blockchain is adept at the integration of information 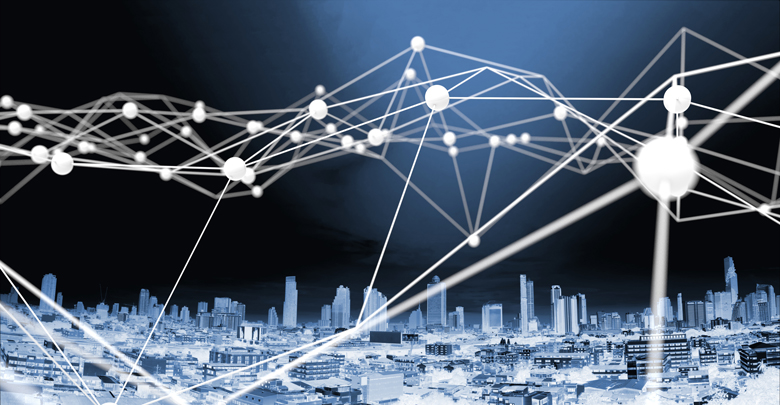 Blockchain is essentially a verification mechanism, and the talk already is that just as ‘to google’ has become a verb with a permanent place in the global lexicon, ‘to verify’ will be next. Further, that by becoming part of the ‘Internet of Things’ it will ‘take over’ just as the internet did.

But Blockchain exists within the structure of globalisation and the digital world, and is about trust. The problem is, how much intrusion will passengers be able to tolerate? They already have come to terms with Big Brother-like CCTV surveillance and iris recognition technology (based on an algorithm), and security scanning devices that reduce them to a skeleton, but everyone has their limit. When technology itself becomes a pain point it can swiftly be rejected.

And we haven’t even mentioned the March of the Robots and how they will replace human jobs on an industrial scale. Nor the swarming of the drones.

Existing technologies will expand faster in the short term

Outside the longer term potential offered by these highly technological and mathematical developments, there are new products and systems being introduced around the world on a daily basis, right now.

The annual expenditure on airport security systems, for example, which have been increasingly technologically focused since the Pan Am 103 incident in 1988, is set to top USD12.67 billion by 2023. This is even allowing for the fact that the ‘silver bullet’ – the machine that will dispense with the need to take off your jacket, shoes and belt and to buy your sunscreen airside – is (reportedly) “just around the corner”.

This process cannot represent the height of human endeavour

The scope for the more mundane and existing technologies is therefore equally as big. The multinational aviation-oriented CIT company SITA, for example, recently said that 51% of airports worldwide plan to implement self-service boarding gate facilities using biometric technology by 2020, and 85% of airports will invest in ‘cloud’ services over the same period. SITA also believes that ‘Internet of Things’ initiatives are “becoming investment priorities at airports".

Meanwhile, the all-self-service airport edged a step closer recently with the installation of the world’s first biometric bag-drop facility, at Auckland Airport in New Zealand.

The propensity is for a new Internet to emerge that is very specific to this industry; the Internet of Airports if you like.

Ultimately, though, airports cannot afford to lose money on the implementation of any new technology, no matter how much it benefits the customer.

CAPA is committed to the technology sector

On Monday 30-Oct-2017, for example, there were nine news items covering Cambodia, China, India, the Maldives, Sweden, and the companies SITA and the Materna Group. The Indian report concerns passengers now being able to use a biometric identification system to enter airports in the country, while in Sweden self-service automatic document control has been introduced at a remote northern airport. The same reports can also be sent directly to a subscriber’s preferred device (laptop, smartphone, tablet etc.) as a ‘CAPA Alert’.

Moreover, at the second Global Airport Leaders Forum (GALF), to be held in Dubai in May-2018, airport technology will figure highly on the agenda. Presentations and panel sessions at this CAPA-organised event being held during the Dubai Airport Show will cover a diverse range of subjects, including:

(N.B. These topics are guidelines only at the time of writing, and the agenda is subject tochange)

The Dubai Airport Show, now in its 18th year, is the world’s largest airport industry showcase and the leading B2B event, with over 300 of the foremost companies from around the world participating in 2017, and over 7,500 attendees.