After a brief respite from much of the construction activity at airports during the pandemic, it is once again time to examine where the main opportunities lie for supply chain business working in the airports sector.

This feature reports on some of the comprehensive data contained within the CAPA Airport Construction Database, one of several components of the airport-related suite of products offered by CAPA and one that also includes the Global Airport Investor Database, Airport Charges Comparison and Traffic Comparison.

The investment levels in the sector have shrunk during the pandemic, as is only to be expected, and the recovery will be hampered by the economic effects of the war in Ukraine. Nevertheless, opportunities still exist as plans are revived for new infrastructure.

What follows is the first of two articles on the top level projects at existing airports and in the construction of new ones. There are hundreds of other projects listed in the databases.

Periodically CAPA publishes an overview of global airport construction activities, a synopsis of its long-standing Airport Construction Database, which is part of membership packages.

The last one was in Dec-2019, just before the global onset of the coronavirus pandemic

Before that, in May-2018, it was reported that the total global airport infrastructure capex on existing and new airports was USD800 billion, which was a reduction on figures that had been calculated in previous reports.

Early on during the COVID-19 pandemic there was also an update published, which concluded that airport construction had already begun to lag behind long term needs, following the opening of the new Istanbul and Beijing Daxing airports. It was estimated at that stage that only USD148 billion of airport capex infrastructure would be concluded during 2020 – virtually all of it on projects that had begun long before the pandemic.

So, as we appear to have reached a ‘pre-post-pandemic’ stage, one of the “end of the beginning” rather than the “beginning of the end” (to quote Winston Churchill), this is an appropriate moment to reappraise those construction activities now.

It will be done in two parts, this first one providing introductory data and then dealing with Asia Pacific, the location of typically (and presently) the greatest amount of capex on airports, and Europe.

The second part will deal with the Americas, Africa and the Middle East.

The four charts below demonstrate:

Chart 1. The number of airport construction projects of all kinds (runways, terminals etc.) that are known to be under way and incomplete, as of Mar-2022.

Chart 2. The investment value (in USD) of those projects.

Chart 3. The ratio of projects by region.

Chart 4. The ratio of expenditure by region.

Chart 1: number of airport construction projects of all kinds (runways, terminals etc) known to be under way and incomplete, as of Mar-2022. 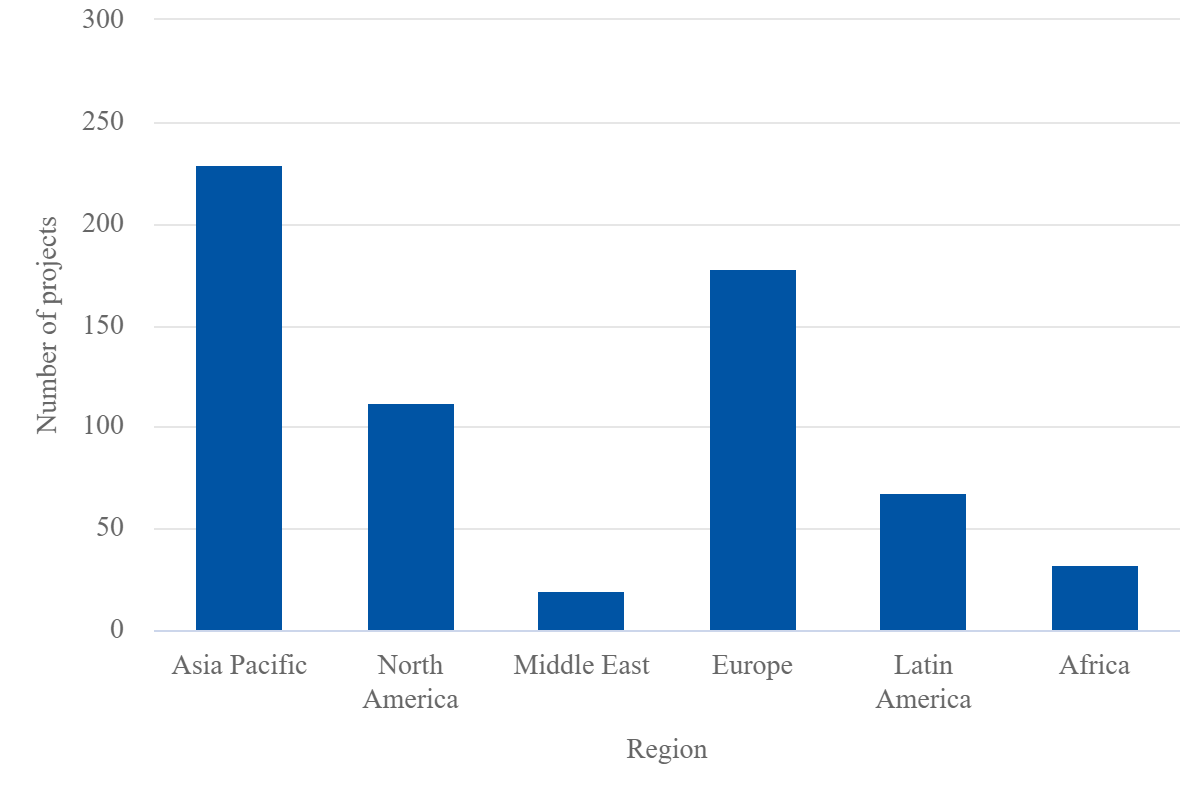 Chart 2:  the investment value (in USD) of those projects 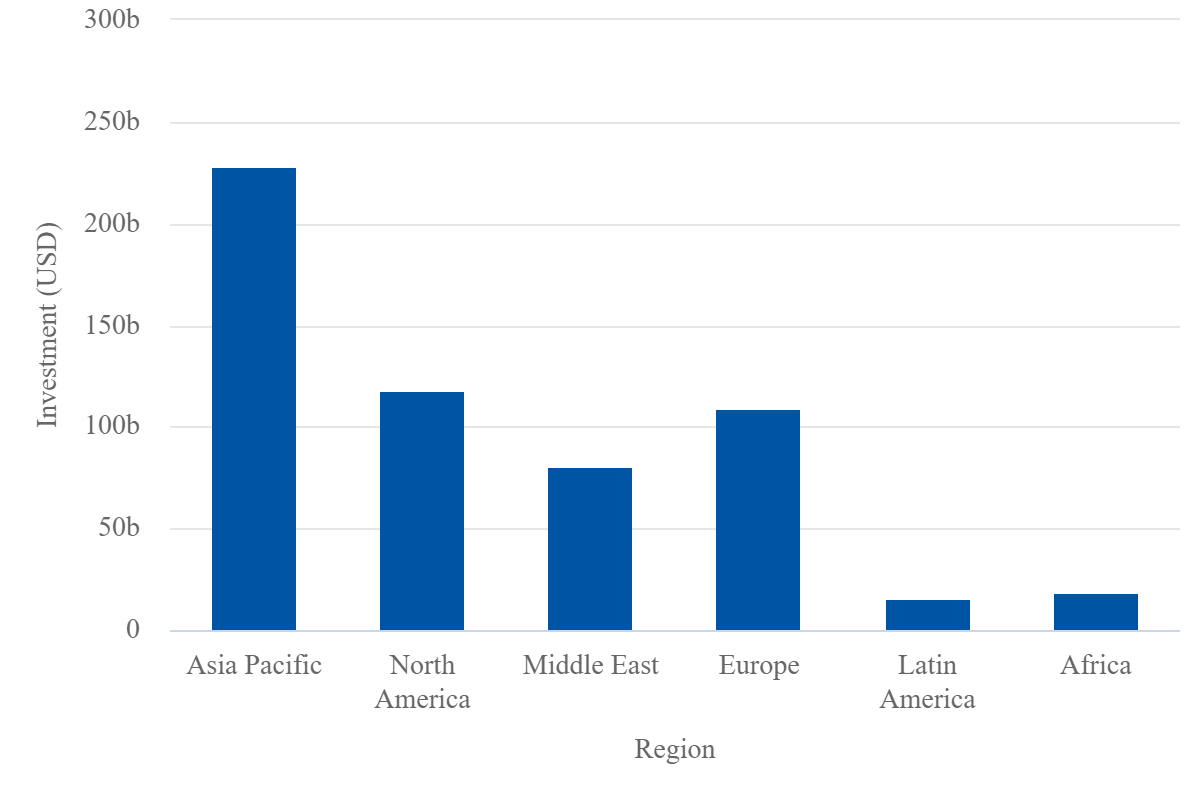 Chart 3: the ratio of projects by region 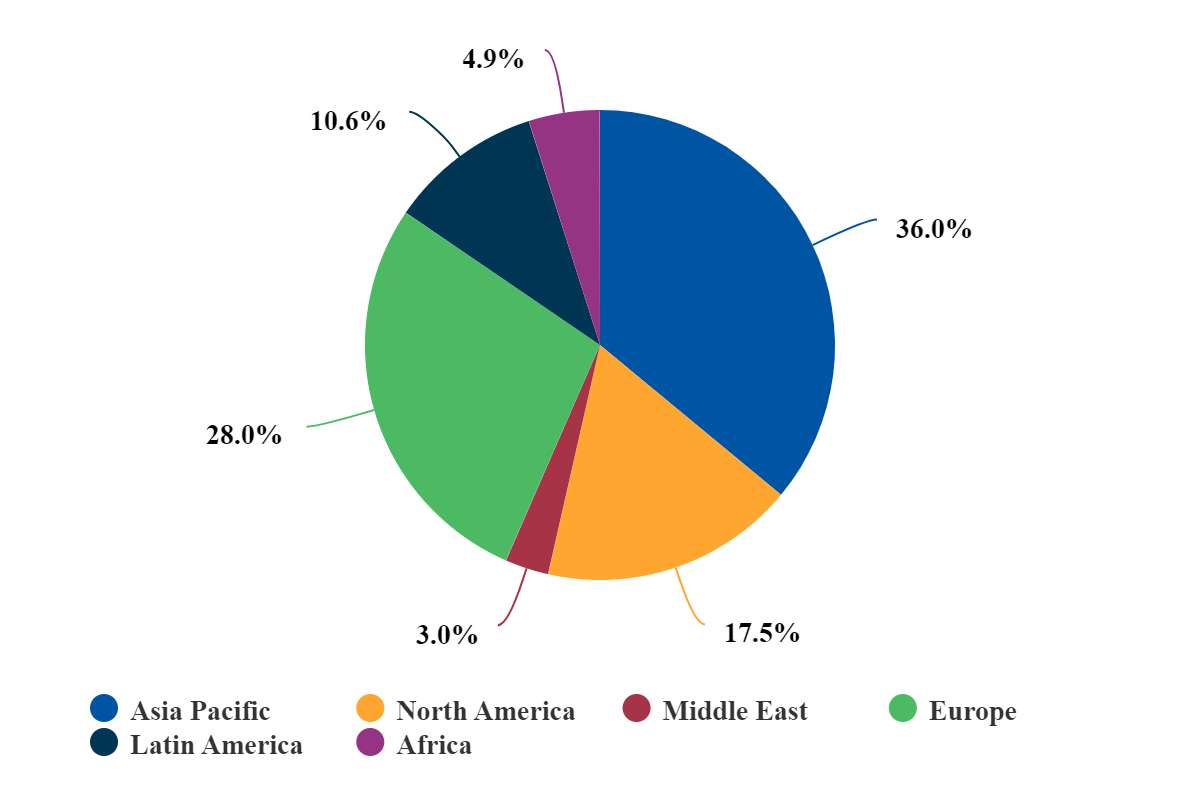 Chart 4: the ratio of expenditure by region 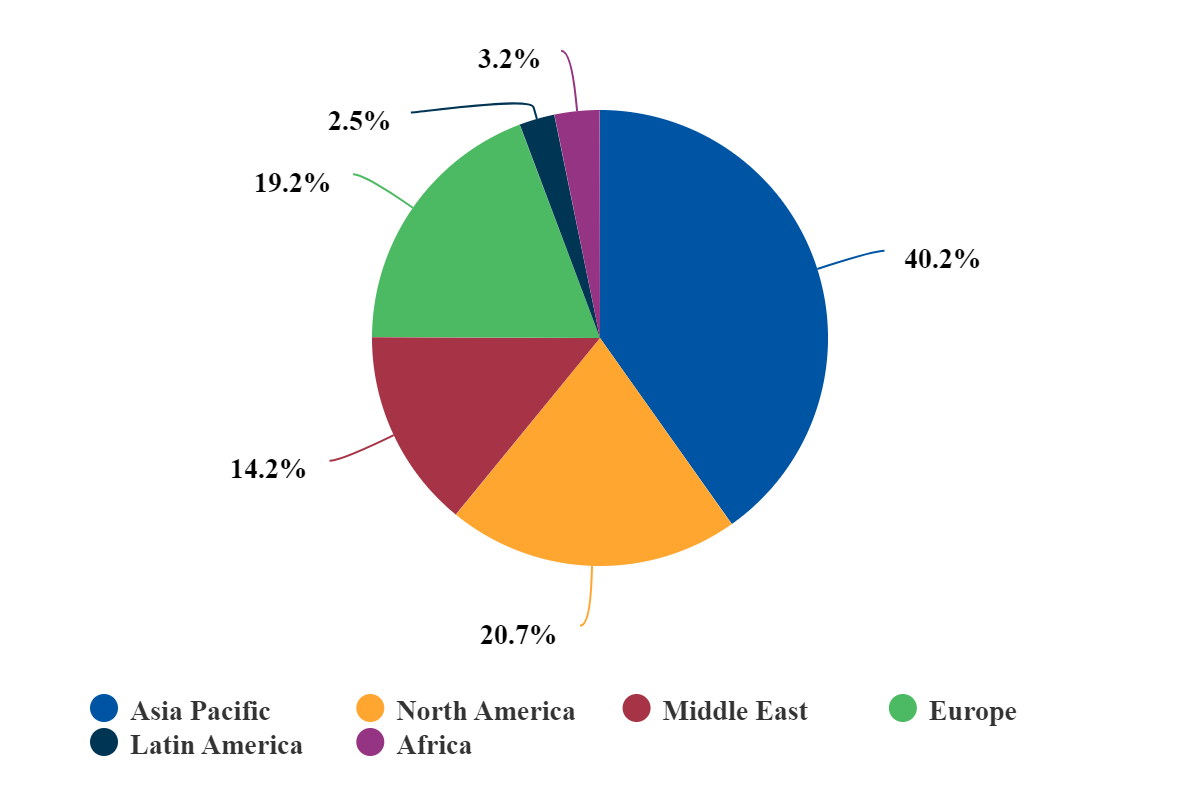 Contrasting Chart 1 with Chart 2, and Chart 3 with Chart 4, it is evident that while the two leading regions for the number of projects are Asia Pacific and Europe, the latter slips to third place in the investment chart behind North America, suggesting that project size and scope is inferior in Europe.

Also, that expenditure in the Middle East is higher than the project count would suggest, whereas in Latin America and Africa it is lower.

In total there are 633 known projects at existing airports globally, with an aggregate investment of USD565.7 billion.

With regard to new airports, the CAPA Airport Construction Database currently lists 202 greenfield projects that are under way or planned. A number of these have been planned for several years and may be lapsed, although no formal statements have been made to that effect – hence they remain in the database.

Since the database was first created the number of known new airport projects has diminished considerably. There were once over 450.

Chart 5 shows the distribution of these projects by region, with Asia Pacific well ahead of other regions, and there being more of them in Africa than in Europe.

North America is the region with the least, and that has been the case throughout the history of this database. North America in general doesn’t ‘do’ new airports. The philosophy is one of ‘make do and mend.’

Chart 5: the distribution of these projects by region 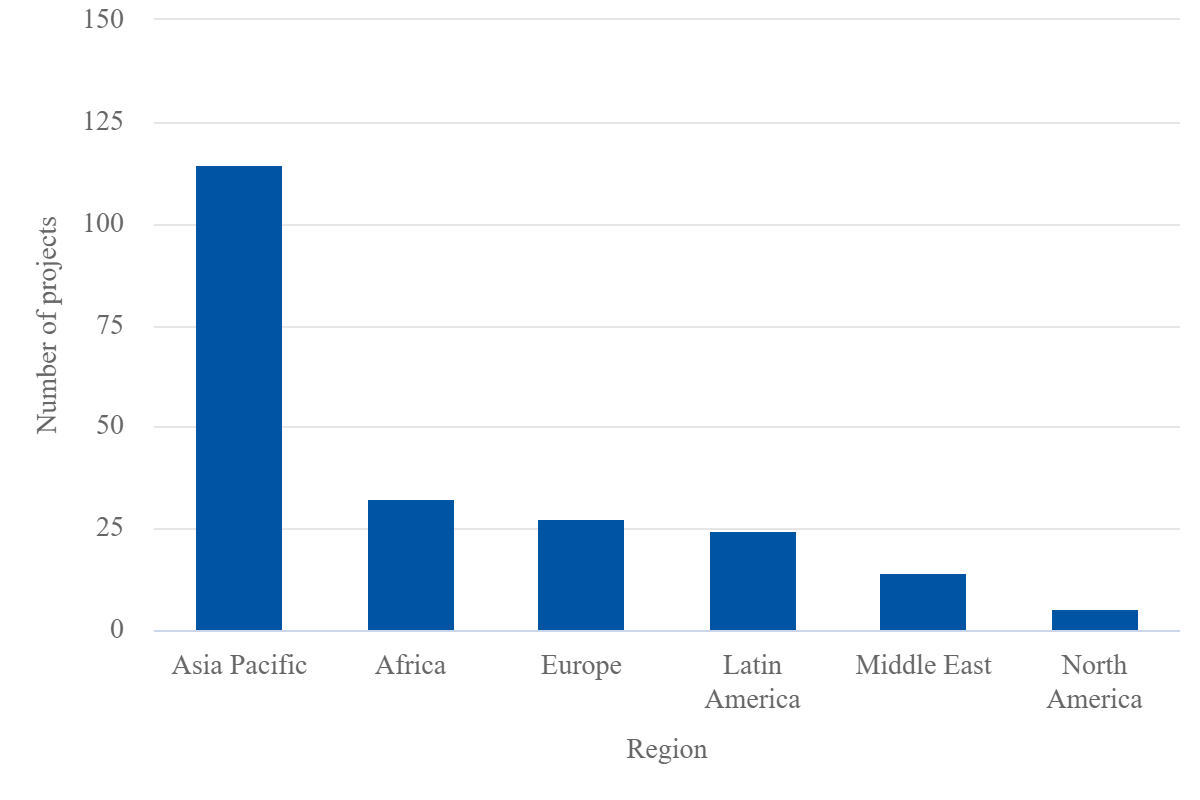 Finally in this introductory section, Chart 6 shows the varying levels of capex invested in the new airports by region.

Asia Pacific is far ahead of the field, with current committed investment of USD117 billion. North America trails in last with an embarrassing USD3.4 billion.

Chart 6: the varying levels of capex invested in the new airports by region 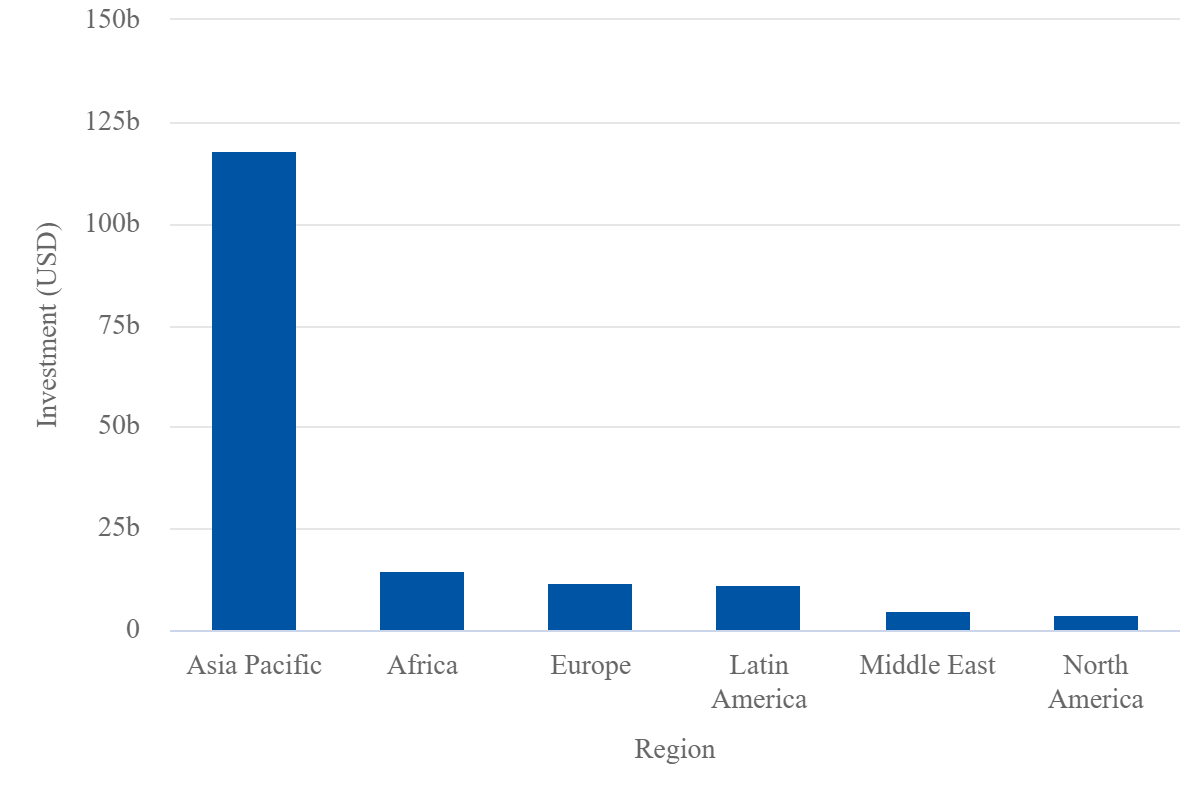 Hong Kong has the highest level of infrastructure expenditure in Asia Pacific, including on its new runway

Looking first at the position in Asia Pacific, there are currently 228 known infrastructure projects in the region, valued at USD227 billion. 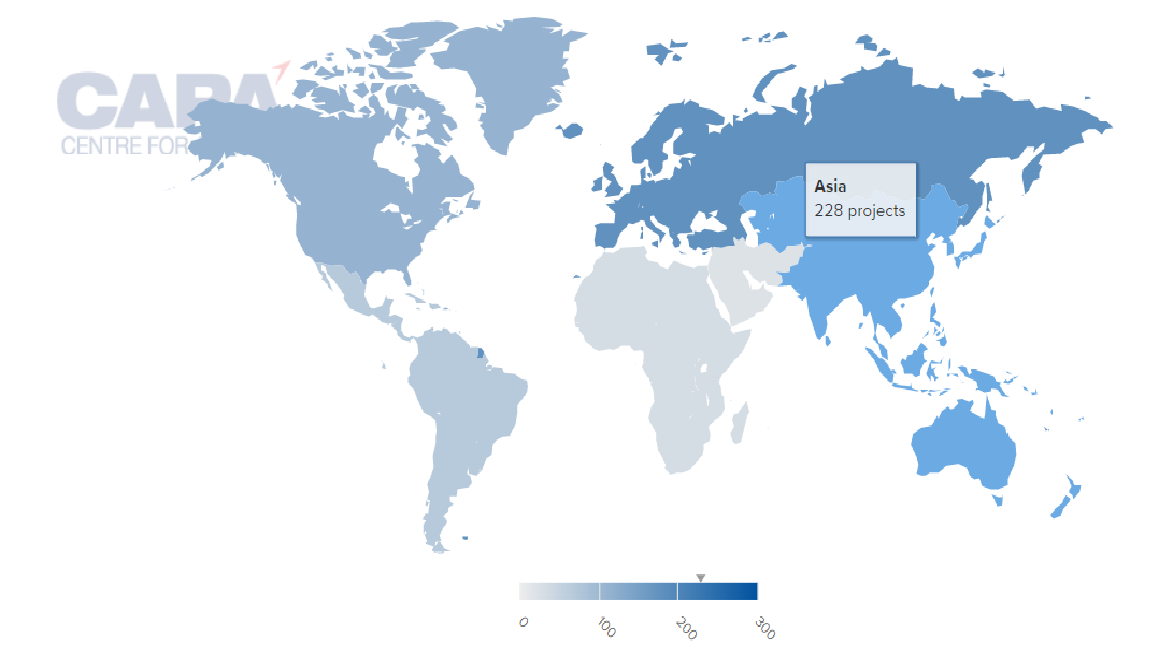 The Top 10 are listed below as they appear in the Airport Construction Database, the writer having selected the ‘Investment USD’ option, which lists them highest to lowest for the region ‘Asia Pacific’ (more specific options such as ‘South Asia’ and ‘Northeast Asia’ can be selected, five in all). 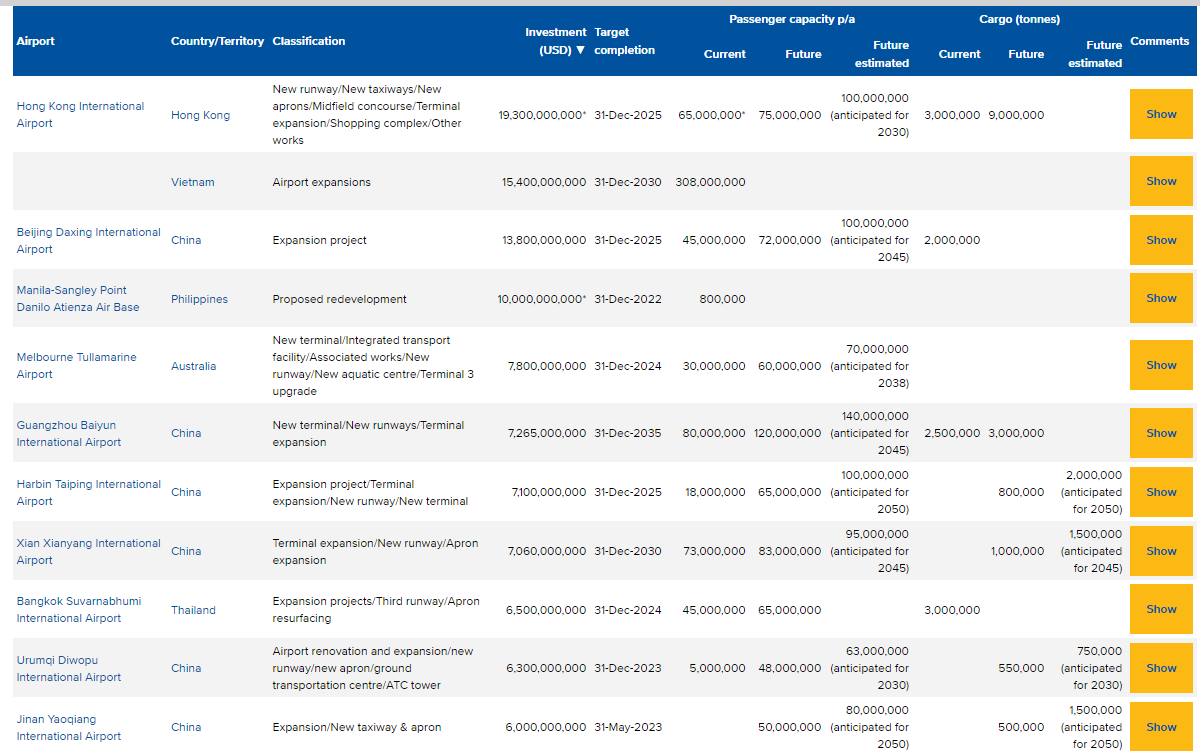 Note that the second entry is for a country, Vietnam, rather than a particular airport.

Such entries are made usually when information on the allocation of funds for airport development is indeterminate.

Seven of the top 10 projects are in China

The first observation is that all but three of those 11 entries concern Chinese airports and they are led by the USD19 billion expenditure in the Special Administrative Region of Hong Kong; the second biggest in the world (* see below).

The second highest in the region is for the Beijing Daxing Airport, which is still under development.

Immediately behind it is the Manila Sangley Point in the Philippines. The development of this airport, a military base, is in limbo following the cancellation of the project award in 2019 and the announcement of a rebidding procedure in 2021 (detailed information on the progression of projects such as this can be accessed by clicking on the ‘Show’ button in the database).

There is a great deal of capex also on new airport construction projects in Asia Pacific.

Again, the top 10 projects are show in the table below, taken directly from the database.

The Long Thanh project in Vietnam is the world’s most expensive greenfield airport. 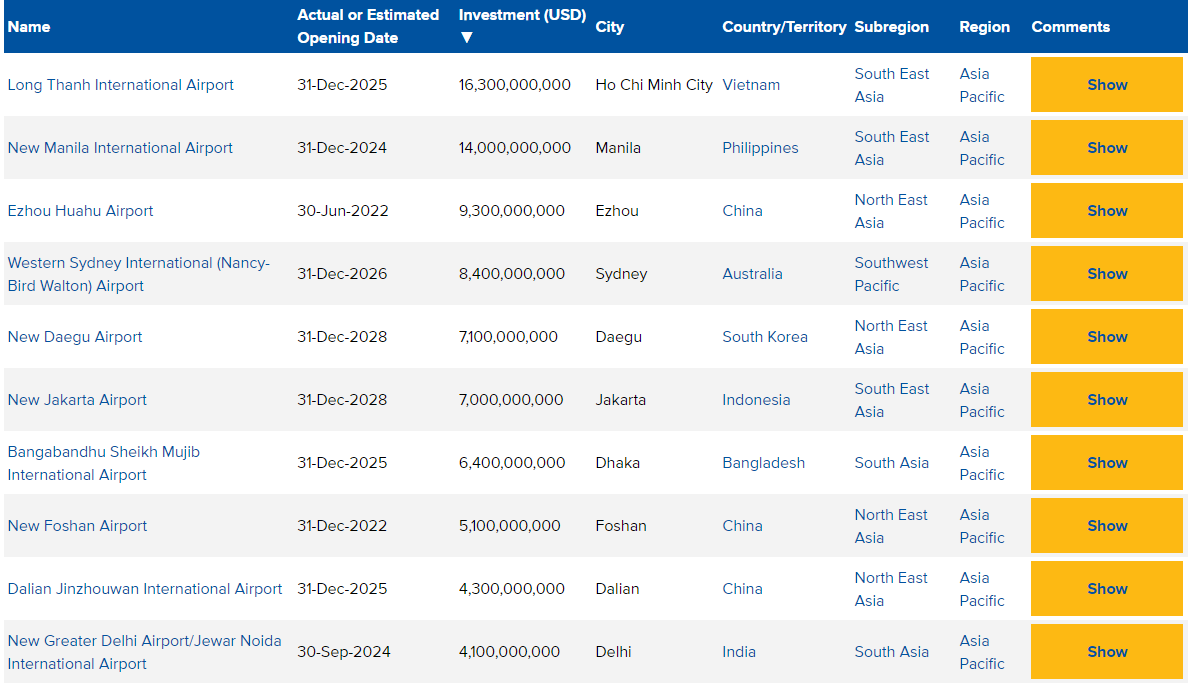 With three new airports in the table China is again well represented, while the New Greater Delhi Airport construction has finally got under way.

The new airport in Western Sydney is one of few examples in Oceania.

The New Manila International Airport has been subject to similar degrees of uncertainty at the Sangley Point Airport, mentioned earlier (as things stand there would be three major airports for Manila where there had been one, plus the Clark Airport to the north of the capital), but it is progressing.

Again, in all cases, full details are revealed by way of the ‘Show’ button.

177 projects at existing European airports; table is dominated by three (LHR, CDG and FRA) of the ‘Big Four’

Turning now to Europe, the continent has long been regarded as one where airport construction did not keep up with demand in the years up to the beginning of the coronavirus pandemic (in tandem with inefficient airspace control), prompting the risk of capacity crunches, severe travel delays and even claims that passengers would be unable to fly their origin and destination at all on their preferred day.

There are currently 177 known infrastructure projects at European airports, with a collective investment value of USD109 billion. 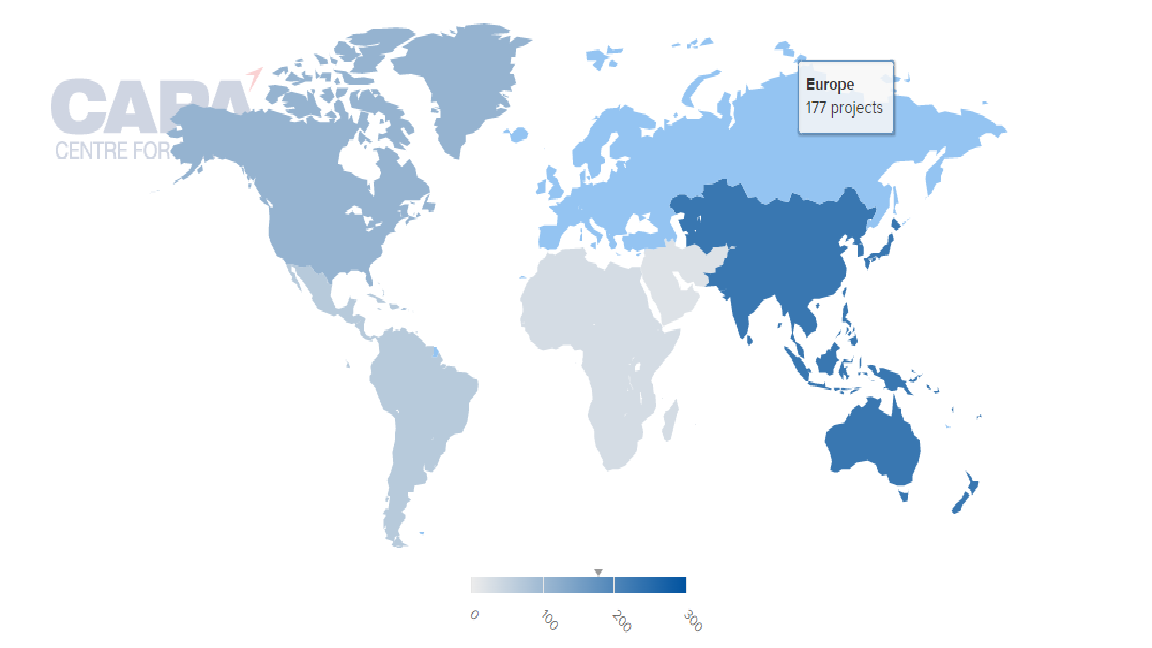 The European table for the top 10 projects as measured by the investment level is led by three of the four busiest airports in ‘normal’ times – London Heathrow, Paris Charles de Gaulle and Frankfurt. Heathrow’s USD22.8 billion expenditure through to 2028 – as it stood before the pandemic – is the highest committed amount in the world (* see below).

The airport that is missing from the table is Amsterdam Schiphol (it is actually 12th on the list, with USD2 billion committed through to 2025).

The management at Schiphol has to cater for Lelystad Airport, which should have been open to commercial flights by now, the potential expansion of Schiphol towards the North Sea, and environmental opposition (which never goes away). 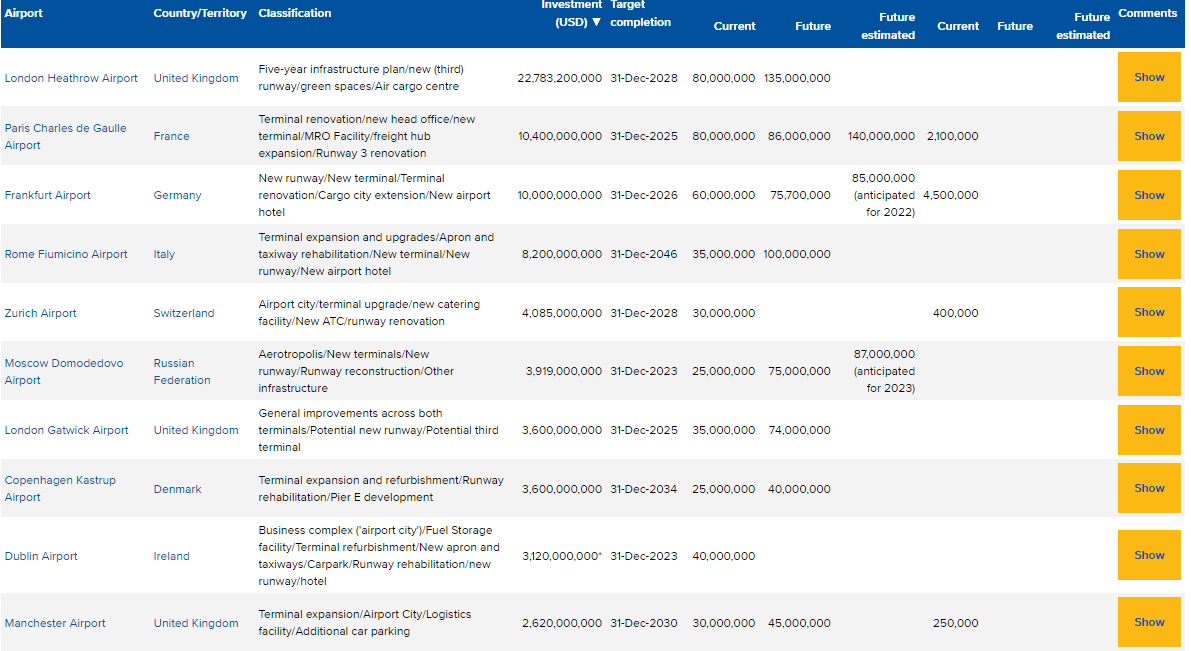 The current investment level of USD8 billion to 2045 has been successively scaled down from USD13 billion when it was first announced in 2014, at which time the intention was to grow Fiumicino to 100 million passengers per annum by 2044, when Aeroporti di Roma’s concession contract ends.

Finally, the situation regarding the provision of new airports in Europe is that there are 27 known projects, valued at USD11.3 billion.

Eight of the Top 10 are in the eastern part of the continent, which is responsible for 22 of the 27 projects in total. 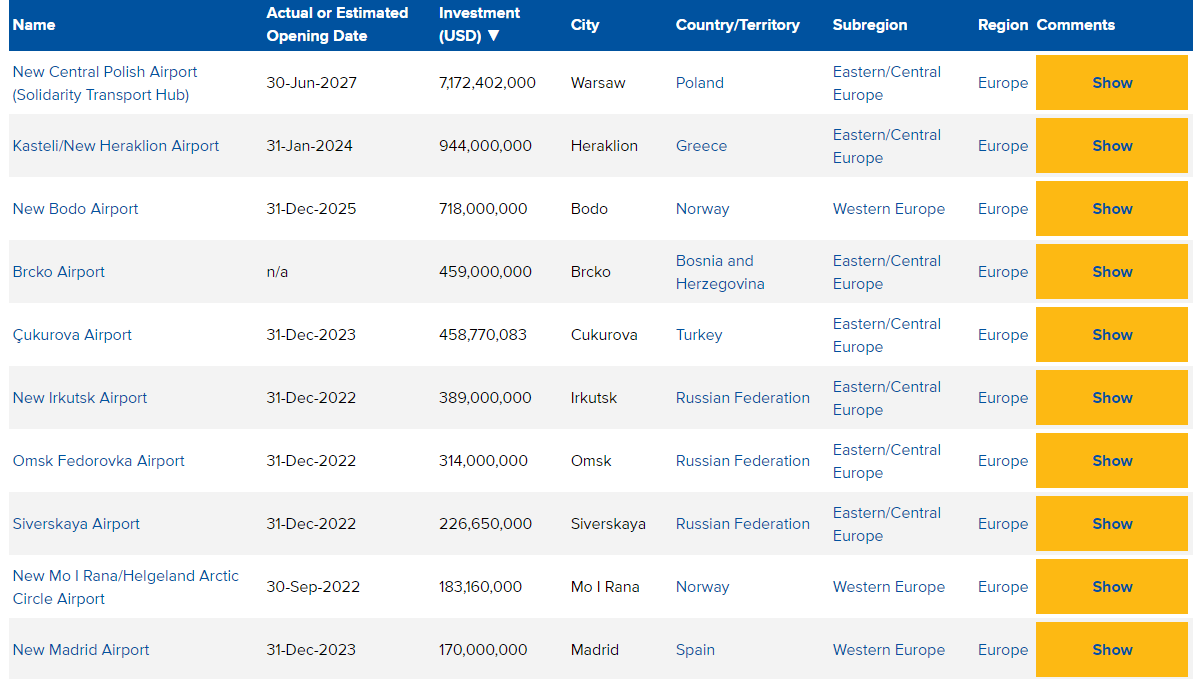 Leading the field is the New Central Polish Airport, which is expected to be completed in 2027 and should be connected by high speed rail from Warsaw and other major cities, making it the first ‘purpose built’ greenfield national gateway airport in Europe that is not related specifically to the capital or other important city.

The current valuation of the project stands at USD7.1 billion. In the long term it could become a model for the way that new national-level airports are constructed and connected to regions with a high concentration of population.

There are three new airports that were scheduled to be completed in the Russian Federation in 2022 – a timescale that could suffer from the imposition of sanctions on Russia.

Interestingly, there are two new airports scheduled for completion in Norway in 2022 (Mo I Rana) and 2025 (Bodø) respectively. Norway is a country of only five million people and it is committed at the highest level to the application of environmental principles in aviation.

However, surface transport is often inadequate in harsh terrain that involves the frequent crossing of water, and the provision of new airport infrastructure is an imperative.

The Bodø airport is in abeyance for the time being as the national airport’s operator Avinor has postponed a decision on its construction until 2023.

Little progress made on a second airport for Madrid

The ‘New Madrid Airport’ is a project that is also on hold.

Madrid is one of the few European capital cities of big countries to have only one airport servicing it, and there are private enterprises that would like to remedy that situation.

Building a greenfield airport at Ciudad Real, over 100km south of Madrid, proved not to be the answer. This project is one of two proposals and the one with the greatest traction. Even so, little has been heard of the project in the past three years, but there is still a live website for it.

NOTES: *Apart from the Al Maktoum/Dubai World Central Airport (see the second part of this article), which has been scaled down considerably.

The second part of this report will deal with the Americas, the Middle East and Africa.