Airlines turning back to fuel surcharges

As oil rose briefly above USD80 per barrel this week, airlines are again considering their fares and fuel surcharges, to take some of the sting out of the increasing costs. While fuel costs in 1H2009 were as much as 50% lower year-on-year for many airlines, the USD10 increase in fuel prices since late Sep-2009 has raised the spectre that fuel costs could again spiral out of control, as speculators bet on a global economic recovery.

All Nippon Airways (ANA) applied last week to Japan's Ministry of Land Infrastructure, Transport and Tourism to continue its fuel surcharge on international services after 01-Dec-2009. ANA’s fuel surcharges are fixed for a two-month period, and were last set on 01-Oct-2009, putting a surcharge of up to JYP7,000 (USD69) per sector on international services. Japan Airlines added a similar surcharge at the same time, with surcharges of up to JYP10,000 (USD98) (for operations to Brazil).

ANA and JAL had abandoned international fuel surcharges in Jul-2009, after the average price for jet fuel on the Singapore exchange stayed below USD60 per barrel for two consecutive months, and the carriers had planned to abolish all fuel surcharges effective 01-Feb-2010. Since mid Jul-2009, oil prices have gained almost USD20 per barrel.

In the US, United Airlines, Continental Airlines and Delta Air Lines announced USD10 “fuel surcharges” for 29-Nov-2009 (the day after Thanksgiving) and 02-Feb-2010 and 03-Feb-2010. Continental also extended the charges to the Easter and US ‘Spring Break’ period.

But strong competitive conditions and still fragile demand in many aviation markets around the world will limit the ability of airlines to counter rising fuel prices with higher fares/surcharges. 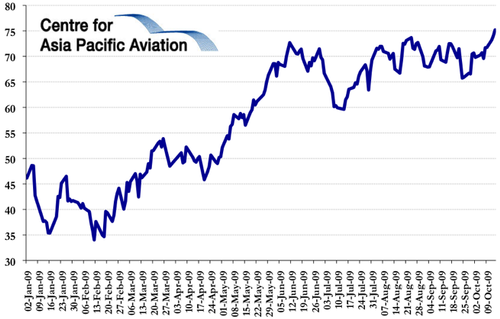 Jet fuel prices rose much in line with the price of oil, with only Singapore yet to cross the USD2 per barrel mark. Jet fuel prices had not been above this level since mid-Nov-2008.

New York Harbour and US Gulf Cost prices rose 5.9% and 5.6% respectively, while Los Angeles prices were also up by 5.6%. Amsterdam-Rotterdam-Antwerp exchange prices rose 5.8% while Singapore prices rose 6.3% to close Tuesday at USD1.99 cents per gallon, after only increasing 2.7% last week. 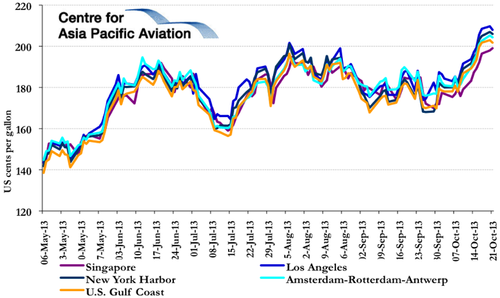