IATA reported that international scheduled traffic “continued to strengthen” in Jul-2010, with global passenger traffic now 3% higher than the pre-crisis levels of early 2008. It prompted Director General, Giovanni Bisignani, to comment that the recovery in demand has been "faster than anticipated."

Mr Bisignani however noted that the pace of recovery "will likely slow" towards the end of the year, as recovery enters a “slower phase”, commenting: “The jobless economic recovery is keeping consumer confidence fragile, particularly in North America and Europe. This is affecting leisure markets and cargo traffic. Following the boost of cargo demand from inventory re-stocking, further growth will be largely determined by consumer spending which remains weak”.

IATA noted that the apparent slowdown was “entirely due to the fact that by July 2009 traffic was already starting to recover” (although the growth was still off a negative base in Jul-2009). After adjusting for seasonality, the improvement in demand was faster month-to-month in Jul-2010 than it was in Jun-2010, according to IATA. 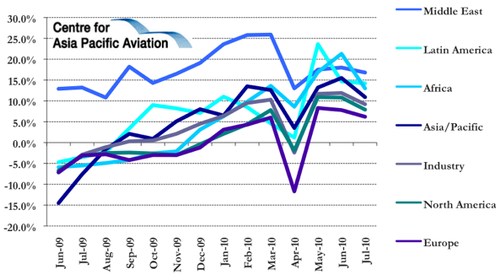 During the month, traffic (RPKs) growth occurred at a fastest rate than capacity (ASKs) growth of 6.1%, although this was again the strongest of capacity growth in over 12 months, coming off a capacity reduction in Jul-2009. 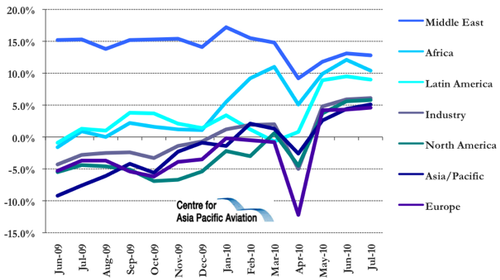 The gap between traffic and capacity growth pushed up the international passenger load factor to historic highs of 82.9%. 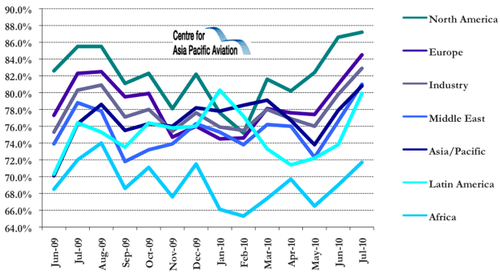 Cargo demand has also rebounded with Jul-2010 global cargo demand 4% higher than pre-crisis levels in early 2008, with industry-wide freight growth of 22.7% in the month. However, IATA predicts a slowdown in air freight markets is expected in the second half as the economic cycle “moves into a new phase”.

This follows “extraordinary” freight growth rates in late 2009 and early 2010, “supported by businesses re-stocking their inventories”. IATA continued:  “With the re-stocking cycle completed, air freight demand will be driven by consumer spending and business capital expenditure”, adding: “Weak consumer confidence in Europe and North America will be a negative factor. But strengthening corporate profits are supporting an increase in capital expenditure that could continue to drive robust freight growth”.

IATA also noted that the two-speed recovery continues to see weak growth by European carriers of 12.1% in Jul-2010, less than half the 25.3% increase by Asia Pacific carriers or the 27.1% growth recorded by North American carriers. 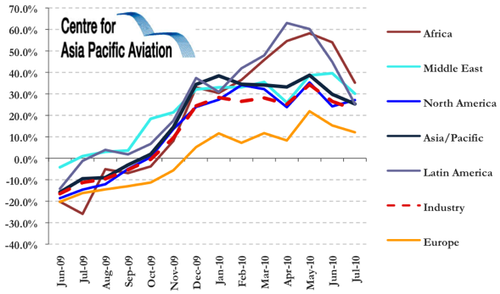 Mr Bisignani also stressed the need for a “change in the industry’s structure” and an easing of the regulatory structure governing airlines, to facility consolidation across political borders.

He commented: “The crisis has seen consolidation in Europe and the US. This month’s merger announcement by LAN and TAM brings Latin America into the picture. And trans-national brands are serving customers effectively in many parts of the world. But we remain an industry of over a thousand players with only very limited opportunities to consolidate as a result of the antiquated bilateral system’s restrictions on ownership. The business realities of the industry are changing. It is critical that governments find a modern regulatory structure that is free of outdated ownership restrictions and able to facilitate opportunities for consolidation globally—something that other industries take for granted”.

Mr Bisignani also noted the heavy presence of labour disputes in 2010, commenting:  “Costs are a critical element. This year has been marked by strikes and threats of strikes at airlines, and with airports and air navigation service providers. Avoiding strikes at BAA and AENA, Spain’s provider of air navigation services, were major accomplishments. We are all in this together—including all our partners in the value chain and those who work in this financially fragile industry. It is not the time for strikes. We must work together to secure our future by finding solutions to reduce costs”.

Cautiously optimistic but expects some “slowing” in months ahead

While the traffic results represent a marked improvement from 2009 levels, IATA noted that “improving demand is an important component of the recovery” adding that it “must translate to the bottom line”.

IATA continued that the anticipated 2010 profit of USD2.5 billion is “only a 0.5% return on revenues”, adding that the “financial situation of the industry remains fragile”. Mr Bisignani also stressed that the industry “must go beyond recovery to secure sustainable profitability at levels exceeding the 7-8% cost of capital”.