China’s airlines are settling into a changed market from Shenzhen and Guangzhou to Xiamen in southern China, where a high-speed 200 km/h rail line (HSR) opened on 28-Dec-2013 and reduced travel time between Shenzhen and Xiamen from 11 hours to three hours and 50 minutes. What was once a journey where air had a distinct advantage is now a trip where air has only a minor advantage.

Unsurprisingly, flights from Shenzhen to Xiamen have been cut, by a third, with 53 weekly flights decreasing to around 35.

Flights from Guangzhou to Xiamen have dipped 12% from 91 a week to approximately 80. (Fare information is unavailable, which could show discounting to better compete with rail.) The changes are real, but their relative impact in the wider scheme of things is very small: China in Jun-2014 had approximately 31,000 weekly domestic round-trips. Taking a few dozen flights out is a rounding error, although more realistically the slots and airspace can be used to open new routes.

Guangzhou/Shenzhen to Xiamen are not trunk routes

Guangzhou-Xiamen was the 50th largest domestic route in 2013 ranked on seat capacity, according to OAG. Shenzhen-Xiamen saw approximately 15,000 weekly return seats and was the 137th largest route.

The Shenzhen-Xiamen high-speed rail line opened on 28-Dec-2013, introducing 250km/h trains (slower than other 300 km/h lines in China) from Shenzhen to Xiamen. That cut the 514km journey from 11 hours to three hours and 50 minutes.

Xiamen is the only major stop along the route, so this analysis focuses on traffic impacts from the Pearl River Delta (PRD) to Xiamen. Although Guangzhou is a not an insignificant distance from Shenzhen, it is included in this analysis because much of the population around the PRD lives outside the cities. So a prospective passenger around Guangzhou may in the past have gone to Guangzhou Airport but now could travel slightly further to Shenzhen’s railway station to access cheaper and more numerous services to Xiamen via rail.

The same can be true in reverse: Xiamen passengers may be living far outside Xiamen, and in the past would have to fly to Xiamen and then take a car journey; now with high-speed rail they can reach their destination more directly.

Hong Kong, also part of the PRD, is excluded in this analysis as journeys from Hong Kong to Xiamen via Shenzhen are too convoluted to be practical for most. This however will change as Hong Kong receives an express train link to mainland China.

Already airlines are forgoing Hong Kong-south China route opportunities as they will likely be impacted – or made redundant – by high-speed rail later in the decade. From Xiamen, connections are available to Fuzhou and onwards to Shanghai, but again the length and complicated nature of this journey does not warrant a survey of the potential impact.

Shenzhen-Xiamen flights have decreased by one third

This in some ways is different from prior experiences with high-speed rail where airlines boost frequencies prior to the introduction of high-speed rail in the hope of making a higher-frequency service more attractive. 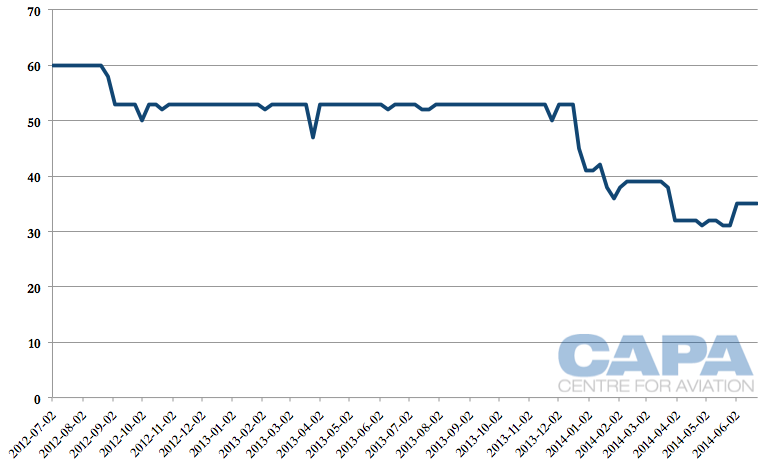 Guangzhou-Xiamen flights have decreased by 12%

In northern summer 2013, Guangzhou-Xiamen typically saw 91 weekly round-trips offering approximately 13,000 seats. This has dropped to approximately 80 weekly round-trip flights (down 12%) across 11,300 seats (down 13%). The similar figures once again indicate airlines are not seeking to preserve frequency by moving to smaller-capacity aircraft.

However, this was not a reasonable option. Already airlines were primarily flying Airbus and Boeing narrowbodies (unlike widebodies on trunks routes) and regional jets are rare in China, limiting their potential deployment. 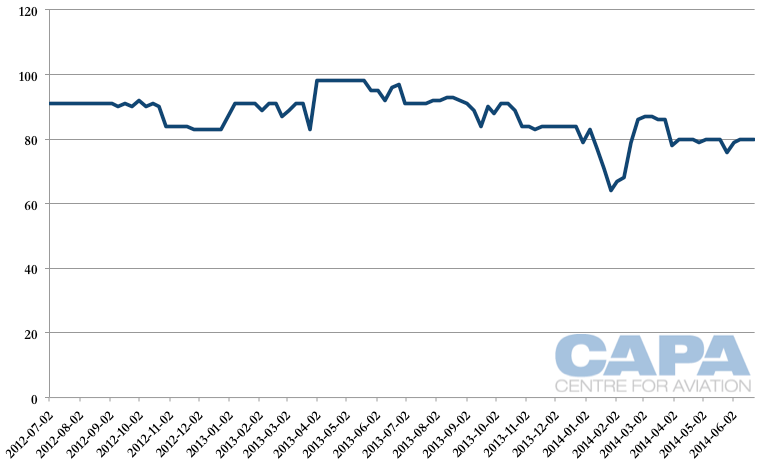 The relationship between air and rail in China is complex. On the one hand, airlines resent what was likely un-coordinated over-growth of high-speed rail.

The railway company was ambitious and often an entity unto itself; it has since been reformed following a restructuring that has seen top officials removed and in some cases placed before courts for corruption. There is benefit to the public from high-speed rail, but it remains unclear if this outweighs the large and unquantified infrastructure cost. Tickets are cheap – unrelated to fully allocated costs, so prices may eventually need to be increased to pay off debt.

The opportunities are numerous but so too are the challenges. Airlines have had to work with the usually bureaucratic provincial division of each railway bureau; a single central partnership has not been possible. Further, air-rail cooperation has taken a back seat to internal railway reform.

There will inevitably be stops and starts. Europe has advanced air-rail cooperation but by no means has it mastered the opportunities. In Japan, air-rail cooperation is mainly taking the form of marketing and limited discounts, and even then is being promoted by LCCs. New entrants have limited establishment and working capital so seeking partners makes sense, as Spring Airlines is doing.

It can be guaranteed that there will be further air route reductions as high-speed rail grows. Brakes may well be applied to high-speed rail if construction is reduced, ticket prices increased or train speeds slowed.

Until there is a seismic leap in train speed – not likely until the middle or latter part of the century at the earliest – reports of aviation’s death in China will continue to be exaggerated. There will certainly be challenges, but also opportunities for those that chose to seize them. What remains key is agility in an ever-changing Chinese domestic market.