Airlines lose six years of premium travel growth – IATA. Will it ever come back?

The international airline industry lost six years of premium travel growth in the global financial crisis, according to new research from IATA. The lifeblood of the network airline industry, the extent to which this growth can be recovered is a very hot topic. “The question”, stated IATA, “is to what extent the lost growth is a structural shift or a cyclical fluctuation,” adding, “without further econometric analysis, we cannot give a conclusive answer to this”.

The industry body cited evidence showing a “significant cyclical element” in the 2008-09 premium travel collapse. IATA noted that world trade has picked up significantly since May-2009, to a similar extent as premium travel. The airline body observed, “not all those buying premium seats are on export business, but growth in the imports and exports of developed economies has moved by a very similar extent to premium travel”. 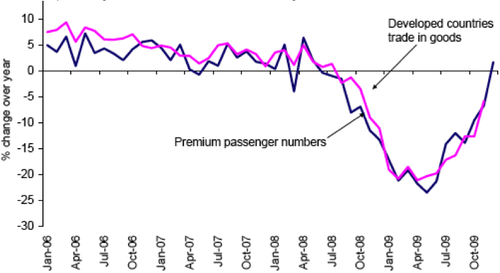 But IATA also noted, “it also looks as though the factors driving business travel are increasingly important for driving the number of passengers sitting on economy seats, as well as premium”, adding, “in the recent period of upturn, economy travel has continued to turn up, despite the improvement in consumer confidence levelling off”.

The industry body concluded, “we think it reasonable to assume that changes in the number of economy as well as premium seat sales are being driven to a larger extent by business travel rather than leisure” – ie a structural shift.

IATA Chief Economist, Brian Pearce, stated, “the decline in premium and business travel numbers may have been cyclical (and we did see a similar 25% fall in 2001 and a larger 35% decline in 2003), but it is revenue that matters for an airline, and there are more grounds for thinking that there may have been a structural decline in yields from premium seats…Business travellers increasingly [using] economy seats would certainly be one significant downward pressure on yields from seats at the front of the aircraft”.

Strong increase in premium demand since May-2009 trough

May-2009 marked the low point for premium travel, according to IATA, when numbers were 25% down on early 2008 levels. Although there has been an 11% upturn since then, premium travel remained 17% below that previous 2008 high by Dec-2009. 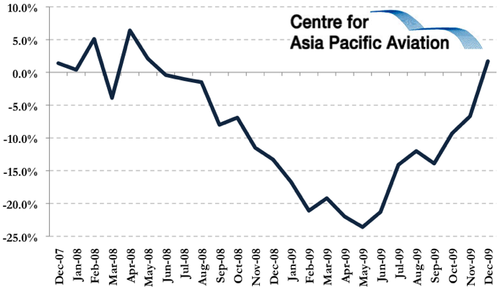 There was a “strong end of the year for premium travel”, according to IATA, with a rise from November to December of just under 3% (seasonally adjusted).

IATA stated, “since its low point in May premium travel numbers have been volatile month-to-month but have been growing an average annualised rate of over 10% i.e. at twice the pace of trend growth…[But] with six years of lost growth, there is still a very long way to go despite the strong upturn seen since last May”.

Middle East carriers have continued to benefit from recent market share gains, accounting for greater than 12% of total premium traveler numbers for the first time in Dec-2009, although their share of worldwide international premium revenues is about one percentage point lower. 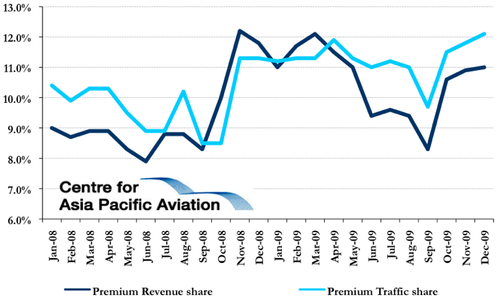