Airlines in Transition part 2: Where are smaller airlines in the new partnership world?

In our first article based on CAPA’s recent Airlines in Transition conference, we looked at the evolution of airline alliances. In general, this theme is relevant only to the larger carriers with significant long-haul networks, but 86% of the airlines in CAPA’s database are not full members of a branded global alliance (BGA). In this second report from the conference, we ask where this leaves smaller and non-aligned airlines?

There are a number of benefits and issues that alliance members associate with their membership of a BGA. However, CAPA’s panel of smaller and non-aligned carriers believe that they can address these factors better and more flexibly by remaining outside the BGAs. These issues are mainly connected to expanding and securing the available revenue pool through wider access to markets, brand loyalty and distribution.

Bilateral approach preferred to the costs of BGAs

By definition, the non-aligned carriers do not believe (or have not yet been able to secure membership) in BGAs as a way to achieve these benefits. There are costs associated with alliance membership and, for some, the benefits do not justify these costs.

However, this does not necessarily mean that smaller carriers do not believe in partnerships at all, rather that they generally prefer to approach them on a bilateral basis. This gives them the freedom to choose partners on the basis of what suits them and to do so without creating too high a dependency on any partner.

For Cathal O’Connell, CEO of bmi regional, this latter point is key. Previously part of the Lufthansa-owned bmi group within the Star Alliance, bmi regional is reviewing all its partnerships and has ceased some routes where it felt that it was too dependent on a partner.

There are very few regional airlines with sub-70 seat aircraft (bmi regional operates Embraer ERJ-135s and ERJ-145s) that have neither an ownership relationship nor an alliance relationship with one of the major groups in Europe. This necessitates a presence in strong point-to-point markets, but also in markets where there is feed. Mr O’Connell stresses the importance for bmi regional to establish its independence, while maintaining/re-building partnerships on a bilateral basis that help it to carve out its own niche and which suit its network, fleet and size.

For many carriers, a clear geographical niche is the key factor in establishing a solid revenue base, although partnerships can provide another layer of income on top of this. Antonio Menezes, CEO of Azores-based carrier SATA, notes the importance of deploying his assets in niches which do not attract significant competition. SATA’s niches are internal routes within the Azores, a group of islands in the Atlantic, and on the Azores to North America. The group faces a much higher level of LCC competition on its European routes. SATA deploys turboprops (Bombardier Dash 8s), narrowbody jets (Airbus A320) and widebody jets (Airbus A310) to serve its varying route network.

Members of the BGAs commented during the first session of CAPA’s Airlines in Transition conference that alliances do not guarantee success. Echoing these comments, Jochen Schnadt, commercial director at UK leisure carrier Monarch Airlines, observes that “partnerships are important, but can’t save a failing business”. For him, the question to pose is “to what extent can partnerships be used to de-risk your own business”. Partnerships matter to Monarch because they help it to drive a healthy load factor (it achieved a scheduled seat load factor of 88.8% in FY2012) and Mr Schnadt summarises the key factors in choosing a partner as being “geography and real estate”. 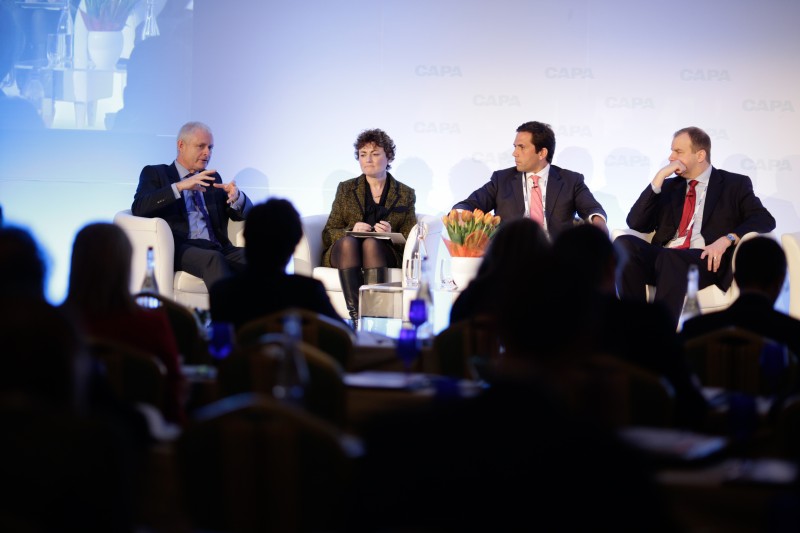 easyJet does not do partnerships

By contrast with the other panellists, easyJet does not do airline partnerships. Its route network is based on a purely point-to-point approach and it does not even partner with itself, in that it does not offer transfer ticketing.

easyJet group commercial director Catherine Lynn points out that it is easy to self-connect on its network and the carrier would not alter its schedules to facilitate this, adding that “the LCC model often allows direct routes where previously you had to connect to make them possible”. Its focus will remain point-to-point and this is facilitated by having bases across Europe that allow “crew and aircraft to sleep in the same place”.

Smaller and non-aligned airlines take different approaches to brand loyalty. Many, but not all, have their own frequent flyer programme (FFP), while some opt for other forms of loyalty programme that require a third party partner (perhaps involving a retailer, for example).

easyJet’s Catherine Lynn says that corporate travellers like FFPs, but the growth in the industry is mainly in the leisure segment, where points are less valued. While 80% of easyJet passengers are leisure travellers, 65% of its routes are city-to-city, so business travellers are well served by its network. Ms Lynn argues that FFPs add cost and complexity, which is why easyJet has no plans to introduce one.

easyJet does have reward schemes with loyalty programme partner Nectar and Emirates Airlines. The Nectar scheme rewards passengers with easyJet flights for spending with other Nectar partners, while the Emirates partnership allows its Skywards FFP members to redeem their points for easyJet flights. It also has the easyJet Plus card, which gives members seat choice, speedy boarding, fast luggage drop and member offers for an annual payment of GBP149.

For bmi regional’s Mr O’Connell, a loyalty programme needs a lot of thinking: “An independent one might not be so effective”. In his view, a better way to compete is to offer direct services with the schedule and frequency that passengers want.

SATA does have its own FFP, but Mr Menezes concedes that, given 80% of his passengers are not based in the Azores, its value is limited. Nevertheless, he believes that it is key to customer relationship management as an important communication channel. While some carriers have sold the frequent flyer programmes in recent years, Mr Menezes would not want to lose strategic control over SATA’s FFP.

Monarch Airlines does not have a FFP, but it does see value in other forms of loyalty scheme and has an important partner in UK supermarket retailer Tesco. Its passenger profile is very leisure-oriented and the most important factor for this segment is the airfare. As Mr Schnadt points out, "you need a frequent flyer to have value in a frequent flyer programme".

Distribution: 'Technology and e-commerce are critical to small carriers'

For airlines with niche brands and small home markets that do not benefit from membership of a BGA, it is crucial to maximise opportunities to place their product in front of the consumer in ways that work most effectively for them. Distribution channels are therefore a critical factor, involving decisions about the right mix between GDS/travel agents/own website and the use of mobile devices.

bmi regional is investing in its own channel since web sales account for only around 20% of its business currently, but it continues to see GDS as a critical channel for business markets. Direct corporate relationships are the third strand. According to Mr O’Connell, this also means that smaller carriers have to deliver on technology, a point with which Mr Menezes agrees: “Technology and e-commerce are critical to small carriers. Small does not mean less sophisticated on IT”. For SATA, GDS is also important, but direct channels are a vital tool in promoting the carrier’s destinations.

For easyJet, which reached 98% on-line sales levels some years ago, when its inventory was not available through GDS, the more traditional channels are now providing access to new markets such as the higher yielding business passenger. Ms Lynn notes, however, that the GDS providers are still learning about easyJet’s needs and the LCC has not changed its business model to suit the GDS.

Of course, a key difference between easyJet and most carriers that are not part of a global alliance is that easyJet is not small. It offers 1.4 million weekly seats, compared with an average of 600,000 for BGA members and 150,000 for all airlines (based on CAPA and Innovata data for the week commencing 15-Apr-2013). This positions it relatively well to approach the GDS in the way that suits it best. 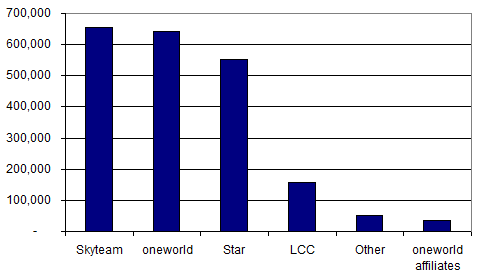 Unbundling: pejorative or just giving passengers what they want?

A related issue is the way in which the product is packaged and sold, raising the question of price bundling versus unbundling. Typically, the rule of thumb has been that the LCC model delivers an unbundled product, while FSCs bundle. These distinctions have become blurred, but CAPA’s panel broadly preserved them.

bmi regional, as a full-service carrier, does not unbundle, preferring to offer what Mr O’Connell calls “hassle-free travel”. He also points out that the GDS is not a good channel for offering ancillaries or unbundled pricing. Again, SATA’s Mr Menezes is in agreement: “We are a full-service carrier in a conservative part of the world, Catholic Portugal. Unbundling has a pejorative meaning.”

By contrast, according to Ms Lynn, a core easyJet principal is that passengers want to choose what to buy and unbundling allows better revenue management. Nevertheless, she points out that easyJet’s flexible fare is a form of bundling as it offers re-booking flexibility all in one price.

*including oneworld affiliates
Source: CAPA – Centre for Aviation and Innovata

With 86% of global airlines being small and non-aligned, they look set to remain an important segment for the foreseeable future. However, if they are to be sustainably profitable, they must continue to resolve questions of how to expand and secure their revenues without the backing of a BGA.