Airlines in Transition: Disruption! Preparing for the next - inevitable - shocks

Shocks and disruption are all too commonplace in the airline industry, which has been subject to disruptions of all kinds over many decades. These have included liberalisation, oil price shocks, terrorism, volcanoes, pandemics, the global financial crisis and competition from carriers with new business models (including low-cost carriers and the Gulf carriers). Some cannot be prepared for; but there are others where reading the signs of consumer patterns and technological advances will reward richly.

At CAPA's Airlines in Transition 2014 summit in Dublin, airline strategist and author Nawal Taneja led a panel discussion looking at the kinds of disruption that the industry faces in the future. Changing consumer behaviour, new industry players, new technology and new intermediaries are powerful forces that will necessitate fundamental change in the airline industry.

New forms of disruption on top of the old ones

In spite of the long history of shocks and disruption, the industry continues to exist and to grow. "Airlines have managed to evolve to deal with them, using traditional methods", says Mr Taneja". The use of more fuel efficient aircraft, re-designing airline networks, creating LCC subsidiaries and developing ancillary revenues are all examples of such methods. "But", says Mr Taneja, "shocks aren't going to go away. The same things will happen and more on top of them."

Mr Taneja describes four ways in which the airline industry will experience profound changes in addition to kinds of shocks experienced in the past. In his view, these new disruptions will necessitate the transformation of the industry. "The airline business will have to be conducted differently", he says, "They still fly planes, but need to do things differently".

First, says Mr Taneja, buyers are changing. Consumers are always on-line and connected and so have more information than ever before. Consumer behaviour is changing rapidly and their expectations are changing too. This change is different from previous disruptions, according to Mr Taneja.

Second, new and powerful players have entered the industry, such as the LCCs and the Gulf Three (which should be extended to included Turkish Airlines). In addition, the Chinese and Indian carriers will grow "at some point", predicts Mr Taneja. A related development is the advent of low-cost long-haul, which "90% of network carriers have discounted", in his view. "Some have failed, some have tried and are struggling, but it is going to happen".

Third, new technologies are having a huge impact, particularly in distribution and in terms of consumer behaviour. Mobile technology, social media, new payment systems, the 'internet of things', built-in technology in clothes are all examples of developments that will lead to significant change in the industry. Mr Taneja argues that this "makes everything transparent, changes behaviour and expectations".

He adds that "branding will be done by consumers" as, for example, social media enable the ranking of businesses. He predicts that consumer power will extend further. "Revenue management will be done by the passengers themselves", he says, so that passengers will have power over the choice of "what seat at what price and what time".

Fourth, there are what Mr Taneja describes as new "travel facilitators, distributors and intermediaries" entering the industry. These are generally technology-based organisations such as Google, Amazon, Facebook and Apple. Information-based, powered by analytics and backed by financial resources and marketing power, they enable semantic research.

This facilitates the ability to predict consumer behaviour based on the past, argues Mr Taneja, allowing them to advise on strategy. Consumer-facing businesses can then offer a "highly sophisticated, personalised service". This can be particularly powerful in tailoring solutions to individual travellers when some aspect of their journey goes wrong. For example, a passenger arriving just too late at a departure gate could immediately be given information on an alternative flight and associated pricing.

Aidan Brogan, CEO of travel distribution business Datalex, sees the consumer as the main influence in terms of disruptions to the airline industry. "They want choice and control", he says, "The challenge is the increased emphasis on return on capital employed [for airlines]. You need to let the consumer decide how they want to interact".

He argues that getting this right can be beneficial to all. "The consumer gets control, but airlines can get a revenue gain", he says. He cites as an example a project supplied by his company to WestJet for the creation of an on-line, dynamic seat map.

Mr Peters also sees significant change arising from the 'internet of things', where "everything is sensed", and the technology of proximity awareness, which "tells you where you are". In addition, new wearable technology products such as Google Glass, which has been used by Virgin Atlantic in its check-in process at London Heathrow, provide opportunities to improve customer interaction.

Fergal Kelly, VP product portfolio and merchandising at Travelport, likens the airline industry's current position at the dawn of major change to the introduction of the mass generation of electricity. He sees experimentation taking place in many areas of consumer interaction with the industry.

"The challenge and opportunity is the different consumer expectations of the experience delivery. They expect a level of efficiency, personalisation and access", says Mr Kelly. Echoing comments from some of the other panellists, that appear to signal an increase in buyer power, he observes that consumers "don't expect to have to work too hard or pay too much to get what they want". 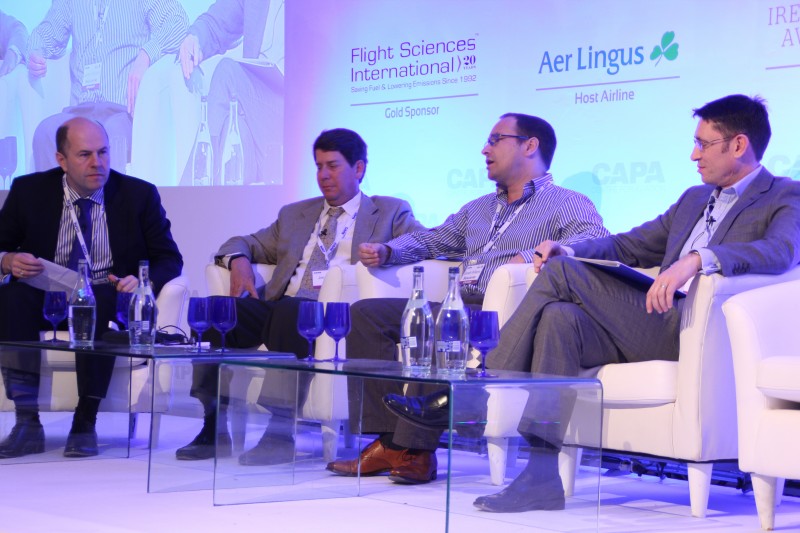 There are still challenges to overcome in delivering a consumer-focused service that gives the passenger control, for example in making changes to a booking. The technology is available, but, says Mr Brogan, industry standards are a constraint. "The industry wants to treat the ticket as a commodity for ease of distribution", he says. "Standards are good, but shouldn't stop personalisation".

Mr Kelly refers to the sheer quantity of data that it now available and argues that there is a need to strip away what does not add value. "People talk about the need for data and predictive analytics, but you need to look at the delivery of the service… You need good alignment between the value proposition and service delivery. There's still a long way to go", he says.

For Gareth Williams, CEO and co-founder of Skyscanner, a key aim for airlines, and other travel suppliers such as hotel companies, is to ensure that the booking takes place on their own website in order to minimise distribution costs and to maximise control of the customer interaction.

"Airlines should be able to make a choice about what they are offering the customer, in terms of price and ancillaries", says Mr Williams. Intermediaries such as Skyscanner can facilitate the process. "Searching doesn't have to be associated with booking".

In another example of the need for further progress, Mr Peters highlights the lack of coordination that can often be apparent between an airline's on-line interaction with its passengers and its telephone communications with them. Mr Taneja makes the observation that airline boards tend to make quick decisions about spending tens or hundreds of millions of dollars on aircraft, but often delay decisions about spending what are relatively small sums on IT.

This highlights a key challenge facing airlines adapting to the new era of customer interaction, which centres on information technology and its cost. As Mr Williams notes, "you have to turn [IT] into a business, not a cost-bound utility".

Mr Brogan takes this point further, arguing that focusing on the cost of technology is "totally missing the point". In his view, "it's about embracing the consumer." He has a warning for airlines that fail to understand this. "They misunderstand the value and integrity of the relationship", he says. "There has to be a change. Those that don't like change won't be here".

A sustainable source of new revenues, or just a precondition for survival?

While this is undoubtedly true – all businesses must embrace change and airlines need to go further in providing value to passengers in their interactions with them – the discussion does not address another fundamental question.

Can an industry with a long term history of relentlessly falling unit revenues in real terms generate sustainable revenue improvements from customer-oriented initiatives while the structure of the industry remains so fragmented? The first session of CAPA's Airlines in Transition 2014 conference discussed the restrictions on ownership and control that ensure that the industry's fragmented structure persists.

All the historical evidence suggests that airline passengers demand more, but want to pay less. The competitive dynamics in the industry are such that, on the whole, airlines have no choice but to comply.

It is vital for airlines to respond to the disruptions identified in the current discussion. However, it may be that adapting to new technology and consumer behaviour becomes a precondition for survival, rather than a sustainable source of new revenues and improved profitability.