Airlines and gamblers return to Las Vegas; others struggle

The world’s premier gambling cities and the airports that support them have taken a huge hit from something they could not have predicted for all their algorithms – the arrival and rapid spread of the coronavirus.

Las Vegas is one of several airports around the world where traffic figures are heavily influenced by gambling activities. Others include the competing Nevada resort city of Reno, Atlantic City in New Jersey, Monte Carlo (Monaco) on the Mediterranean Sea, and Macau in Southeast Asia, which is regarded as the world’s #1 gambling city.

But gamblers are a hardy bunch, and resort cities like Las Vegas are seeing an upturn in demand and capacity. This report looks at what is happening there and at other comparable cities/airports in the U.S., Europe and Asia.

Since the reopening of Las Vegas casino-resorts on 04-Jun-2020, sustained demand from tourists seeking to return to Southern Nevada has led airline partners at McCarran International Airport (LAS) to increase their flight schedules in the coming months.

Las Vegas is one of several airports around the world where traffic figures are heavily influenced by gambling activities. Others include the competing Nevada resort city of Reno, Atlantic City in New Jersey, Monte Carlo (Monaco) on the Mediterranean Sea, and Macau in Southeast Asia, which is regarded as the world’s #1 gambling city.

At the lowest point of travel during the pandemic there were only 110 scheduled aircraft arrivals at McCarran for a single day.

In May, the top 10 domestic airlines at LAS combined to average 145 scheduled arrivals per day. In June that total rose to nearly 200, and in July it will be in excess of 280 per day.

By August, scheduled daily air arrivals into Las Vegas are expected to increase to more than 330, from across the nation. Currently, 55 markets have daily, nonstop service into LAS.

According to CAPA data, the top 10 airlines presently, as measured by seat capacity (week commencing 29-Jun-2020), are as follows, led by Southwest Airlines: 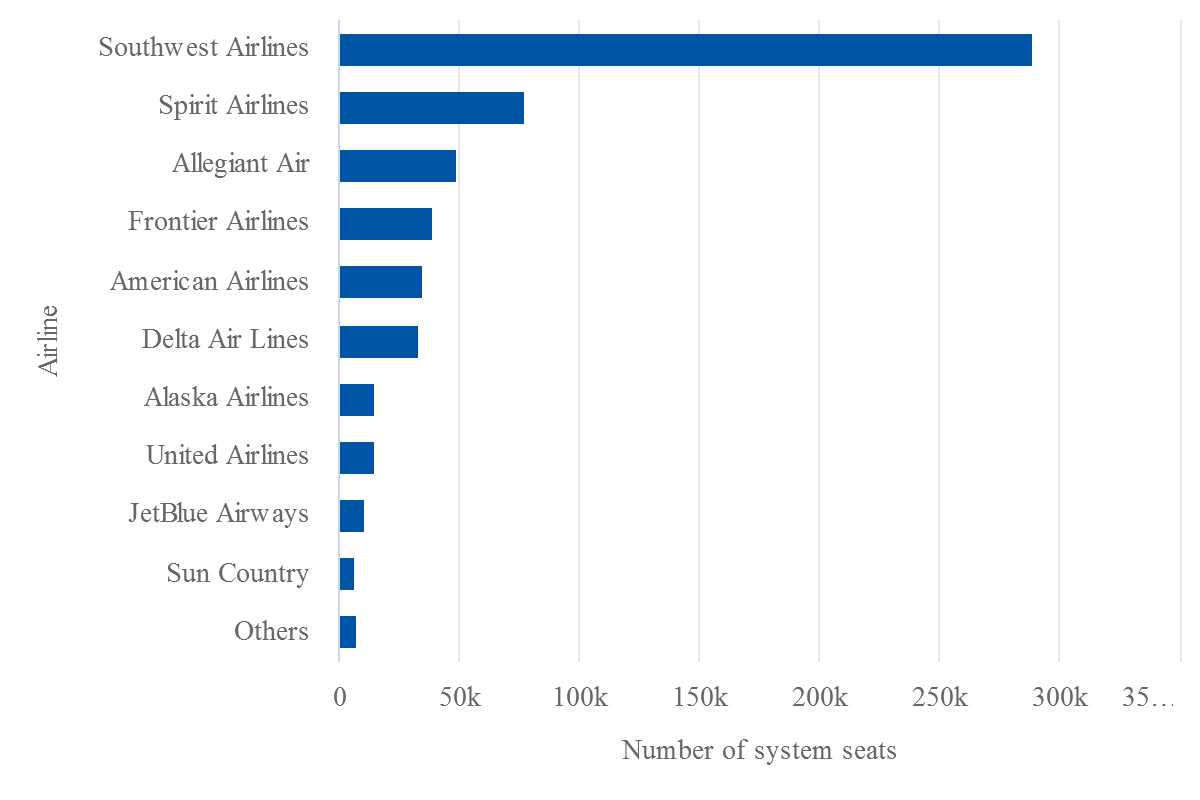 LCCs predominate – only to be expected

It is perhaps hardly surprising that the top four are low cost airlines, including two ULCCs.

Many people leaving Las Vegas – and especially the high rollers of Los Angeles who normally have seven airlines to choose from – will have insufficient funds to cover the cost of ordinary coach travel, let alone first class, in normal times; only the lucky ones.

The airport’s capacity recovery from its low point at the beginning of May-2020 is represented here. 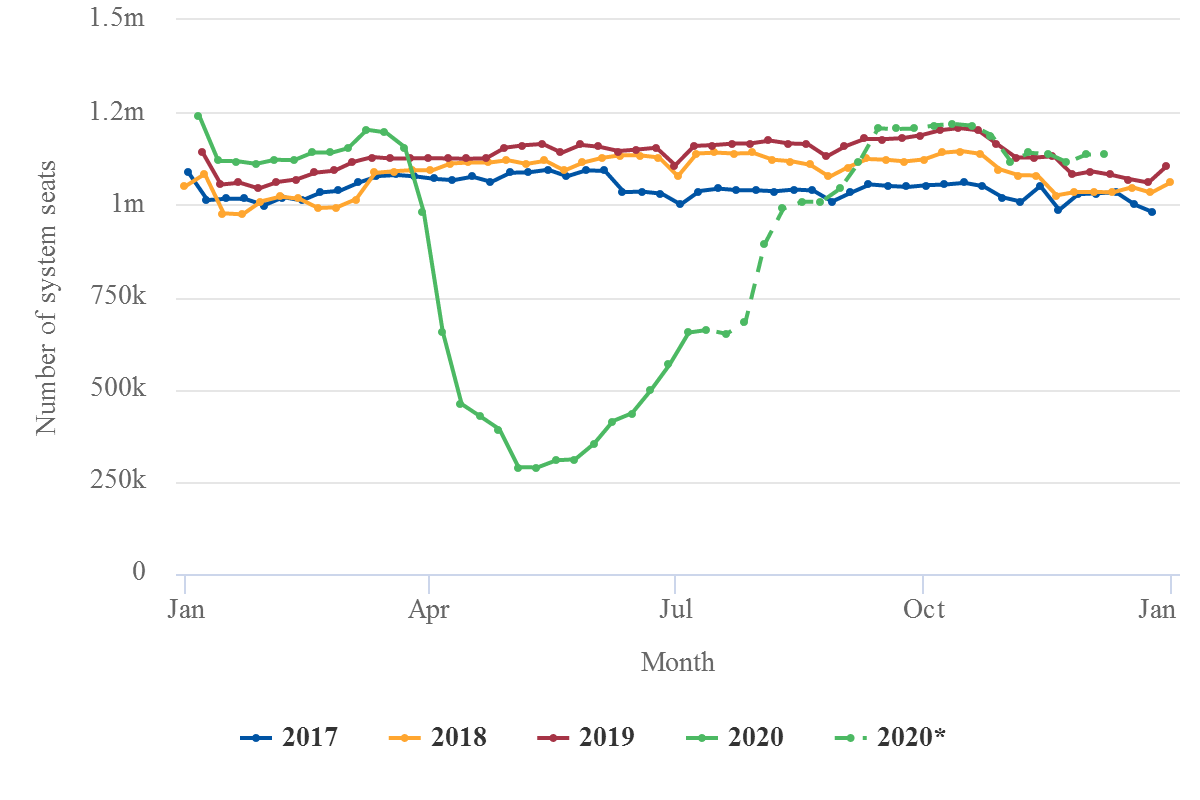 International services, and particularly trans Atlantic ones, are still conspicuous by their absence of course, and are normally responsible for large numbers of visitors.

The two UK airlines British Airways and Virgin Atlantic, for example, were the third and fourth busiest airlines at LAS after the Canadian LCCs WestJet and Air Canada Rouge (and Thomas Cook was the eighth busiest), but right now international seats make up only 1% of the total.

Before the end of July, properties accounting for 125,000 total local guest rooms are expected to be open.

Clark County’s Director of Aviation believes the confidence that airline partners have in travellers’ demand to return to Las Vegas is partly caused by the work being done to mitigate the spread of COVID-19 at the airport. From 26-Jun-2020 the state of Nevada has mandated the wearing of masks or face coverings that cover both the nose and mouth for all Nevadans and visitors when in a public space. Businesses have the right to ask any patron to leave if they are not following the directive.

Services restored and new services will start up

Southwest Airlines will operate the largest jump in summer service, averaging 156 daily arrivals in August compared to 87 in May.

Similarly, Delta Air Lines will increase from an average of 10 arrivals a day in May to 32 in August. Of these additional services, there are several notable trends and additions, including some new services:

There is no word yet on trans Atlantic services.

These increases account for both the restoration of services previously in place before the COVID-19 pandemic, as well as a few new routes being brought online. The return of long haul flights is a significant indicator of passengers’ renewed confidence in air travel.

Listed route availability and scheduling is subject to change.

It is useful to compare how other airports that are exposed to ‘gambling’ passenger traffic have fared recently.

Tougher for Reno and Atlantic City

Traffic at Reno-Tahoe Airport is down by 45% in the period Jan to May-2020 and is not recovering to its former position as quickly as its rival Las Vegas.

Atlantic City attracts gamblers from the New York conurbation, which was particularly hard hit by the virus. But since then capacity has picked up quite dramatically, to a level of 16,128 in week commencing 29-Jun-2020.

Moving on to Europe, the nearest international airport to Monaco, the European home of the high roller, is Nice Côte d'Azur, little more than 10km away, and the third busiest airport in France after the two in Paris that handle commercial flights.

Nice is far less reliant on this sort of traffic, being at the centre of a mainstream tourist region and also an industrial/commercial one. No passenger traffic data is available beyond the end of Feb-2020, but seat capacity there fell from 312,000 in the week commencing 09-Mar-2020 to a low of 14,864 in the week commencing 20-Apr-2020.

Finally, in Macau, the airport there was impacted by the virus earlier than the others and in 1Q2020 alone experienced a reduction in passenger traffic of 60%.

Las Vegas Airport leads the way in reopening - but for how long?

So, of this sample of affected casino destinations, LAS appears to be readapting faster than most of its peers, and especially faster than those in the U.S.

The recovery at Nice is a quick one now as well, but that is influenced by several factors that are more significant than gambling.

Macau, on the other hand, is founded on gambling; the statistics are not good, and the arrival of a ‘second virus wave’ in China will have nerves jangling more than any fall of the dice or bounce of a roulette wheel.

But, as the numbers of cases in the US quickly spike again, questions will be raised - especially among travellers themselves - on whether this momentum can (or should) be maintained.