Airline structural change in Europe: a major turning point – if labour allows it

"Short-haul premium will never recover. That part of the business has changed forever and we have to address it." British Airways CEO, Willie Walsh; 9-Feb-2010. Announcing British Airways’ response to moribund business travel within Europe, Mr Walsh outlined a plan which reflects the dilemma that now confronts all major European carriers – BA, Air France-KLM and Lufthansa in particular. The issues are basic, but apparently near-insoluble. With new restructuring attempts under way, the three majors are feeling their way through the mire, adopting broadly similar strategies. They really need low cost subsidiaries to help them, but only compromise measures are being proposed. Whether even these are successful will depend on how well managements can convince their labour unions to adopt the new realities.

Network airlines have relied for their livelihood on connecting long haul full service networks into European short haul links. To do this requires a broadly seamless service, where premium long haul traffic can transfer onto a similar short haul product.

But there is another, almost discrete, market: intra-European short haul point-to-point traffic. These two mutually cross-subsidise the connecting traffic, allowing the airlines to offer higher frequencies to a range of routes. This sector was the one initially targeted by the LCCs and it is now endangering the whole cross-section of the network airlines’

A good proportion of this used to be business travel, generating disproportionately larger returns, usually around 3-4:1 per pax more than discounted fares. Over recent years this traffic has decayed so that the mix favoured high volume-low yield discretionary traffic. But even with only a small number of business class (and fully flexible economy) fares sold, the differential of these premium fares gave the legacy airlines a big enough margin to paper over the fact of their higher costs.

New entrant airlines have been able to offer lower fares, using more aggressive pricing strategies, and leveraging off a much lower cost base. This had already forced average fares down right across the board.

For the network carriers, competing in this environment with their higher costs, their fragile hold on profitability depended on possessing the premium market.

In short, suddenly there is now a big divide between two separate segments in European short haul. The network/point-to-point cross-subsidy equation no longer adds up – unless the airline’s cost base is extremely low.

The solution to this dilemma is simple. Achieving it will not be.

A low cost, quality short haul airline subsidiary that can compete on (nearly) equal terms with the specialist LCCs would be the answer to the network airlines’ needs. Short of that, one workable option is the one Lufthansa already has in the US through its investment in JetBlue. JetBlue is a high value airline that has become a hybrid LCC, but retains much of its cost advantage. Transferring onto its services from international services onto short connecting flights is acceptable for pretty much all but demanding first class passengers.

But, within Europe that solution – for example by using alternatives like one of Lufthansa’s subsidiaries (such as BMI or Austrian etc) – immediately causes mainline pilots to become restive. So, at the root of each of the network carriers’ structural changes is an attempt – in one form or another – to emphasise a separate low(er) cost operation while remaining below the industrial radar.

But they cannot even contemplate creating a wholly separate greenfield LCC subsidiary, because the unions would shut their airline down. The result, for all of them, is a less than satisfactory compromise that might buy some more time. And, maybe with time…. yields will return. That is still a high risk strategy, given recent experience.

Massive structural change has occurred in the European aviation market over the past year. This has been provoked by the economic upheaval and the powerful customer preference for low cost travel. Eating into the market share of Europe’s network carriers, it reduces intra-Europe yields, resulting in unsustainable losses for the network carriers.

IATA reported airlines have lost six years of premium travel growth during the global financial crisis, and the European airlines suffered badly. Over the full year 2009 there was a 25% fall in intra-European premium travel, according to IATA. By Dec-2009, numbers were still 9.7% down on the previous year. Economy travel meanwhile dropped less in this market, falling 3.2% during the year as a whole and actually rising 1.9% year-on-year in Dec-2009. IATA described this as a "significant structural shift in business travellers from premium to economy seats on this short-medium haul market region”, which “accentuated the decline in premium travel and moderated the fall in economy".

With subdued forecasts for economic recovery in Europe and the shift away from premium seats for short-haul travel, the return of premium travel in the region is expected to be a “sub-trend for some time”.

This review looks at how some of Europe’s major airlines are reacting – along with the pressures this is generating through the system and within their own companies.

In the traditionally large premium markets, airlines are reacting to the irreversible changes in short-haul markets, with Aer Lingus, Air France, Alitalia, Austrian, bmi, British Airways, Iberia and Lufthansa, among others, announcing substantial adjustments to their products and strategies in recent weeks.

Mr Walsh has of course not been alone in bemoaning the loss of premium traffic. IATA CEO, Giovanni Bisignani, noted deterioration in demand and yields among Europe’s network carriers “partly reflects a loss of market share by network carriers on short-haul routes to low-cost carriers”.

Association for European Airlines (AEA) Chairman for 2009, Dr Ivan Misetic of Croatia Airlines, also saw these changes as being long term: “the dimensions of this downturn are unprecedented. In the past 35 years we have not seen such devastation of value. And we will not return to ‘normal’ again; the consumers are changing their expectations, and this will continue.”

He separately commented that the global economic crisis has “severe repercussions on all airline business models”, adding, “passenger volumes are in steep decline and the airfreight market has suffered what can only be described as collapse”.

While decreases in traffic volumes have been unprecedented, the greatest concern continues to be the “dramatic decrease in average fare levels, as premium traffic was particularly affected”, according to Dr Misetic.

“Not a cyclical feature….It is a structural upheaval, and we must adapt structurally”

He added that the trends are “not a cyclical feature in an industry which is used to business cycles. It is a structural upheaval, and we must adapt structurally”, adding that the “current crisis can be a catalyst for change”.

Dr Misetic also stressed the need for change within the industry, in order for relevance to be maintained, stating that “airlines, which are of paramount importance for European jobs and competitiveness, will only be sustainably competitive if they offer customers choice, remain environmentally sensitive and can be confident that the other elements in their value chain are equally market-driven and focused on the prosperity of the sector as a whole”. These are tall orders and the talk of “upheaval” is clearly not misplaced.

The AEA, representing 33 European established scheduled network carriers, in 2009 shed 20 million passengers compared with an already weak 2008; RPKs were down 4.5% and the passenger headcount fell an even larger 5.8% (reflecting most carriers’ greater reliance on longer haul operations as they cut back on intra-European services. Secretary General, Ulrich Schulte-Strathaus, commented, “the stark reality of the figures tells us what we know already – our sector has just come through an astonishing year. The crisis has not receded – its repercussions will be felt well into the future, and in some respects the face of the industry will be changed fundamentally”.

He had previously attributed much of the bottom line damage to the drop off in premium sales: “The real damage has been inflicted by the collapse in revenues, to which falling ticket prices, particularly in the premium-travel segment, have contributed far more than depressed traffic levels”.

However, Mr Schulte-Strathaus continues to reaffirm the role of the network carriers as pivotal in Europe, but he stated the new challenge, “no longer will we respond to the title ‘legacy carriers’. It is true that, collectively, we have the experience and the expertise, and this will place us at the forefront of the new order facing our industry”.

Strong performance by LCCs helps “curtail the severity of the decline in total traffic”: ICAO

Globally, ICAO reported a 3.1% reduction in worldwide passenger traffic in 2009, for the largest decline on record for the industry and the first negative growth of the global economy since the Great Depression of 1929 (data includes scheduled passenger traffic on airlines of Member States, including LCCs).

International traffic fell by about 3.9% while domestic traffic fell by 1.8%, according to ICAO, recording that double-digit domestic passenger traffic growth in the emerging markets of Asia and Latin America, and the relative strong performance of LCCs in North America, Europe and Asia Pacific, helped “curtail the severity of the decline in total traffic”.

Premium fares and premium travel growth in negative territory in 2009

While European passenger traffic numbers overall have returned to growth at the end of 2009, this has occurred in economy seats, not at the high-yielding front of the aircraft.

Economy passenger numbers (representing over 91% of total international passenger numbers) have now recovered 4% above the 2009 low point, but are still approximately 6% lower than in early 2008. Premium travel was down 18.5% year-on-year within Europe in Nov-2009, according to IATA. 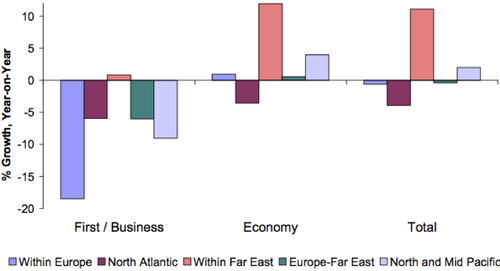 On average, premium passenger numbers generally represent less than 10% of total travel, but approximately 30% of passenger revenues for most network airlines. In Nov-2009, IATA reported an 18.5% year-on-year reduction in premium traffic growth (with a 26.1% reduction in the 11 months to Nov-2009); intra-Europe comprised 22.5% of total international premium traffic, but only 6.9% of premium revenue. At the start of Jan-2008, those proportions were 25.6% and 10.5%, respectively. 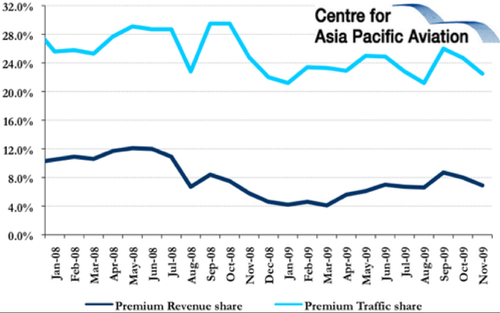 Reviewing the monthly yield/unit revenue growth developments among the carriers that report such data on a monthly basis shows an interesting picture: through the early stages of the economic crisis (in late 2008/early 2009), the yields at Air Berlin and Norwegian Air Shuttle (both LCCs) were considerably more resilient than their network carrier counterparts in British Airways and SAS, as premium demand evaporated, or shifted to lower cost options, such as economy travel or LCCs.

The tide is now turning, with year-on-year yield growth at the LCCs negatively impacted, due to comparisons against a strong period of yield growth this time last year along with weak signs of the start of a recovery in premium demand at the network carriers. The big concern however, as suggested by the AEA and others, is that the level of activity in premium markets will not return to pre-crisis levels. Airlines are now confronting a future of a smaller premium revenue pie and more players seeking a slice (ie LCCs that have increased their relevance to business travellers via GDS participations and business-friendly schedules/products).

The bottom line: reliance on yield to restore viability will be fruitless. The only way to improve margins will be to reduce costs – while retaining quality. 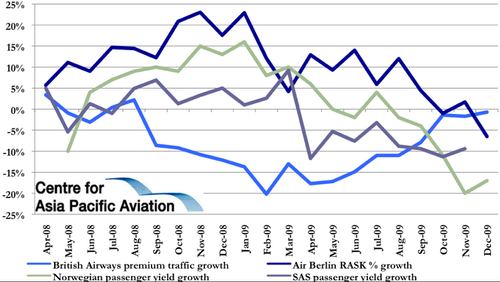 The remainder of this report is available for Peanuts! Weekly subscribers, or by direct purchase. Click here for the full article.