IATA, in its Feb/Mar-2011 Airlines Finance Monitor, stated airline share prices have lost 10% so far this year, as financial markets worry about exposure to rising oil costs. This compares with a 3% gain in equity markets over the same period, meaning airline shares are underperforming the market by around 13%. This follows a strong outperformance by airline stocks during 2010, when the global airlines index rose 28%.

The share price trends indicate that the negative correlation of airline shares with oil prices has returned. In the past month, the Bloomberg global airlines index has lost a further 4%. European airline shares lost the most of the major regions as weak home markets make recouping higher fuel costs increasingly difficult. 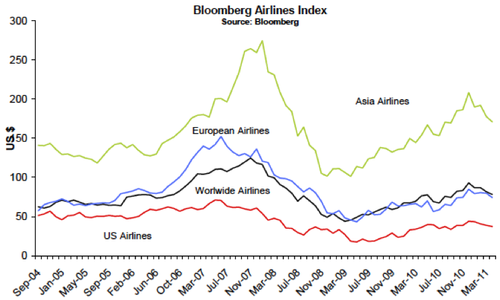 During Mar-2011, the jet kerosene price rose to average USD134 a barrel. While this remains below the Jul-2008 peak of USD180/barrel, it is more than three times the low point of early 2009.

Hedging will have offered some protection but this remains a very substantial rise in costs. Unrest in Libya and elsewhere in MENA provided the supply shock that took oil prices above USD100 a barrel. Meanwhile, the widening in the crack spread at the end of Mar-2011 may have been due to the shutdown of significant refinery capacity in Japan, following the 11 March earthquake. 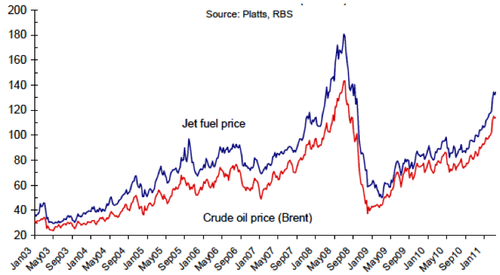 IATA last month downgraded its 2011 profit forecast from the USD9.1 billion profit projected in Dec-2010 to USD8.6 billion. The reason for the reduce profit forecast relates directly to the increased cost of oil. IATA noted that “oil is the biggest risk. If rises stall the global economic expansion, the outlook will deteriorate very quickly.”

“Rising oil prices are always a challenge for airline profitability. If they are accompanied by strong growing economies and world trade, airlines have some opportunity to command prices that can offset the rising fuel costs. If, however, rising energy prices stall global economic growth there is a strong downside risk to this forecast. With oil prices now being driven by speculation on geopolitical events in the Middle East rather than strengthening economic growth, this is a significant downside risk,” Director General Giovanni stated.

The negative influence of rising fuel prices was evident in 4Q2010, with the improvement of airline profits slowing sharply in the quarter, as fuel prices were already squeezing profit margins.

The improvement of less than USD3 billion in 4Q2010 net post-tax profits compares with a USD9 billion 3Q2010 improvement. However, North American airlines do seem to have kept up the gains in profit, at least at the EBIT level. Improvement has slowed markedly in Asia and Europe.

Average international fares and US passenger yields have continued to rise in recent months. The average fare has strengthened 7% between Sep-2010 and Feb-2011. Passenger yields for US airlines have risen 3% over the same period.

That 7% rise in fare compares with a 70% rise in jet kerosene prices over the same period. For much of 2010 airlines were able to recoup rising fuel costs with this clearly not the case in 2011. “The most recent surge has clearly not been recouped. The rise in fuel costs has been very large but falling load factors may be undermining the ability of airlines to recoup these costs,” IATA noted. 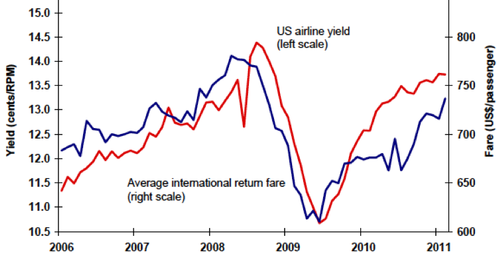 IATA stated the number of jets and turboprops delivered and retired in the first two months of 2011 stood stable with 83 and 11 respectively. However, the number of aircraft stored moved from 54 to 3 in Feb-2011.

As a result the fleet in service expanded by some 1% in Mar-2011 adding extra capacity. Aircraft delivered so far this year represent about 12% of the total deliveries schedule for this year. The bulk of deliveries are destined for Asia Pacific and Europe. 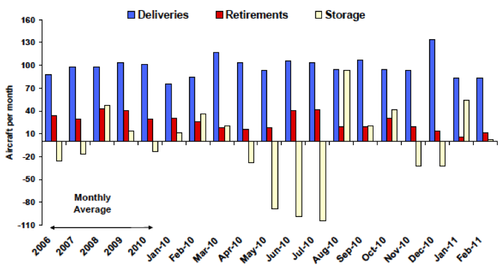 Capacity on both passenger and freight markets is now running ahead of traffic demand. IATA also estimated that the political unrest in the Middle East and Africa has cut international traffic figure by some 1%.

However, IATA anticipated that adjustments would occur in the months ahead as some airlines have announced reductions in planned capacity effective later this year. 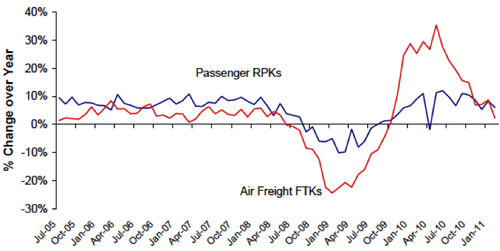 This lag between demand and capacity has changed the supply-demand conditions for the air travel market. After reaching a record high level in mid-2010, load factors are now slipping. IATA warned that “in this condition it becomes more difficult for airlines to recover the latest rise in jet fuel prices”. Cargo load factors have also continued to decline from their peak. 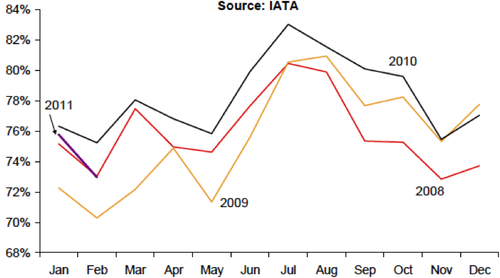 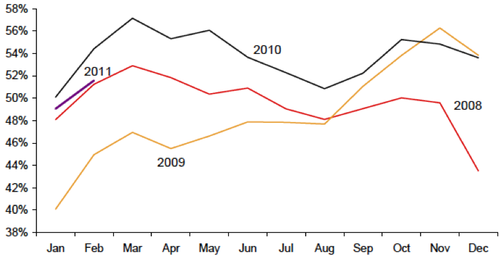