IATA, in its July-August Airlines Financial Monitor, stated airline share prices have increased 73% from the lows of 2009, due to improved profitability among the worlds’ airlines and outperforming the broader equity market.

The industry body added: "Since the bottom of the airline cycle in Q1 last year airline share prices, on the Bloomberg global index, have risen 73% outperforming the MSCI Global Index by a factor of two. Year to date airline shares are up 13% while the MSCI Index is down 4%. Clearly financial markets are expecting much improved financial performance from airlines in the upturn phase of this cycle."  However IATA added that difference still exist by region, adding: "Markets are positive on Asian and US airlines but European airline share prices are lagging." 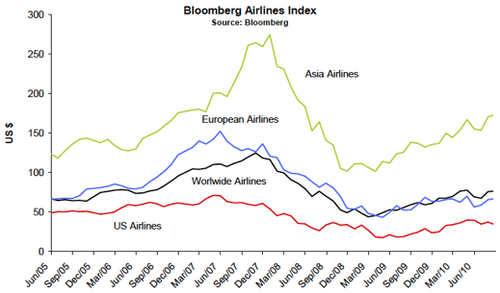 IATA added that airlines in North America and Asia Pacific have seen the largest performance improvement – with operating profits of USD1.7 billion and USD1.2 billion based on available data – compared with losses of USD514 million and USD322 million in 2Q2009. European airline net profits of USD1.0 billion were boosted by an USD1.3 billion asset sale in the second quarter, without which there would have been further losses.

Average fares rising but still down on pre-recession peak

According to IATA – and echoed in individual carriers’ traffic/financial reports – fares on international markets have risen on the back of returning demand, with average one-way economy fares now 15% up on last year’s low at USD286.

Meanwhile, premium fares, typically four times the price of economy seats, have risen by a lower 10% by mid-year over 2009 levels, and remain “some 20%” below pre-recession highs”. IATA also added that despite the increases average fares are still down on pre-recession levels, with economy fares 5% below this level, unlike travel volume which has now returned to pre-crisis levels.

IATA also warned that average fare increases are now slowing, commenting: “There is much volatility but also signs that stabilising load factors, and therefore supply-demand conditions, are slowing the recent rise in fares." 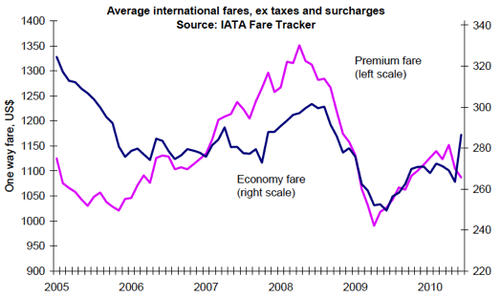 IATA also raised concerns about the potential for future oil price increases, with carriers, in their second quarter financial reports, echoing the concerns. Jet fuel prices have continued to fluctuate around USD87/barrel average of past 12 months

IATA stated the past 12 months have been “unusually tranquil” in oil and jet fuel markets, compared with the 2H2007 to 1H2009 period. Crude oil prices have fluctuated around a flat trend at USD76/barrel and jet fuel prices around USD87/barrel, with IATA commenting: “Both with a relatively low standard deviation of US4-5/barrel. The ‘crack spread’ remains historically low at 15%. Jet fuel prices are similar to the 2006-07 period."

However, the association warned that forward curves and most forecasts suggest relatively little change in the next year, but the long-term trend remains upwards. 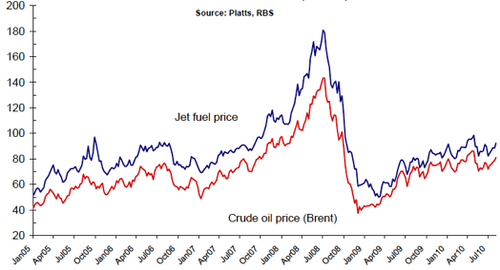 While airlines have generally been careful regarding their capacity management throughout the crisis (little capacity was added in 2009), IATA noted that since May-2010, there has been a “notable” increase in the number of aircraft being taken out of storage.

In Jun-2010 and Jul-2010, more than 40 of the aircraft taken out of storage were being retired rather than brought back into service, although deliveries of new aircraft remain at or above 100 a month and, since the start of the year the in-service fleet has grown by 2%.

IATA, however, expressed concern that “lots of new aircraft have been ordered”, with a “threat of excess capacity” now existing. However, IATA added that “published schedules suggest capacity growth will remain in line with demand”.

IATA also commented that since passenger capacity on international markets has expanded by 5% since the start of 2010, with a 9% increase in freight capacity, “there must have been some improvements in aircraft utilization, which is encouraging”. 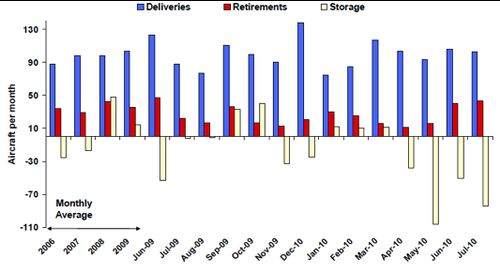 IATA also reiterated demand, capacity, load factor and freight data for Jul-2010, adding that air transport demand, like the economy, is now entering a slower growth phase but is remaining above trend. IATA also commented that passenger load factors “still look very good compared with previous years and the previous cycle high in 2007” although a stabilisation is expected.

The outlook for the aviation industry is improving, with investors also betting on a strong recovery in the highly cyclical aviation business. The improved outlook has occurred among stronger financing results amid growing passenger traffic and improved economic conditions, after the industry took a battering through the global economic downturn in 2008-2009.

The steady recovery has prompted IATA to upgrade its profitability forecast for 2010, to a collective industry annual net profit of USD2.5 billion, up from the USD2.8 billion loss it had forecast only in Mar-2010.

However, the industry still remains weak, with a number of recent failures – with Mexicana and Sama ceasing operations and Aer Arran being placed in interim examinership in the past couple of weeks – highlighting the fragility of the industry.