IATA, in its June/July Airlines Financial Monitor, stated airline share prices have risen during the past month, “reaching a level 10% higher than the beginning of the year." The industry body added: “Geography is still playing a role, with Asia Pacific and US airline shares now up over 9-11% since the beginning of the year on the back of much improved operating conditions, whereas European airline stocks are up barely 1% over the same period,” 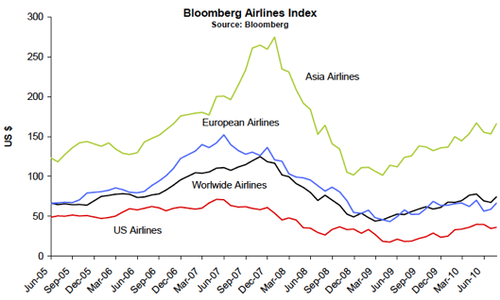 IATA, in the Financial Monitor, also provided a running update on airline 2Q2010 financial results by region. While it is still early in the reporting season, IATA added that, with several large US airlines announcing results, “we can see that profitability is much improved in Q2.” The 11 airlines in North America that have reported so far have generated combined net profits of almost USD1.5 billion compared to losses of USD500 million in 2Q2Q09.

IATA added that, in other regions, “the early signs are encouraging with both Asia and Europe moving into operating profits”. However, on a less positive note, IATA commented: “Europe still appears to be suffering at the net level”.

Average fares rising but still down on pre-recession peak

According to IATA (and as echoed in individual carriers’ traffic/financial reports), fares on international markets have risen on the back of returning demand and “relatively tight” supply conditions, although this growth rate stepped down in May-2010. Additionally, while fares have risen from their recession trough, they still remain around 15% below their pre-recession peak of mid-2008.

IATA continued: “Premium fares rose 8.5% compared to year-earlier levels and economy fares were up 4.5%. This is slower growth than seen in April, but could be due to data volatility. Data on US airlines reported by the ATA shows an acceleration in fare growth in both premium and economy markets over June-July so this dip may be reversed with next month’s data.” 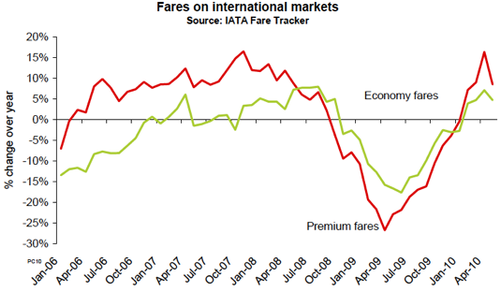 IATA also raised concerns about the potential for future oil price increases, with carriers, in their second quarter financial reports, echoing the concerns.

On 02-Aug-2010, crude oil for Sep-2010 delivery rose 3% to close at USD81.34/barrel on the New York Mercantile Exchange, reaching a 12-week high. It is the first time crude futures have settled above USD80 since May-2010, after strong manufacturing-sector data renewed optimism of a global economic recovery.

Meanwhile, IATA commented that by late Jul-2010, jet fuel prices sat near the lower end of the USD80-100 range seen since the beginning of this year, although “even at this level, the average price for the year to date is 24% higher than for the full year 2009”. IATA continued: “Mixed economic news in the US and Europe may partly temper upward pressure on oil prices, but growth continues apace in other regions increasing energy demand.” 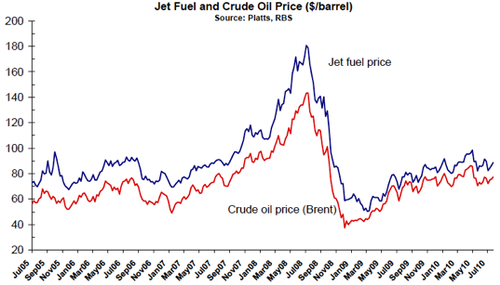 While airlines have generally been careful regarding their capacity management throughout the crisis, IATA expressed concern that recent aircraft orders and the removal of aircraft from storage will upset this balance. 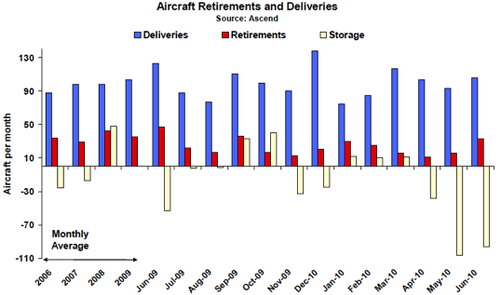 IATA stated that for the second month running, close to 100 aircraft were removed from storage in Jun-2010, most of which will return to active service, with a further 106 new aircraft being delivered in the month. Retirements were up slightly to 33 in Jun-2010, although IATA added: “Even so the fleet is expanding at a rapid rate”.

IATA continued: “This increased capacity may be coming on stream to meet peak season demand and could also indicate airline confidence in further recovery in markets. But it could also signal a softer load factor and yield environment ahead”.

Regarding the orders and commitments for over 400 large aircraft at the Jul-2010 Farnborough Airshow, IATA commented that the orders indicate that the industry sees significant growth ahead”, but warned that they may “make the challenge of matching supply to demand much more difficult”.

IATA also reiterated demand, capacity, load factor and freight data for Jun-2010, adding that passenger capacity is increasing in pace with demand growth “for now”, but warning that “careful decisions on further additions to capacity will need to be made, especially if demand growth slows over the second half of the year”.