IATA’s latest financial forecast for the world’s airlines, published on 23-Sep-2013, looks into 2014 for the first time. If IATA is right, next year will see the industry’s second highest operating margin since 1999 and will be its fifth successive year of positive net profit. This would be an unprecedented sequence this century.

It is tempting to point to history and to conclude that this means another down-swing in the airline profit cycle cannot be too far away.

However, although the industry is not yet covering its cost of capital, there is cause for moderating the cynicism traditionally developed by observers of the industry’s financial performance. It seems that airlines are achieving better margins than in the past from current levels of world GDP growth and that they are achieving better margins than might be predicted by our Capacity Index (a measure of overall fleet capacity utilisation). Are we witnessing a structural improvement in world airline profitability?

By contrast, the immediate prospects are not so bright. IATA’s Sep-2013 financial forecast for 2013 represents a modest downgrade relative to its Jun-2013 forecast. Nevertheless, its net profit forecast of USD11.7 million, while 8% below the previous forecast, is still higher than its USD10.6 million estimate in Mar-2013. It is also 57% higher than the net profit for 2012. As a percentage of revenues, it now forecasts a net margin of 1.6%, down from 1.8%, and an operating margin of 3.2%.

Weaker revenue outlook is due to the economic outlook

The slightly softer revenue outlook is mainly the result of a slightly softer outlook for world economic growth. It is now using a world GDP growth forecast for 2013 of 2.0%, down by 0.2 ppts from its previous forecast (and 2012’s actual growth) of 2.2%. This has led to IATA shaving its passenger traffic growth forecast from 5.3% to 5.0%. This is below the long term average passenger traffic growth rate of 6.0%, but it is closer to its average than the world GDP forecast is to its average rate of 3.1%.

Over the past 40 years, average world RPK growth has been almost twice average world GDP growth, but the multiple was 2.4 times in the period 2010 to 2012 and IATA’s 2013 forecast implies a multiple of 2.5 times. Evidence, perhaps, that this most economically cyclical of industries is becoming a little more robust to changes in world GDP? Or a reflection of the greater share of emerging markets of world traffic and their greater importance in driving traffic growth?

IATA also sees a softer outlook for passenger yield growth, forecasting this to be flat in 2013. It continues to forecast passenger load factor of more than 80%, but has trimmed its estimate by 0.1 ppts to 80.1%.

The story for cargo traffic growth is very different as its share of airline revenues continues its long term decline (see chart below). IATA now expects growth of less than 1% in 2013, reducing its forecast by 0.6 ppts from its Jun-2013 forecast and by 1.8 ppts from its Mar-2013 forecast. It has also lowered its forecast of cargo yield growth, from -2.0% to -4.9%.

World trade and industrial production have not picked up as expected, particularly in the emerging economies, hitting cargo demand in Asia-Pacific, where cargo is an important revenue stream. 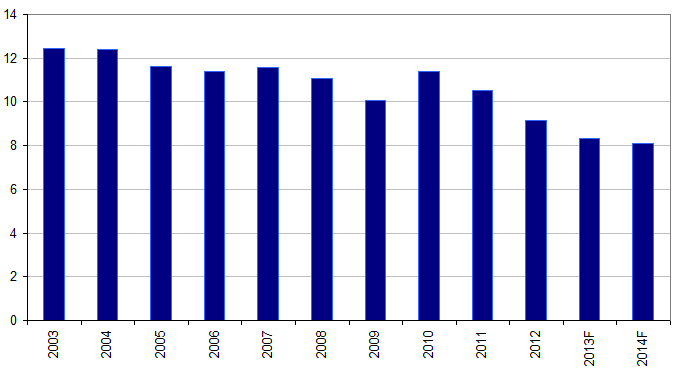 Although the oil price outlook is now slightly higher than previously, jet fuel prices have eased a little and IATA’s industry cost forecasts are virtually unchanged from Jun-2013.

North America is forecast to be most profitable region

Although IATA’s regional traffic forecasts continue to see higher growth in the emerging economies of the Middle East, Africa, Asia-Pacific and Latin America compared with the developed markets of Europe and (in particular) North America, there is generally a strengthening trend in the developed economies. In addition, consolidation in North America is a major factor in IATA’s forecast that North American airlines will be the most profitable in 2013 and 2014.

Regarding Asia-Pacific, IATA notes that its airlines “are a very mixed bag, with for instance strong performance in Japan following restructuring, but overall we expect no better than a small rise of profits in this region”.

Further profit growth is forecast to take margins above mid-cycle

IATA’s Sep-2013 forecast sees it adding estimates for 2014 for the first time. With GDP growth forecast to accelerate to 2.7%, still below the long term average of 3.1%, it expects passenger traffic growth of 5.8%, close to its 6.0% average rate. It also expects further gains in passenger load factor to 80.7%. IATA sees cargo traffic growth picking up to 3.7%, but forecasts a decline in yields for both passenger and cargo in 2014. On the cost side, a modest fall in oil prices is forecast, with little change expected in non-fuel cost per ATK.

*Forecast as of Sep-2013
Source: CAPA – Centre for Aviation, IATA

Is the relationship between margins and GDP improving?

The expectation of above mid-cycle margins when global GDP growth has not yet returned to its long term trend rate suggests that we may be witnessing a structural improvement in industry profitability. It seems that the world’s airlines are generating higher rates of passenger traffic growth and higher levels of profitability from a given rate of world GDP growth than in the past (and when fuel costs are at historically high levels). 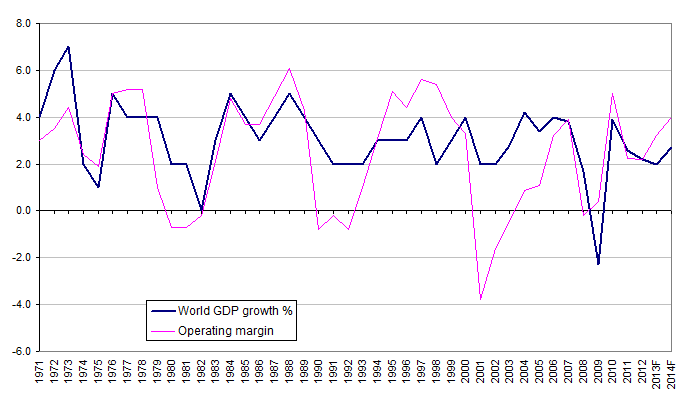 Analysis of the development of the world airline fleet supports the contention that the industry is going through a structural improvement in its profits cycle. As we suggested in a report in Feb-2013, capacity restraint was the key to reducing the margin impact of the GDP-driven demand cycle in the global airline industry, thereby improving the relationship between industry margins and world GDP growth. We now put IATA’s financial forecasts into the context of the fleet capacity analysis introduced in that report.

The previously highly cyclical pattern of aircraft deliveries has flattened out significantly over the past decade. Orders however still display this cyclicality, which has changed little over the past four decades. However, whereas deliveries used to display distinct peaks a couple of years after each peak in orders, they are now much smoother.

Although orders were at very high levels from 2005 to 2012, with the exception of 2009 and 2010, deliveries have remained at just above 5% of the fleet for the whole of the past decade. This is in contrast with previous decades, when deliveries rose to peaks of 7%-8% of the fleet and fell to troughs of 4%. This smoothing out of the deliveries curve is largely the result of the significant increase in the production backlog enjoyed by the airframe manufacturers.

World airline industry aircraft orders and deliveries as a percentage of total fleet: 1972-2012 and forecast 2013-2014 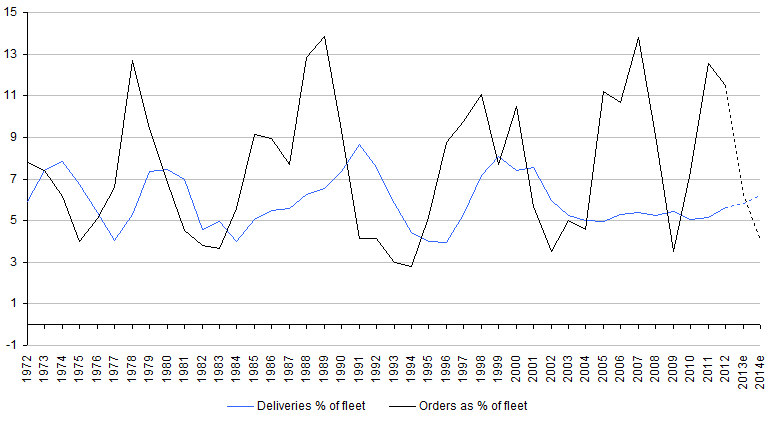 Forecasts by The Airline Monitor see deliveries as a percentage of the fleet tracking upwards over the next two years, but remaining well below historic peaks (and orders are forecast to decline). Moreover, retirements have been at or above their historic peak level of 2% of the fleet for a number of years and reached a new high of 2.7% in 2012. This has largely been driven by the need to replace ageing, fuel inefficient aircraft in an era of high oil prices.

The Airline Monitor forecasts that retirements will continue to rise, with the net impact being that fleet growth will continue roughly in the historically low level 3% to 3.5% corridor that it has now occupied for almost a decade. In the past, fleet growth displayed a far more cyclical pattern, rising almost to 8% and falling to 3%.

World airline industry aircraft deliveries and retirements as a percentage of total fleet and fleet growth: 1972-2012 and forecast 2013-2014 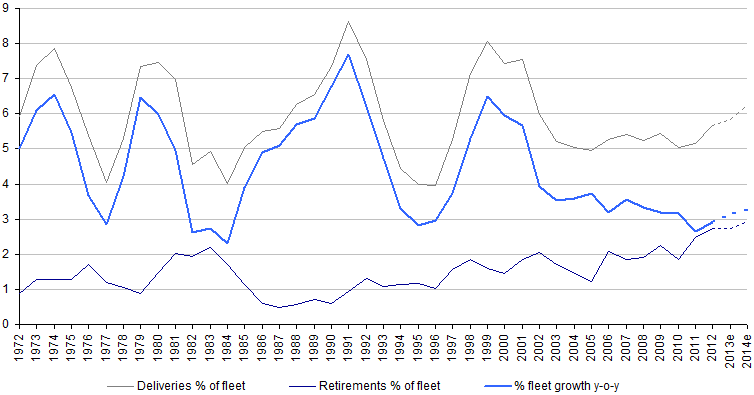 Growth in fleet capacity is low by historic standards and is becoming less cyclical. In addition, passenger load factor has continued its long term upward trend and reached new highs.

However, as noted in our Feb-2013 report, a fuller view of capacity utilisation also needs to include how many hours per day aircraft are utilised and the percentage of the fleet that is actually flying and not in storage. Neither of these two measures is at historically high levels. Moreover, they both follow a cyclical pattern and appear to be on an underlying downward path (see chart below).

Three measures of capacity utilisation for the global airline fleet: load factor (%), flown hours per day (as a % of the maximum) and aircraft in use (as a % of the total fleet): 1972 to 2012 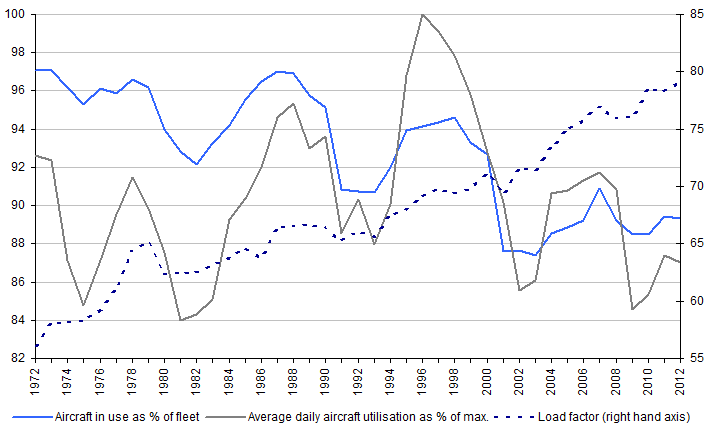 In our Feb-2013 report, we also introduced the CAPA Capacity Index, which combines these three measures of capacity utilisation and which demonstrates a close relationship with world airline operating margins (see chart below). A significant divergence between the two curves in our chart is often explained by a big change in fuel costs. We can use IATA’s traffic growth forecasts and the fleet growth forecasts from The Airline Monitor to forecast the development of the Capacity Index over the next two years.

The Index is an overall measure of the world airline fleet’s capacity utilisation and should rise in 2013 and 2014 because passenger traffic growth is forecast to be higher than fleet growth. In 2012, the Capacity Index and industry margins were at mid-cycle levels and both should rise above mid-cycle in 2013 and 2014. However, the Capacity Index is set to remain well short of historic peak levels in the next two years, whereas IATA expects operating margins to approach their peaks more closely. 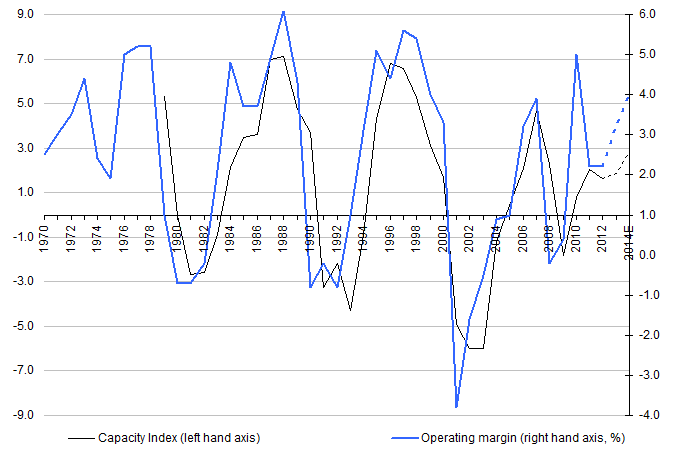 The chart above also suggests that, perhaps, the relationship between the Capacity Index and margins is changing: it seems that the airline industry is now achieving better margins from a given level of capacity utilisation than in the past, possibly as a result of a greater cost focus (and helped by some easing of fuel prices).

We explored above the possibility that better capacity utilisation is allowing the industry a higher margin from a given rate of world GDP growth. More time is needed to confirm the trends that we have analysed and, before anyone gets carried away, IATA reminds us that the industry’s return on invested capital still falls short of its weighted average cost of capital (WACC).

However, it just might be possible that a fundamentally more profitable airline industry is emerging from the series of traumas it has experienced since 2001.

Return on capital invested in airlines and their cost of capital 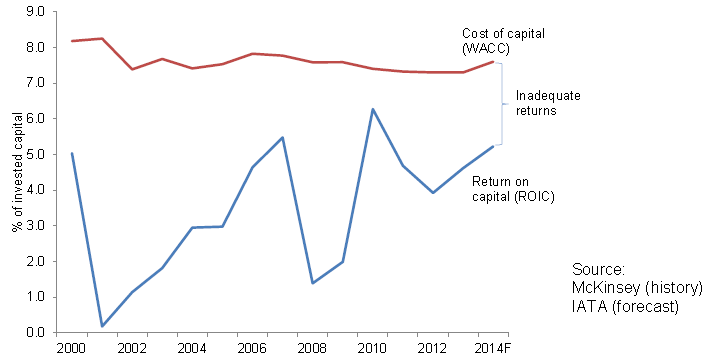 See related report: IATA raises profit forecasts - the world’s airlines can now upgrade from an espresso to a sandwich